Goddess is at the foundation of every religious and spiritual tradition from earliest times. The origin of everything is the Divine Mother. This is certainly a bold statement to make, and yet it does warrant consideration. What if the roots of yogic philosophy go even further back and extend outside of South Asia?  Who are the Goddesses of the Kaula and Shakta traditions who share symbols, iconography, and qualities with much earlier and cross-cultural forms? What can we learn from early Goddess civilizations in Africa, Old Europe, Anatolia, the Near East, Ancient Greece and the Indus Sarasvati Valley?

In this course, we will look at the evolution of Goddess beginning with our human origins in Africa. Using an interdisciplinary approach, we will examine archaeology, art, mythology, history, and ritual in our consideration of Goddess connections between Paleolithic, Neolithic and Bronze Age cultures into the early Kaula and Śakta period of South Asia.  We will also look to textual sources (Rg Veda and Devi Mahatmyam) and the prevalence, significance, and function of Devi (Goddess) within these texts. Over 30,000 years of non-textual evidence will offer an alternate and essential understanding of prehistory, history, and goddess-centered cultures across continents and millennia.

History may have been written “by and for the victors”, however this much-needed course opens the conversation to include more than half of the human race and more than 80% of our human history that, for the most part, have been omitted from the discussion.

Module 1: The Great Cosmic Yoni and the Dark Mother
Mother Goddess Roots in Africa and Paleolithic and Neolithic Goddesses of the Danube Civilization This class will consider the origin and evolution of the earliest and perhaps most ubiquitous and powerful religious symbol on the planet, the pubic V known in South Asia as the Yoni. We will consider how for over 50,000 years the Yoni is not only a symbol of the mysteries of life, sex, and death, but is also continuously venerated as an emanation of the Divine Mother. Laura will present an overview of the Mother as the Dark Goddess and the prevalence and significance of Her “sacred display” in cultures around the world since earliest times. We will consider African migrations as evident through DNA research (and the work of Lucia C. Birnbaum and L. Cavalli Sforza) into the Eurasian continents, then look to the groundbreaking research of Marija Gimbutas and the peaceful egalitarian cultures of Old Europe or the Danube Civilization. Students will be encouraged to consider the name/s and history of Goddess in their own ethnic, racial and ancestral lineages.
Module 2: Matriarchy, Matrilineality and Women’s Blood Mysteries
We will examine two often controversial and dismissed areas of scholarship and female experience: matriarchy and menstruation as foundational to Goddess traditions of earliest times into the current age. Students will be introduced to essential terms and definitions of matriarchy from economic, social, political and spiritual perspectives that will show that matriarchy is not the opposite of patriarchy. We will look to archaelogical discoveries, art and rituals that center around women’s blood mysteries.
Module 3: Goddesses of the Indus Sarasvati Valley Civilization & Goddess-centered Civilizations of the Bronze Age
This class will show continuity of ancient Goddess and female-centered symbols rooted in Africa, extending into Old Europe and a brief overview of the many Goddess civilizations of other regions (i.e. Anatolia, Ancient Near East, Crete). Our main focus will be on the rich archaeological discoveries of the Indus Sarasvati Valley Civilization (a proliferation of female figurines, art and seal stones) that include many images that may be some of the earliest examples of important Shakta Tantric icons on the subcontinent that are still worshiped to this day. In module three, we encounter the enlightening breath-centered methods described in sacred Tantric contemplative teachings. An introduction to the poets, seers and texts of Kashmiri Shaivism, such as the Shiva Sutras and Shree Vijnana Bhairava, yields a treasury of simple yet profound gestures of attention which draw the practitioner into the experiential contact with the infinite known as non-dual consciousness.
Module 4: Goddesses in the Vedas
In this class, we will look at the cosmology of the feminine principle and Goddesses in the Vedas: Vaac, Ushas, Aditi, and others. We will consider the role of and contributions of women during the Vedic period despite their being prohibited from reading the Vedas and performing Vedic rituals.
Module 5: Early Tantric Goddess Roots in South Asia
Fierce Mother Goddesses and Wild Goddess Collectives This class presents continued threads from earlier classes in its consideration of the indigenous and tribal Goddess worshiping South Asian people whose beliefs, rituals and deities became embedded and adapted within the Shakta and Tantric traditions. Lajja Gauris, Yakshis, Matrikas, and other wild Goddesses will be presented.
Module 6: The Shakta Tradition: The Devi Mahatmyam, Goddesses Kali and Durga
In this final class, we will look to the theology and cosmology of the Shakta tradition and consider its shared roots with early Goddess civilizations dating back over 30,000 years. We will be introduced to the Devi Mahatmyam, an epic 5th century Shakta text, not only as myth, but also as insight into history. To conclude we will acknowledge the myriad ways the Divine Mother Goddess has always prevailed, despite patriarchal attempts to repress, eclipse, and force Her underground over the last 5000 years. We will see, and hopefully come to embody, how the ancient foundations and evolution of Goddess traditions— as well as the omnipotence and omnipresence of the Divine Mother—offer wisdom and guidance we deeply need in these perilous and shifting times. 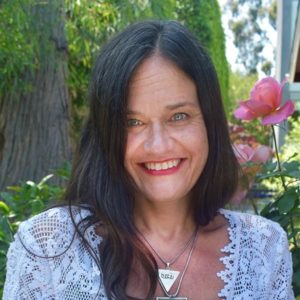 Laura Amazzone, M.A. is a teacher, writer, intuitive healer, yogini and initiated priestess in the Shakta Tantra and Kaula Sri Vidya traditions of India and Nepal. She is the author of the award-winning book, ÒGoddess Durga and Sacred Female Power.Ó She has published numerous articles within the fields of Hinduism, Tantra and WomenÕs Spirituality in many different encyclopedias, anthologies, journals and also online publications. Laura teaches in the Yoga Philosophy Program at Loyola Marymount University in Los Angeles. She offers a diverse array of authentic and undiluted lineage-based rituals and spiritual practices as well as pilgrimages to Nepal that promote spiritual empowerment and divine embodiment. Lauraamazzone.com