Bob Doto on Yogalebrity Culture, the Babarazzi, and the Spectacle (#13)

In this interview, I had the pleasure of speaking with Bob Doto, who is the owner and director of Church Avenue Yoga and Bodywork Center in Brooklyn, New York City. He is a yoga instructor and massage therapist, who has been practicing Ashtanga Yoga under the guidance of Eddie Stern. Bob is a prolific writer on body-centered spirituality. He is a founding member of The Babarazzi; was the Managing Editor of internationally acclaimed journal of religious studies, Parabola; and was a founding member of the elusive post-art-punk band SPRCSS. Bob received his MFA in Writing & Poetics from Naropa University’s “Jack Kerouac School of Disembodied Poetics” in 2002, and is a graduate of the Pacific College of Oriental Medicine.

We met at his home in Brooklyn to chat about the yoga celebrity culture, The Babarazzi project, the spectacle, and a little bit about anarcho-mysticism. 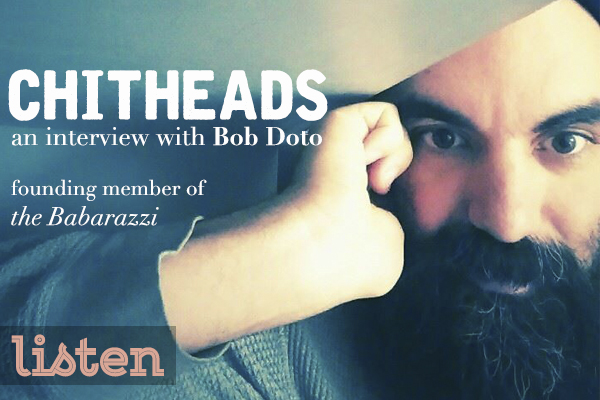 As I often do, I began by asking Bob about the beginnings of

his yoga journey. He shared that during his teenage years, he was drawn to various spiritual and philosophical traditions but was more interested in the things he could do “from the couch”. Asana, then, was a later love that he resisted for some time, knowing somehow that it was going to be a big deal in his life.

I wasted no time diving into the juicy discussions surrounding a project that Bob was a founding member of: The Babarazzi. The Babarazzi was a website that took to task the emerging yoga celebrity culture and responded to the images and messages that were being released in the commercial domain of yoga culture.

Bob pointed out that the site was never directed at the practice in any way but was rather concerned with all of the chatter circulating around the practice, much of which was focused on branding and product-selling.

He describes the motivation behind the site as drawing from a celebrity’s call to be seen. “Look at me, look at me” is the underlying message in all celebrity culture, and therefore Bob and other founding members of The Babarazzi decided to listen, to look at them, and to offer a response to what they saw.

Now that The Babarazzi has ceased publishing new content, “is there still a need for a voice like this in the wider cultural conversation?” I asked him. “As long as the feeling is that celebrity culture is creeping into the experience of the practice, then yes, that voice is necessary.” I confirmed with Bob that, according to my view, this commercialization is most definitely creeping into the experience of the practice. Not for all, but enough for us to be critically concerned.

One of my favorite insights that Bob offered was his critique of the resistance to critique that we find evident in certain segments of yoga culture. The idea that we shouldn’t be critical of one another “is bullshit”, according to Bob, who remarked that the sadhus, for example, are incredibly critical and provocative members of society. Critical discourse and interaction is evident across the yoga philosophical and mythological traditions, and Bob thinks that this resistance to criticism comes from “spa culture”, which he sees as layering onto yoga an artificial “preciousness”.

The rest of our discussion was wide ranging across this topic of yoga’s commercialization and our general experience of the “spectacle”, which is the name Guy Debord used for the representations of social life propagated by capitalist structures. I asked Bob if he would compare this idea to the concept of “maya” (or illusion), to which he responded with an interesting point. We must remember that simply because something is illusion does not make it “unreal”. Illusion still requires our engagement, because it has a very real effect on the conditions of our lives. It is a mistake to think that something being an illusion means we can ignore it.

“Illusion is real, and it’s out to getcha,” Bob says. With that playful but insightful sound bite, we ended our fascinating and prescient conversation.

To find out more about Bob:

PREVIOUS Episode #11
Edwin Bryant on the Yoga Sutras, Bhagavad Gita, and the Multiplicity of the Absolute (#11)
NEXT