Christopher Wallis on Tantra, Non-Dualism, and Awakening to Your True Nature (#14)

In this episode, I had the pleasure of interviewing Christopher Wallis, whose work I discovered through my own research into the Tantrik tradition. Christopher, also known as Hareesh, was introduced to Indian spirituality at the age of seven and initiated into the practice of yogic meditation at sixteen. His degrees include a B.A. in Religion and Classics from the University of Rochester, an M.A. in Sanskrit from U.C. Berkeley, an M.Phil. in Classical Indian Religions from Oxford, and a Ph.D. on the traditions of Śaiva Tantra from Berkeley. He received traditional education at yoga āshrams in upstate New York and India in meditation, kīrtan, mantra-science, āsana, karma-yoga, and more. He currently teaches meditation, yoga darśana (philosophy), Tantrik philosophy, Sanskrit, mantra-science, and offers spiritual counseling. 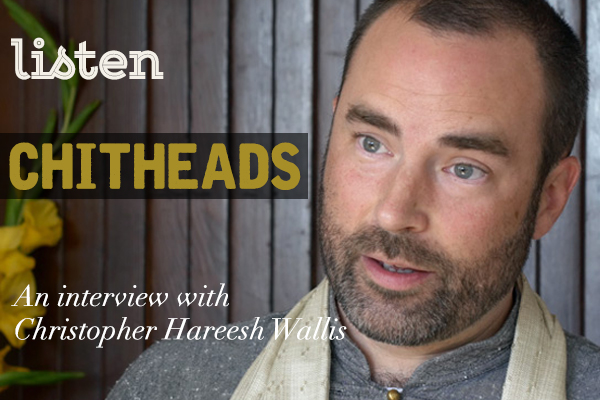 Hareesh is the Founder and Head Faculty of the Mattamayura Institute. His teachers, mentors, and gurus, in chronological order, include: Gurumayī Chidvilāsānandā, Paul Muller-Ortega; Alexis Sanderson; Marshall Rosenberg; Somadeva Vasudeva, Dharmabodhi Sarasvati; and Adyashanti. Hareesh is the author of Tantra Illuminated: The Philosophy, History, and Practice of a Timeless Tradition.

I first asked about Christopher’s book “Tantra Illuminated”, an exhaustive and informative introduction to the lineages of the Śaiva Tantra tradition. Christopher shared that he wrote the book “by invitation” from John Friend, who was seeking a resource for his teacher trainings that would introduce teachers to the depth and profundity of these lineage streams.

The book has, by now, taken on a life of its own and serves as the only book of its kind on the Saiva Tantra tradition. It has sold nearly 10,000 copies, mostly by word of mouth.

Christopher spoke about the divide in our culture between, on the one hand, hyper-intellectual scholarship of the tradition with very little interest in the practice and, on the other hand, practitioners with a very confused understanding of the wider tradition apart from the idiosyncratic teachings of a particular teacher. His work, among that of other scholar-practitioners, seeks to bridge this divide.

Christopher is unique among Western spiritual teachers in having grown up in the tradition of which he is a part. He was an “ashram brat”, spending his childhood with his parents in the Siddha Yoga community.

He recalls first hearing mantra the “Om Namah Shivaya” at seven years old, after which he had his first and only vision. Upon hearing the mantra, he closed his eyes and saw a being made entirely of blue light. This guru-type being appeared in an iridescent blue light body. When he was older, he encountered accounts of similar experiences of such a blue light being from members of the Śaiva tradition.

He had a teenage rebellion period in which he was skeptical of the tradition and thought it might not be for him, although he continued to go the Siddha ashram during this time. Then, at sixteen, he met Gurumayī Chidvilāsānandā, who became his first guru, which reignited his commitment to the tradition.

He didn’t go to college without knowing why, and therefore at 24 years old, he went to study with Paul Muller-Ortega and Douglas Brooks at the University of Rochester. He gravitated toward Paul, who he considers one of his most formative teachers.

He ultimately went to Oxford to study with Alexis Sanderson, the greatest scholar of Tantrik Śaivism. He ultimately received his PhD from U.C. Berkeley, but he decided he wasn’t solely interested in being a scholar but wanted to write for the practitioner audience.

Tantra was a movement that spread throughout Asia around the 7th and 8th centuries and transformed both Hinduism and Buddhism. It was a flourishing tradition but was largely wiped out by a series of invasions or was absorbed into the Hindu mainstream. Today, its influence still exists in Tibetan Buddhism and select parts of India.

Christopher describes the tradition as one that is attractive to practitioners not drawn to institutions, as the tradition is more grassroots in that way.

The Confusion of Hindu Tantra with “Neo-Tantra”

Christopher refers to a podcast, in which he goes into great depth regarding the confusion between original tantra and “neo-Tantra”, or the tantra that is mostly considered with enhancing sexual pleasure. He describes this neo-Tantra as a homonym of original tantra, meaning that the words look the sign, but they denote entirely different things.

The neo-Tantra tradition, while now a tradition in its own right, began based on probably a confusion about what original tantra was and the practices being espoused as a part of that tradition. He mentions that the images of Shiva and Shakti copulating are not intended to be taken literally but are representations of the goal of Tantrik practices, which is the intimate interconnection of awareness and energy. Shiva is awareness and Shakti is energy. The images of copulation encapsulate the whole goal of the path, which is to bring awareness and energy into perfect harmony. It depicts the union of the transcendent and the imminent.

Non-dualism, Hareesh says, is a bit like monism, but not quite. Monism means everything is one. Non-dualism means that there is a two-ness to reality that is in reality one. There appearsto be a dual reality, but they are in fact one. And to discover that experientially is the goal of the path.

The formless expresses as form, and these two apparently opposite things are at root one thing. The formless refers to the field of absolute potential, the the form is all the expressed forms of energy.

When we experience the seamless unity of this apparent two-ness, it leads to natural respect, compassion and love. When you experience unity, it’s different than believing in it.

Difference between Non-Dualism of Vedanta & Shaivism

I wanted to get Christopher’s take on the difference between Vedanta and Śaivism. Traditionally, he points out, Vedanta is an illusionist doctrine. The Absolute, according to Vedanta, is static and unchanging, and the changing world is illusory. Not so in Śaivism, in which the Absolute is dynamic. Will and Action and Desire are inherent to the Divine itself, and Diversity is seen not as illusory, but as an expression of the Divine. This makes Śaivism a poignant spiritual tradition for our time, given the need for a sensitivity to difference and diversity.

Teaching Vedanta as a part of Yoga is the result of a conflation of yoga with Hinduism, says Hareesh. The original Upanishads, however, do have a place in a history of yoga.

In a recent talk I attended of Christopher’s in Brooklyn, he had interesting things to say about the goal of the path as being translated as “enlightenment”. I asked him about that. Bodhi, he says, has been translated as “enlightenment”, which is problematic because it conflates the goal of this practice with Western ideas of “enlightenment”. When people hear the term, they assume it is kind of “download of wisdom”, which it doesn’t necessarily include. Someone can have true spiritual awakening without doing the integration work. You can awaken to the truth of your own being but still not be liberated from your psychological baggage, because they operate on two different levels.

The Tantrik tradition says that unless you’re going to go sit in a cave, you’re going to have to do the integration work, which is different from the process of awakening. It’s sometimes painful, sometimes joyful to integrate the awakening into your life.

Awakening to your true nature is a better translation of bodhi than “enlightenment”.

Christopher wrote an article, “A Hippie in Bhairava’s Clothing: The Dangers Of Cultural Appropriation” for Sutra Journal in March 2016 about Radiance Sutras, a book of poems by Lorin Roche inspired by the Vijnana Bhairava Tantra. It was purported to be a translation of the work, which Christopher went to great lengths in his article to show that it wasn’t. Christopher is concerned about practitioners seeing the text as a transmission or translation of the Vijnana Bhairava Tantra, when there isn’t already an available and accessible translation of the work. Wallis says it matters culturally and spiritually that the text be explicitly stated as not a translation, so that those who are interested in the substance of the text are not confused and misled.

Christopher lastly diagnosed the Western spiritual climate with being one oriented around “experiences” and spiritual highs. He remarks that the original Tantrik tradition offers spiritual technologies to shift your default state, to complete a paradigm shift in your ground of being. When the high is over, where do you land? Back where you started or in a shifted status quo. That’s what Tantra is interested in; not the fleeting experiences that come and go.

For more about Christopher:

PREVIOUS Episode #13
Bob Doto on Yogalebrity Culture, the Babarazzi, and the Spectacle (#13)
NEXT