Edwin Bryant on the Yoga Sutras, Bhagavad Gita, & the Multiplicity of the Absolute (#11)

My guest in the 11th episode of CHITHEADS is Professor Edwin Bryant. Edwin Bryant received his Ph.D in Indic languages and Cultures from Columbia University. He taught Hinduism at Harvard University for three years, and is presently the professor of Hinduism at Rutgers University where he teaches courses on Hindu philosophy and religion. He has received numerous awards and fellowships, published six books and authored a number of articles on Vedic history, yoga, and the Krishna tradition. In addition to his academic work for the scholarly community, Edwin’s Penguin World Classics translation of the Srimad Bhagavata Purana, the traditional source for the story of Krishna’s incarnation, is both for Indology specialists as well as students and those interested in Hinduism from the general reading public and the yoga community. 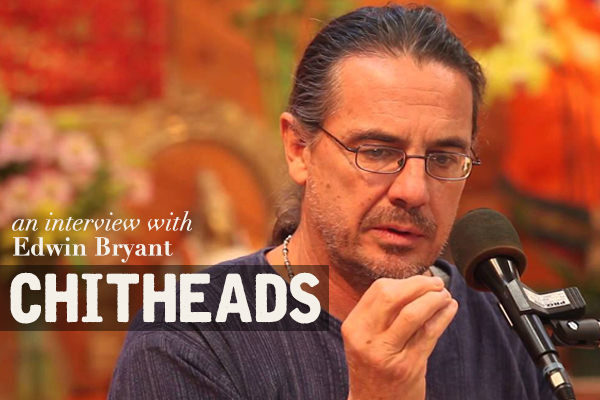 As a personal practitioner of yoga for 35 years, a number of them spent in India studying with traditional teachers, where he returns yearly, Edwin strives to combine academic scholarship and rigor with sensitivity towards traditional knowledge systems. In addition to his academic course load, Edwin currently teaches workshopson the Yoga Sutras, Bhagavad Gita, and Hindu Philosophy at yoga studios and teacher training courses throughout the country. His translation of and commentary on the Yoga Sutras of Patanjali (North Point Press, a division of Farrar, Straus & Giroux, 2009) is specifically dedicated to contributing to the growing body of literature on yoga by providing insights from the major pre-modern commentaries on the text with a view to grounding the teachings in their traditional context.

Edwin’s journey with yoga started out in a way familiar to curious seekers in the 1970s: he hitchhiked to India. He then spent a number of years in India which he speaks about as being very formative for him, and proceeded to live in an Ashram for several years. Ultimately, he became disillusioned with Ashram life due to politics, greed and familiar human failings, so he moved back to the United States to begin his academic studies at Columbia University. Years later, he now teaches at Rutgers and is a well respected scholar-practitioner in the Patanjalian Yoga and Bhakta traditions.

I was very interested to know about the conflict Edwin may have faced juggling the experiences of being both a scholar and a practitioner. We discussed how the world of sectarian devotion particular to Hindu lineages and the world of academic scholarship are not always happy bedfellows. Over the years, he has cultivated the ability to wear different hats based on his two different dharmas of being scholar and practitioner, but he also mentions how these two dharmas have complimented each other in certain situations.

Edwin remarked that there are unfortunate intolerances from both sides – from sectarian lineages toward academia and vice versa – and that it has been his choice to remain relatively silent on the subject of his practice within academia. He doesn’t deny it, when asked, and the fact of his practice is certainly public, but he chooses not to align with the “postmodern disclosure” of some of his colleagues. “One doesn’t feel compelled to share one’s sexual orientation, so why should one have to share his or her spiritual affiliation?”

I asked Edwin if he thought it was problematic that a text like Yoga Sutras (which calls for an un-yoking of the spirit from the material world) is being used as canonical in a tradition that’s focused on a much different objective than the Y.S., namely body-mind holism.

Edwin responded that he used to think it was problematic, but then he realized that this was intellectual snobbery and that there many people within the wider yoga community who were starting to take seriously the practices as they are outlined in the Sutras. “Even if only 5% take seriously the teachings of the Yoga Sutras, that’s still a huge amount of people.”

He also shared what I found to be an extremely helpful prescription for using the Yoga Sutras and the Bhagavad Gita, which, on their faces, offer very different images of what the yogic life looks like – one is renunciant, the other is for a householder. He describes the Yoga Sutras as a text to be used in the morning, before you begin your day, when you are silent and training the mind in yogic meditation. The Bhagavad Gita is your “9 to 5” text, when you are immersed in the world of relationships and action. The Yoga Sutras and the Bhagavad Gita describe different sorts of mental cultivation that are fruitful for different aspects of our lives.

I was then interested in getting Edwin’s thoughts on Isvara, which has been a hotly contested concept within the tradition. In Edwin’s translation, he convincingly argues that Isvara was a theistic notion. I was then curious to know if the desire to translate Isvara in a non-theistic way was based on a resistance to seeing yoga in a theistic way. He agreed and pointed out that many people came to yoga in a hangover from their abrahamic notion of God and therefore seek an alternative to that in the eastern traditions. Unfortunately, it has caused a distortion in the understanding of Isvara, which is recently being cleared up through scholarly work from Jonathan Dickens Styne (?) at the University of Boulder in Colorado.

While the BG is generally associated with the canon of Vedanta, Edwin actually sees it as aligning with the metaphysics of Sankhya and the purusha-Prakrti-Isvara triad. In his understanding, then, they are perfectly compatible, even if the Bhagavad Gita does offer an obviously more robust theism.

Edwin then led us into an interesting discussion of Vedanta, which is different from the yoga sutras in being extremely disparate in lineage and interpretation. Vedanta commentaries often conflict and offer alternative interpretations of key metaphysical concepts. This truth has been somewhat missed in the west, as the Vedanta imported here was what Edwin calls a neo-advaita form of Vedanta, which does not by itself represent the diversity of the tradition.

One key part of the discussion that I found especially interesting was Edwin’s thoughts on how dualism is often written off as a bad word, when there is no reason it should be. When we bring up dualism, we often bring it up as if it’s a negative thing, when in fact there’s no reason not to entertain the fact that the Absolute may, in fact, be multiple. Perhaps the old adage, “many paths, one truth”, is not accurate to the metaphysical realm. Why shouldn’t the absolute be multiple, variegated, thus making all the experiential objectives of the various spiritual traditions equally true and possible experiences. In other words, though a certain system, one may reach an impersonal realization of the absolute, whereas through another system of practice we may have a more personal experience of godhead. Why can’t all be equally possible at the level of the Absolute? Edwin points out that this attachment to the idea of ultimate oneness at the level of the absolute is an inheritance of neo-advaita Vedanta and the perennialist thinkers likes Huxley and others.

We then discussed Lila, and I asked Edwin to describe what the practice of Lila is like. He describes the different “bhavs” (or mindsets) one cultivates, depending on the type of relationship one can have with God. So there is the possibility of relating to god as a lover,  a son, and as a friend, for example. Those that decide on one of these relationships will choose to focus on those particular episodes (another meaning of Lila) that correspond to Krishna’s life as a child, friend or lover.

When the mind is completely absorbed in thoughts of God in one form or another, eventually the mind turns toward a particular relationship with God. Edwin describes this path as being one for those not interested in residing autonomously in their atman. This is the path of one who seeks relationship as an experience of divinity.

My last question revolved around the provocative discussion of whether or not the Bhagavad Gita is an injunction toward violence. Edwin first remarked that we should be honest about what the text actually says and the modern day allegorical interpretations are modern projections propagated by the theosophists, who took a mythological interpretation to all religious texts.

The battle of the Bhagavad Gita was a real battle, and the discussion hinges on a caste understanding of society, in which each individual has his or her duty to perform. This is no different for the warrior. In other words, a pacifist ethos is not original to the text but rather a later allegorical layering onto the Bhagavad Gita.

The Gita, in fact, is saying that sometimes it is necessary to use force and violence and this is still part of the practice of yoga. Edwin uses the example of a person with a gun coming into a yoga class and starting to shoot people. Most people would choose to act with force, if given the opportunity, because the greater violation of ahimsa would be not to act with force.

I finally got a satisfactory answer on this topic. The Bhagavad Gita is simply not the text for someone who cannot entertain the possibility of violence or force used with a just cause.

To find out more about Edwin:

PREVIOUS Episode #10
Manorama on the Guru/Student Relationship, Sanskrit, and Renunciate vs. Householder Paths (#10)
NEXT