If you practice yoga, it’s because of the Vedas. The Vedas are at the heart of Indian traditions of enlightened practice. Classical yoga, tantrika and bhakti lineages can trace their origin to the Vedas. The paths of self-inquiry that emerge from the Vedas all aim to awaken higher intelligence within your nervous system—by attuning it to the universal intelligence. This is enlightenment. To know the Vedas is to unlock the secrets of the universe within your own body-mind. Yet what the Vedas are and how best to approach learning about them often elude us. Are they “books?” Do they describe a philosophy or a science? And what do they have to do with your yoga practice? This 4-part course in the Vedas offers an experiential immersion in its enlightened principles, its contributions to the history of Sanskrit texts and traditions, and its ongoing relationship to authentic yoga practice. Students will gain a thorough understanding of the Vedic worldview, its core “texts” and teachings, as well as practical and traditional methods to relate the Vedas to your yoga and meditation practice.

Module 1: The Vedas and the Breath
The Vedas begin with the breath of God. “That One” (tad ekam) breathed and on the exhale released the creation. That breath can be heard within the pulse of creation as distinguishable “strings of sounds” or Sanskrit mantras. The Vedas are composed of these mantras as “that which is heard,” (śruti) or the vibrational code that makes up creation. In this first class, you’ll experience the Vedas not only as texts, but as the vibrational structure of creation. You’ll be introduced to the seven “authors” of the Vedas, the “seers” (ṛṣis) who “cognized” these underlying sounds of creation and organized them into four groups (saṁhitā) that they passed down orally through family lineages. We’ll discuss the relationship of Sanskrit to the Veda, as the sonic structure of the universe, and how it’s traditionally invoked by “those who breathe,” brahmanas. And finally we’ll explore the key concepts at the heart of the Vedas that form the basis of later traditions of yoga.
Module 2: The Vedas and the Mind
The Vedas are said to express the totality of knowledge mirrored within your nervous system. When recited as they were heard by the seers, they have the power to unlock an all-knowing intelligence within your own body-mind. In the second class, we’ll explore the relationship between Sanskrit mantras, the mind and the Vedic definition of intelligence. You’ll learn about the Vedic system of guru-disciple education (adhyāyanam) and the “mind-to-mind” oral transmission of “texts.” You’ll discover the six rules of Vedic chanting and later theories of the subtle body in yoga. And finally, you’ll receive a map of the 14 core Vedic “texts,” which provide a layout of the structure and application of Vedic knowledge.
Module 3: The Vedas and the Body
The Vedas are said to embody an exact replica of the universal body in sound form. When you recite the Vedic mantras, you become one with it. You attain a unified wholeness wherein the macrocosm and the microcosm are identical. Here we’ll investigate the fire sacrifice (yajñā) as the key Vedic method of reconstructing the original body of creation. We’ll relate the prakṛti and vikṛti styles of Vedic chanting to the human/universal pulse. Finally we’ll explore the “limbs” (vedāṅgās), and the “branches” (śakhās) of Vedic knowledge that compose the universal body and how to enliven its connection with the human physiology.
Module 4: The Vedas and the Truth
While the Vedas are said to be eternal, omnipresent and unending, they ultimately lead to Vedānta—the “end” of knowledge. By the “end,” what is meant is the goal. The Vedas lead to the goal of self-realization—“I am that” (tat tvam asi)—the total identification of human and divine. In the final class, we’ll dive into the philosophical content of the Vedas. We’ll explore the pantheon of the Vedic “gods” and “goddesses” and their relationship to the core Vedic concept of “unity in diversity.” We’ll read translations of key Vedic passages like Mantrapushpam, “The Teachings of the Flowers,” that describe the “indweller” in all things. We’ll trace the historical development of Vedic philosophy in the Āraṇyakās, Brāhmaṇas and Upaniṣads and receive the final teachings given to a departing Vedic student in the Taittiriya Upaniṣad that summarize the philosophical and cultural Vedic worldview. 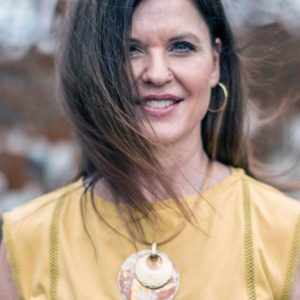 Katy Jane first discovered yoga and meditation after a near-death experience in high school which led her to live with a Brahmin family in Nepal where she was first exposed to Vedic Sanskrit. She then went on to study South Indian Carnatic music at Amherst College and classical yoga with many masters in India and the USA. She earned her M.A. and Ph.D. in Religious Studies (Vedic Sanskrit & classical yoga) from the University of California (Santa Barbara). An American Institute of Indian Studies scholar for Hindi and Bengali, she was awarded a Ford Foundation Fellowship for her masterÕs degree research in West Bengal and Bangladesh on the indigenous and Sanskritic cults of the goddess K__l__. During her two-year tenure in Calcutta, she was sponsored by the Ramakrishna Mission Institute of Culture for Vedic Sanskrit studies and Ved__nta. There she immersed herself in traditional adhy__yanam with her Vedic Sanskrit pan_d_ita and a rigorous daily Vedic study. For her doctoral research on ÒenlightenmentÓ within Vedic, classical yoga and S_r__ Vidy__ traditions (and embodied in place), she was awarded a Fulbright-Hayes Fellowship. After serving as an assistant professor of world religions and Sanskrit at California Polytechnical University, Simpson College, the University of Colorado (Boulder) and Naropa University, she left academia to apply her knowledge of the Vedas, classical Yoga, Sanskrit and __r__ Vidy__ to the yoga community. Katy is the author of Awakening with Sanskrit, Feeling the Shakti of Sanskrit, and Sanskrit for Yogis: An Introduction to N__da, the Yoga of Sacred Sound. Presently, she serves as the director of yoga studies at the Dunagiri Retreat in Uttarakhand, India where she resides with her fianc, teaches online Sanskrit classes and maintains a busy jyotisha (Vedic Astrology) consultancy. Learn more at drkatyjane.com.