The Upaniṣads are the earliest source Vedic texts wherein can be found the roots of all later Hinduism.  It is in these texts that we find notions such as yoga, karma, moksha,  ātman, reincarnation, bhakti, etc., first clearly expressed. All later Hindu schools of yoga trace their origins back to, so they stand as the foundation of all traditional Hindu spirituality. The Upaniṣads are also the main canonical texts for the variegated Vedānta traditions, which base their various understandings of the relationship between Brahman, the Absolute Truth, the ātman, the individual soul or consciousness in all embodied beings, and the world.

This course will engage the most famous and oft-quoted selections from the primary Upaniṣads – reading passages from the longer and more archaic Upaniṣads, such as the Brihadāranyaka and Chāndogya, as well as the entirety of the shorter Upaniṣads, such as the Katha and Iśa.  We will find the earliest seeds of Indian philosophy in these texts, as well as beautiful metaphorically delivered expressions of the spiritual quest.

The course will also consider the opening verses of the Vedānta Sūtra, a text which sets out to systematize the unsystematic material of the Upaniṣads.  Here we will encounter the interpretative lenses of two important Vedånta traditions – that of Advaita (non-dualist) Vedānta of the 8th – 9th-century theologian Śañkara (the lineage from which the great 20th-century Śivānanda stemmed) and that of the vishishtādvaita tradition of the 12th-century theologian Rāmanuja (the lineage from which the renowned Krishnamacarya hailed), which allows a more dualist understanding of the relationship between Brahman and the ātman.  Thus we will trace the influence of these texts on the orientations of these two great masters, Śivānanda and Krishnamacharya, who stand behind much of exported Western yoga. 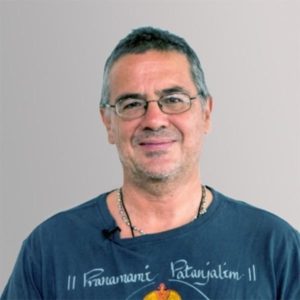