The Yoga Sūtra is perhaps the first treatise on psychology and the human condition in the history of humankind. It is also the most thoroughgoing manual on the intricacies of the various stages of Yoga practice leading to the perfectional levels of Yoga in which one is absorbed fully in a state of union and supreme joy. But its teaching and its vision remain hidden from western readers because of its abstruce code-like aphorisms. Although it was laid down in words well over two thousand years ago, its didactic, pithy aphorisms and eloquently expressed visions are still the most valuable for the serious practitioner of Yoga today.

In this 8-part online course, participants will become thoroughly familiar with all aspects of Patanjali’s Yoga Sūtra in order to develop an ongoing and ever-deepening relationship with this important work for the serious practitioner. The format will involve presentation of materials, shared moments, comments and reactions, questions and responses, while the content of each of the seminars will organically but roughly follow the flow of themes and content as indicated below. 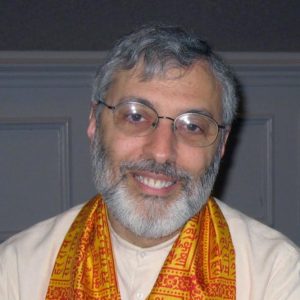 Graham M. Schweig was born in New York City and raised in Washington, DC. He was educated at Johns Hopkins and American University for his undergraduate studies, and at the University of Chicago and Harvard University for his masterÕs and doctoral studies. He earned the Ph.D. in comparative religion from Harvard University. He is a scholar of Comparative Religion who specializes in the religions of India and the philosophy of yoga, mysticism in world religions, and interreligious dialogue and theology. He has also been a dedicated practitioner of meditational and heart-centered yoga under the guidance of traditional teachers for over fifty years, and was granted the highest recognitions by Yoga Alliance (the ERYT-500 and the YACEP status) for his contributions as a teacher of Yoga philosophy and meditation for the past twenty years in yoga teacher trainings. With his co-partner, life partner and wife, Catherine L. Schweig, he formed "The Secret Yoga" (trademarked) approach to teaching and practicing the higher dimensions of Yoga (www.secretyoga.com). Dr. Schweig began teaching as a Teaching Fellow at Harvard, and a lecturer at the University of North Carolina and Duke University. For two years, while in his present position, he was Visiting Associate Professor of Sanskrit at the University of Virginia. Dr. SchweigÕs current position is Professor of Philosophy and Religion at Christopher Newport University in Virginia, where he has been recognized by and received awards from faculty and students as an outstanding teacher and mentor. He is also Distinguished Research and Teaching Fellow at the Mira & Ajay Shingal Center for Dharma Studies at the Graduate Theological Union, Berkeley, where he offers intensive seminars and lectures as well as teaches and guides doctoral students in their research. Dr. Schweig is a widely sought out lecturer, doctoral studies mentor and examiner in the US, Europe, Australia, and India. He is a former Resident Fellow of the Center for the Study of World Religions at Harvard University, and a Visiting Fellow at OxfordÕs Centre for Hindu Studies. Dr. Schweig is a translator of sacred Sanskrit texts and a textual scholar who has contributed over 100 publications of articles, reviews, and chapters of books including several books, and over the years has presented dozens of papers and lectures at professional conferences and universities. Among his several books, he is author-translator of Bhagavad G_t_: The Beloved Lord's Secret Love Song, published by Harper Collins in 2007, which continues to be used in the university classroom as well as widely used in yoga teacher trainings around the country and in Europe. Dr. SchweigÕs first book, Dance of Divine Love: India's Classic Sacred Love Story, was published by Princeton University Press (soon to come out in an Oxford softcover), a work that focuses on the devotional yoga and mysticism of Hindu traditions. Additionally, Dr. SchweigÕs translation of and commentary on Patanjali's Yoga Sutra is a forthcoming book to be published by Yale University Press. Dr. SchweigÕs research has taken him to India many times, including the directing of a one-year research project funded by the Smithsonian Institution, for which he has also offered well over three dozen invited lectures and seminars at the Smithsonian Institution in Washington, DC over the past fourteen years.