Haṭha yoga texts, such as the Haṭhapradīpikā, often talk about gaining control over or  conquering death. One of the best means recommended for doing this is to control the breath through prāṇāyāma practice, since prāṇa is also the life force. The main words for death derive from the verb mṛ, to die, which gives mṛta and mṛtyu. This is the opposite of amṛta, literally not  dead, or immortal. It is also suggested that other methods, such as viparīta-karaṇī, an upside-down mudrā akin to shoulderstand or headstand can help to prolong life by stopping the loss of bindu or amṛta, the life force or nectar of immortality. One of the other main words for death is kāla, also meaning “time,” so conquering death is beating time as well. Doing this is often linked to the  ultimate goal of attaining oneness with brahman. While these texts give it a more practical spin,  the idea of being free from death to reach this aim has its roots in much older texts like the Katha Upaniṣad, where the main character actually talks to Death, questioning him about how to become free of it, and ultimately doing this through yoga and Self-knowledge. 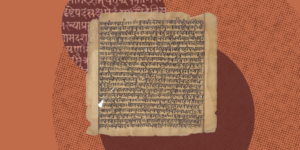