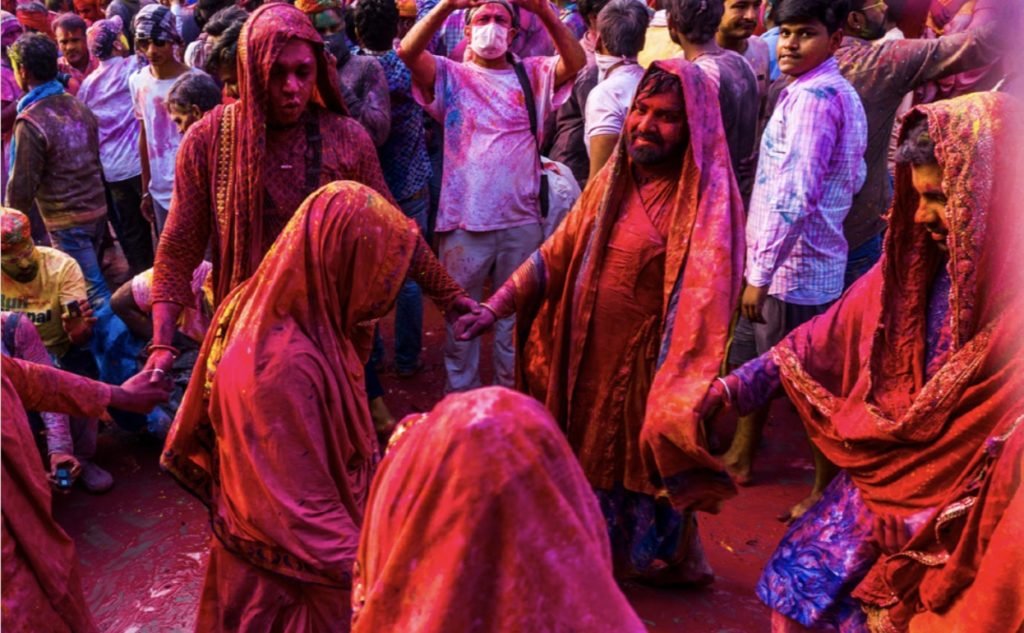 I’d already finished a full cupful of chilled tandai—and was heading for a second—when my brother-in-law approached me with words of caution. “Don’t drink the green stuff,” he advised. “It’s laced.”

Unknowing of what most things are in India, I’d grabbed the green cup. I was thirsty because I’d been dancing all morning with a pack of women I didn’t know in a local park. It was the annual Holi festival and things had already gotten wild. They were about to get even wilder as the “green” started to take its effect.

Famed the “festival of colors,” Holi occurs on the brilliant full Moon in the Vedic “month of flowers.” It’s signaled by bonfires burning up collective animosity in the streets. In our English idiom, we “bury the hatchet.” On Holi, these North Indians burn it up in every neighborhood.

Enemies become friends. Servants and their employers embrace. Children dump buckets of colored water on their elders’ heads. No one minds. It’s great fun to be pummeled with water balloons by three friends on a motorcycle wearing rainbow wigs—or to stalk the neighborhood armed with a water gun hunting for similar prey of your own.

The cause for celebration is the stuff of myth and legend.

Hiranyakashipu’s son, Prahlad was born to defeat him, setting his devotion on Narasiṁha (the half-man, half-lion avatāra of Vishnu) to accomplish his fate. To defeat a demon who lies in the cracks requires a similar foe. Narasiṁha embodies the power of the liminal (the “betwix and between”) as a “third option” to the opposition of right and wrong.

As Prahlad planned to defeat his father, his aunt, Holika, lured him to sit in a burning fire with her. She tricked him into believing that she would offer protection. Instead, she wore a magic cloak that prevented fire from burning her, but left Prahlad vulnerable to the flames.

Prahlad trusted. He didn’t react. Instead, he prayed. As a devotee of Narasiṁha he knew a solution would arise that would produce a surprise outcome.

Just as he was to be burnt alive a miracle happened. A gust of wind suddenly appeared and blew the cloak off Holika and onto Prahlad, burning his evil aunt to ash. As she was incinerating, she begged her nephew’s forgiveness, an emotion in-between love and hate.

Since then, every year on this same full Moon in the month of flowers, people burn up all their old enmities. They forgive all the injustices that have been done to them. They spread the colors of love everywhere. And they shout, “Holi hai! It’s Holi!” in honor of the demoness who was healed by the third option.

As for me, I was really starting to feel the “green” as the drumbeats became more pronounced. The music started to lead those of us on the dance floor to greater heights of group ecstasy. I thought to myself, “This couldn’t get any more fun!”

Two dancers made their way through the crowd, costumed as the lovers Radha and Krishna. I was instantly mesmerized by their expert dance moves, exquisite costumes and heavily made-up faces. I couldn’t tell whether they were men or women. I couldn’t tell if they were human or divine. I’d never seen anything so beautiful as their dance with their theatrically expert facial expressions and perfect hand gestures.

I leaned over to a new friend (who’d just dumped a fistful of pink powder on my head) and shouted over the music, “Who are they?” Delightedly she shouted back, “Kinnar!”

The Sanskrit word, kinnāra, is itself the same question I’d asked: kiṁ nāra, “Is that a man?” The operative word in the query is “that,” referring to someone “in-between,” neither man nor woman, god nor animal. She was referring to India’s community of transgender people commonly (and derogatorily) known as hijra.

The hijra prefer to be kinnar, elusive in-between beings, who present us with a third possibility to defeat the demon whose evil lies in the cracks.

Kinnāras are mentioned in the Vedas in the same class of asexual beings as gandhārvas (celestial musicians) and yakṣasās (fairies). Noteworthy among them are such divine poets as Narada.

Of all the Vedic gandhārva-ṛṣis, the one who literally “pulls on the heart’s strings” is Narada—the inventor of music, the inspirer of poets, the healer of the broken-hearted. His name means a “gift” (da) to “humanity (nāra). He’s a messenger bearing a remedy to what impedes love—the struggle for right and wrong.

Narada is first mentioned in the Sāma Veda as an udgātṛ priest—or one who chants the sweet melodies underlying creation. In the Vedic performance of yajña, it’s the udgātṛ who invokes the heart—the feeling intelligence within nature. He inserts the vibration of love in what would otherwise be a staccato performance of mantric formula.

Later in the Purānic period, Narada acts as an intermediary between divine and human—a gandhārva among us who understands exactly why we suffer grief and yet bears a message of another way. While love lost may be the problem, it’s also the solution. Narada’s way leads us from our attachment to profane love (aparabhakti) to eternal, sacred love (parabhakti).

The kinnāras also make an appearance in the Rāmāyaṇa during Rama’s exile when the citizens of Ayodhya refuse to let him go. They follow him into the forest. Finally, he pleads for every man and woman to return home and they dejectedly obey. Only the kinnāras stayed behind. When Rama expresses surprise, they remind him that they are neither man nor woman and therefore can protect him during the exile.

Rama was so touched by their pure devotion, he gave them a boon. Whenever there is a wedding or child born in any home, the kinnāras will carry his blessing. To this day they are invited to such auspicious events to offer badhai, their sublime music and dance. (Even my new friend at the Holi celebration waited in line to be photographed with the kinnar who’d graced the function!)

The Value of the Liminal

Numerologically, the Vedas can be expressed as number three (plus a “fourth”). In Vedic chanting, there are three tones: udatta (medium), anudatta (low) and svarīta (high)—the third.

The three tones refer to earth, the underworld, and heaven. Heaven is not of this world, yet is the bridge to the non-changing Being that in Sanskrit is described as turīya, the transcendent. The third is the intermediary, the liminal state.

To maintain and reinforce the divine-social order, the Vedic civilization placed value on the liminal, the third possibility. It’s the “field between right and wrong,” that the poet Rumi would like to meet you at.

The sociologist Victor Turner emphasized the value of a state “betwix and between” to restore social health and well-being. Festivals like Holi are collective “rites of passage,” in which society sheds the old and embraces the new—by recognizing the value of the third, the time in-between. By reversing all the ordinary social rules, a cosmic order is maintained that embraces duality and its transcendence.

Similarly, the kinnars are shape-shifters whose liminal value has been extolled in Purānic tales like “The Churning of the Ocean of Milk.” While the demons and gods stood on opposite sides to acquire the precious amṛta (nectar of immortality), Vishnu transforms into Mohini, a voluptuous seductress who lures the demons away from the elixir that she distributes to the gods.

On liminal holidays like Holi, kinnars are like Mohini. Their sublime beauty lures us away from our ordinary obsessions, bearing the amṛta—forgiveness—to restore social order and open heaven to earth.

If you’ve ever been to India, inevitably you’ve encountered heavily made-up and sari-clad hijra on train platforms and intersections soliciting money. If you refuse to give, they refuse to get out of your face. Some people believe they can curse you. For that reason, I don’t take chances. I give.

In the world outside Holi (and other liminal times like births and weddings) it’s a tough living for these ladies. While according to their tradition, the hijra live together in organized communities led by a guru where they renounce sexuality altogether, they’re more often forced into sex work to sustain themselves.

Rajesh Talwar in The Third Sex and Human Rights outlines the contemporary struggles of the hijra community. Using their disruptive presence, they earn a living begging in confrontational ways and sex work. Of all the marginal communities in India, the hijra are most likely to face brutal violence, exploitation, and poverty.

Like most things in India, this isn’t new. The Kāma Sūtra describes kings who’d captured kinnāras (often believed to be birds), imprisoned them in cages and forced them into exotic sex acts. They are present in every chapter of Indian history, caught between reverence and repulsion.

Finally in April 2014, the Indian Supreme Court officially and legally declared the hijra as a “third gender.” In his ruling justice KS Radhakrishnan recognized that “seldom does our society realize or cares to realize the trauma, agony and pain which the members of the transgender community undergo.” It’s a mindset, he declared, “[that] needs to go.”

Perhaps no other group can achieve a new social order beyond ideas “of right-doing and wrong-doing” than the kinnars. Their dance