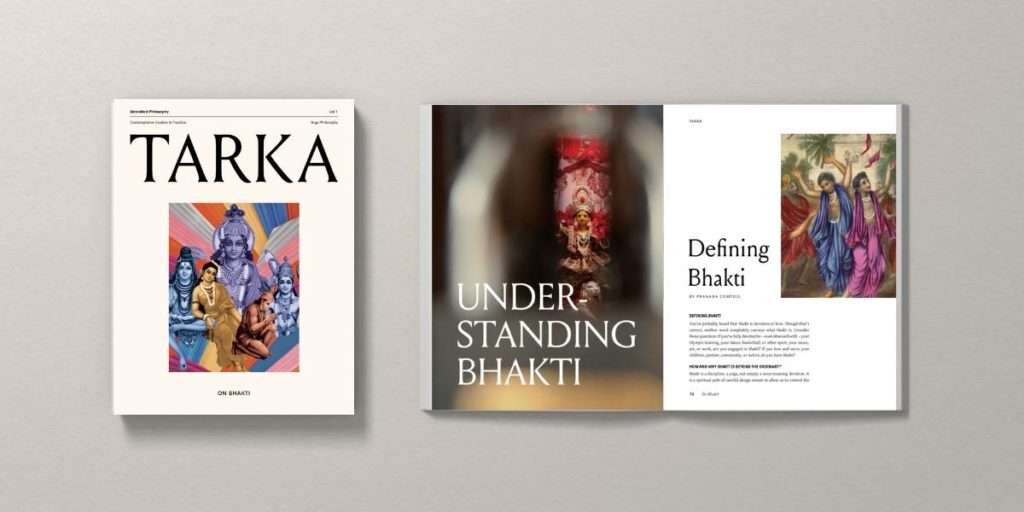 Bhakti is love or devotion to a supreme deity. It is a form of religious practice, a state of mind, and the goal of practice. Through visualization, narrative, chanting, and pūjā, bhakti taps into raw emotion and desire. It engages with images of the god Kṛṣṇa, for example, as an infant to be nurtured and adored, as a handsome young lover, and as a loyal friend and teacher. Thus, the image of god connects to the deeply personal, rooted in a heartfelt connection. Yet, bhakti is more than devout human action; it is a discipline directed at cultivating a pure and absolute love for the supreme, both as a personal form of god and as that essence that surpasses the imagination.

Tarka, as explained by Kavitha Chinnaiyan in this issue, is a means of reasoning derived from logic, inference, and devotion. Each element of tarka is essential to the greater process of understanding and elevating consciousness. As such, bhakti is vital to tarka; the heart and intellect mutually inform each other. Study is enhanced by adding a physical practice of contemplation and vice-versa. The TARKA journal, thus, aims to serve and support the scholar-practitioner by valuing and dis- cussing aspects of practice alongside philosophical and scholarly topics. Modern spirituality is often at odds with traditional religious prac- tices that are centered around devotion. Recent studies1 show that one out of every four people in the United States identifies as “spiritual but not religious,” many of whom religiously practice yoga and meditation.

For many, these practices are more than habits of self-care; they become a kind of centrifuge, a ritual of sorts that holds the many moving parts of life together in greater harmony. A ritual becomes distinct from a habit, in part, by setting an intention. Still, the rejection of dogma and authoritarian notions of god also risks leaving out the practice and concept of devotion altogether.

Bhakti in the Hindu, Buddhist, and Jain traditions is distinct from dogmatics, because it emphasizes cosmic love. And while ritual is a central aspect of practice, the core element in bhakti is the heart. Amplifying and drawing upon everyday experiences of devotion to family, friends, work, art, and nature, the practice of bhakti aims to transform the mundane into the divine. This is a transformation of one’s perception and also of the individual’s desires and actions in the world.

An interesting point of tension that often comes up in the study of modern yoga is the dichotomy between the goals that are stated in texts like the Yoga Sūtras, which emphasize detachment and withdrawal, and the goals of modern postural yoga, which are commonly directed towards health, connection, and well-being. Differing from both of these ideals, and in opposition to much of our daily goal-oriented habits, the goal for the bhakti tradition is the path itself. This affirmation of the quotidian, the seemingly small and insignificant moments of life, is a timely call towards self-examination and appreciation for what is.

The careful reader will notice that authors have used various spellings for certain key terms and names. In particular, “Kṛṣṇa” also appears as “Krishna” or “Śri” also appears as “Shri.” For both, the former is a traditional Sanskrit spelling, while the latter is a commonly accepted phonetic spelling of the same name/word. Since this journal is attempting to bridge the scholar with the practitioner, we are opting to let the individual authors make a final choice. Some elect for a more academic or traditional style, while others are more concerned with writing for a wider, more popular audience. In fact, I expect that all of our articles are doing both of these things and therefore the diversity in the spelling of Kṛṣṇa/Krishna’s name is a relevant nuance.

In this issue of the TARKA journal, On Bhakti, we explore the concept of devotion, especially from a Vaiṣṇava Hindu perspective, including an in depth look at the teachings of the poet-saint Śri Caitanya, the Tamil Āḻvārs, the yogas of the Bhagavad Gītā, Kṛṣṇa devotion, and the Nārada Bhakti Sūtras. Bhakti is a central element within many of the traditions that stem from the Indian subcontinent. This issue of Tarka highlights the Vaiṣṇava tradition, in part because of its overt and systematic emphasis on bhakti and, in part, because in looking at a single tradition with more detail, we hope to attain a more authentic and comprehensive facet of the whole. A selection of shorter articles presents fundamental terms that relate to bhakti. The articles on relating to a deity, pilgrimage, Sanskrit study, and kirtan all explore elements of practice. In this issue, the scholarly and the philosophical are set alongside practical instruction and reflections anchored in practice. Devotion may appear to be at odds with the move in modern yoga towards secularism and the focus on health and well-being, yet a greater level of satisfaction and insight in modern life may be possible through an embrace of bhakti.