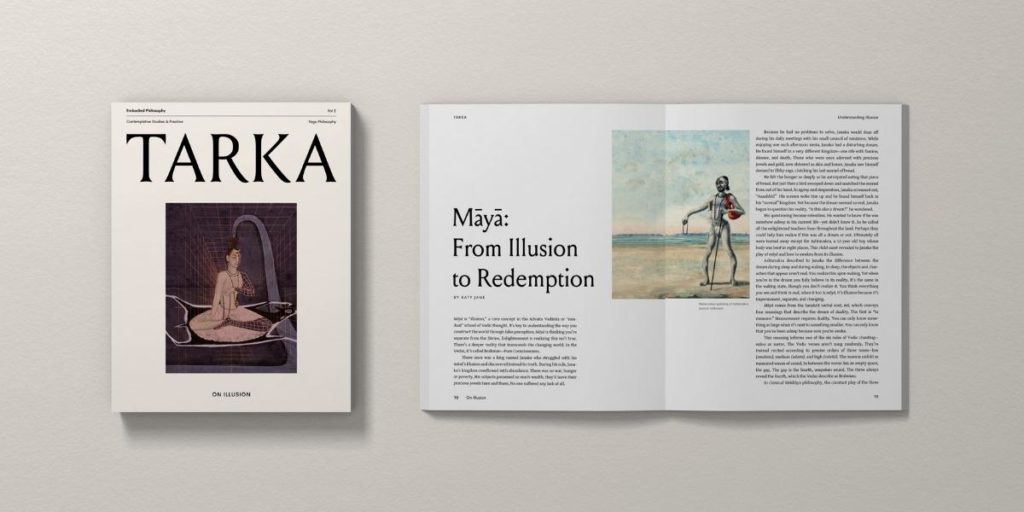 The idea that “the world is an illusion” and that reality might not actually be as it appears may seem counterintuitive, a topic more at home in fantasy literature and science fiction than in therapy and philosophy. Yet almost every religion addresses illusion, to some degree, and highlights the imagination as an effective tool to engage with it. This suggests that perhaps there is more to truth than what is encountered through objective reasoning. Fantasy, fairy tales, myth, science fiction, sacred geometry, iconography and abstract, impressionistic art all work to communicate truths that run deeper than mere objective, surface analysis. But if imagination binds as frequently as it transforms, how are we to know which forms of illusion are true?

In our daily encounters with other beings, we are continually reminded that though we share certain experiences, we each interpret

them differently. This idea is aptly illustrated in the ancient parable from India of the six men who had never before seen an elephant. Each man is blindfolded and led to one part of the elephant. Thus, one man places his hands on the trunk, another on a massive foot of the elephant, another touches his ear, and so forth. Naturally, each man comes away with a different impression of what “elephant,” is. Most of us engage with “reality” on a partial level, even as we may strive to see its fullness. We are each blinded by our implicit biases that are formed through race, religion, class, cultural context, and a variety of other factors. Additionally, algorithms based on our past choices control the type of news and adver- tisements we receive, thereby solidifying and furthering a particular individual identity and worldview. With consumer driven technolog- ical advances, we risk falling ever deeper into a rabbit hole of our own conscious and uncon- scious design. “Elephant” is then reduced to a trunk or a foot and we are never graced with the beauty of the elephant’s gentle eyes.

At the same time, the virtual online world is radically expanding our knowledge of others. We are familiar with and deeply care about places we have never been and can culti- vate meaningful relationships with people we have never met. Indeed, as Kenneth Rose states in his article for this issue, “The Reality of Illusion,” “Everyday life is rapidly going virtual.” This is all the more significant during this Spring of 2020 and the Covid 19 pandemic. If there is one thing that social distancing due to Covid 19 has demonstrated, it is that we can remain connected even when we are not in the physical presence of other people. The smile through the computer camera is not the same as a hug or a shared meal, but the virtual connection eases the sense of isolation. My ten year old son, for example, is not allowed to play with his friends, so in lieu of kicking a soccer ball or jumping on a trampoline, he “meets” with his peers online in a world of virtual gaming – a privilege he was never allowed before the pandemic. He sinks into a computer-generated realm where he imagines himself with superhuman muscles, a cat face, and an ability to jump walls.

I’ve long been wary of allowing kids too much tech. It’s proven to shorten their atten- tion spans and limit their interpersonal skills.1 Yet I now witness a child rejoicing in ever deepening friendships with his cousins and friends who live hundreds of miles away from us – because they play, talk, and laugh together

in a virtual world. During quarantine, it feels like a lifeline for a highly social child, but what might be the long term consequences in a generation of kids who associate friendship and normalcy with virtual connectivity? One thing is clear: technology is a double edged sword, cutting through myopic viewpoints and isolation, yet at the same time fundamen- tally changing our mental composition.

With a virtual reality flight simulation, I can experience a bird’s eye view of San Fran- cisco. Heart racing, I soar in between buildings and flinch as I nearly collide with a skyscraper. These kinds of VR-mediated experiences might be the only way to experience life as a bird. Similarly, researchers are exploring how virtual reality experiences can assist the ther- apeutic process by facilitating types of self-en- counters that would not be possible other- wise. In the “Virtual Freud” experiment, for example, the patient narrates his challenges to a virtualized Sigmund Freud, and then is virtually transplanted into Freud, becoming the psychologist himself. From this position, he watches a virtual projection of himself and listens to his previous narrative. This shift of subjective position facilitates a unique affective resonance that would not otherwise be possible. The hypothesis informing this research is that such a newfound perspective could be psychologically beneficial. This and other VR research programs suggest that it is not illusion per se that is the source of bondage, but it is rather how illusion is constructed, framed, and directed that makes all the differ- ence.

The concept of illusion plays an important role in the Buddhist teaching that saṃsāra (the cyclical nature of death and rebirth) is nirvāna (liberation or freedom from saṃsāra).

Saṃsāra is nirvāna when the individual attains a deep insight, sees reality clearly and no longer relates to the world through a process of grasping/clinging that creates dukkha, or suffering. In Hinduism, Advaita Vedānta is famous for its philosophical debates and exploration into the topic of māyā, sometimes translated as illusion or ignorance. Jeffrey D. Long offers a nuanced approach in his article, “The Many Faces of Māyā,” showing that māyā is cognate with the English word magic and indicates the playful nature of the divine, among other things. Not unrelatedly, the use of visual tools like yantras in the Tantrik traditions mediates a connection between the microcosm and the macrocosm. In all of this, the fundamental effort of practice is directed towards seeing the world clearly, without the obfuscating mental filters of ignorance, fear, and desire.

In this issue of Tarka, we engage with the intersection of the modern, virtual world and the legacy of philosophy and contemplative practice that values imagination, dream states, and the significance of illusion. The soteri- ological basis for almost all contemplative practice is grounded in the idea that reality is not exactly as it appears. Illusion in this sense is not a temporary play on the senses – like walking across hot sand and seeing a distant pool of water that is actually just a mirage made from heat waves. Rather, it is the idea that our everyday waking reality is more like the mirage than our senses are gener- ally willing to let on. Contemplation, in this sense, involves engaging with and accepting the parts of life that are often ignored. What Carl Jung coined “the shadow” is that part of the self that operates on a subconscious level, often unacknowledged, yet yielding

a powerful influence upon the individual, their habits, preferences, and health. This concept of the subconscious, shadow, and the knowledge that comes from the dreamstate is central to shamanic practices, yoga (especially within the Yogavāsiṣṭha), and Buddhism and is featured in the articles by Katy Jane, Christo- pher Key Chapple, Andrew Holecek, Matthieu Ricard, and Isa Gucciardi in this issue.

In each case, it is through delving into the illusive, subconscious or dream state that the individual attains insight and the potential for healing and/or liberation. This analysis of the importance of dreams and illusion in the contemplative traditions demonstrates the value and potential for modern technological advances that similarly play on the imagina- tion and subtle sensory awareness. Contrary to images made popular through films like The Matrix, we are not at the mercy of technology, suffering the disenchantment of waking up in an evil simulation. Instead, the various authors in this issue of Tarka explore the value of illusion and the possibility that new devel- opments in technology can be aligned with the practices and insights of those contemplative traditions that have been inspiring the imagi- nation for thousands of years.