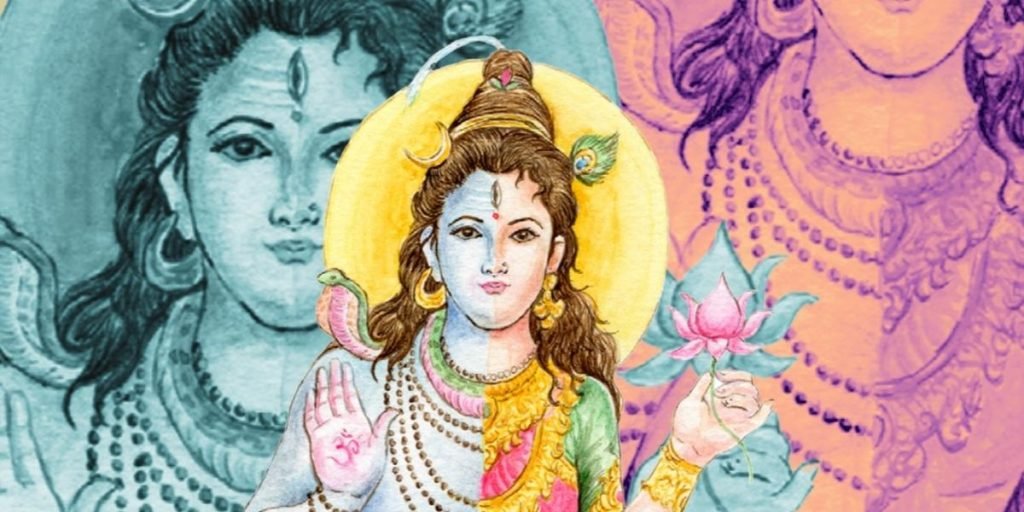 Ardhanārīśvara is a hybridized deity form of Śiva and Śakti and is thus popularly depicted as half-male and half-female. A compound of ardha (अर्ध), meaning “half,” nārī (नारी), meaning “woman,” and īśvara(ईश्वर), meaning “lord,” the name literally means “Lord who is half woman.” Ardhanārīśvara is thus a profound and empowering symbol of the “non-binary” and philosophically represents the non-duality and non-separableness of Śiva (Consciousness) and Śakti (Energy).

There are several references to Ardhanārīśvara in the purāṇas, a genre of Indian literature that details the myths, stories, and legends of the Hindu pantheon. In one tale of the Śiva Purāṇa, the god of creation, Brahmā, creates all beings, who unfortunately all turn out to be male. He instructs them to regenerate and reproduce themselves, but they are – unsurprisingly – unable to do so. Śiva, therefore, appears in an androgynous form, which highlights Brahmā’s error and makes him realize why his creation is not yet reproductive. Brahmā thus engages in intense tapas, and Śiva, pleased by Brahmā’s devotion, separates Śakti from himself so that Brahmā may appeal to her directly. With praise and devotion, he entreats her for the power to create the female sex; Śakti finally agrees, and creation through copulation is born.

For an issue on queer dharma, a tale about the origins of reproduction might strike us as a strange one to include, given the fact that many queer people are unable to participate (and are oftentimes uninterested) in biological reproduction. But queering this myth from the Śiva Purāṇa can offer some fruitful fodder for exploring the role of divine creativity in queer experience. After all, if Ardhanārīśvara symbolically depicts the co-incidence and simultaneity of binary sexual energies within the very body of deity, then those queer bodies that transcend the social construction of gender are given a powerful symbol for non-binary experience.

In the aforementioned tale, the creator god, Brahmā, is incapable of fulfilling his creative role with only male energy populating the cosmos. It is only through his recognition of duality-in-unity, the non-dual Ardhanārīśvara, that he discovers the missing piece of the puzzle. Aside from the relatively banal observation that biological women are necessary for reproduction, this story illustrates an obstacle to divine creativity in the privileging of one gendered category. The effulgent upsurge of creativity that characterizes much spiritual insight is blocked by the normalizing of masculine gender to the exclusion of the “other.” It is only by discovering the non-binary within oneself that we discover how that contracted mode of identification that is a self-enclosed “gender” contributes to a limited view of reality itself. Ardhanārīśvara represents an embodiment in which no gender is excluded and therefore in which all such expression is permitted and divinely celebrated.

When I was in my early twenties and just beginning to explore my queer identity, I stumbled upon an image of Ardhanārīśvara on a greeting card in a Seattle bookstore. With no context at that point to understand the iconographic and philosophical origins of this image, I was nonetheless immediately drawn to it for what I took to be an empowering depiction of androgyny and queerness. Years before I began deeply studying Hinduism and Indian philosophy, this greeting card image was the first representation of the divine that made sense to me following my childhood in the Christian church. Ardhanārīśvara mirrored my own experience as a queer person, who grew up being castigated and bullied for “screaming like a girl” and behaving in ways that were considered taboo by the fundamentalist gender binary that was still pervasive in the 80s and 90s.

Needless to say, I bought that greeting card, and well before I had an altar on which I could place my sacred symbols, this mūrti of Ardhanārīśvara was prominently displayed in my apartment. I would gaze at it again and again, subtly prostrating to the wisdom I knew to be emanating from it, surrendering to a mysterious sign that beckoned forth and highlighted the spiritual significance of my experience as a gay man and a queer person. In a culture utterly bereft of divine queer symbols, this living relationship with a meaningful symbol offered my first taste of the significance of queer spiritual iconography. It pointed to my thirst for spiritual images that include, represent, and embrace the divine character of my lived experience. Many years later, I added a brass mūrti of Ardhanārīśvara to my altar, where it continues to inspire and refine my exploration of how queerness and spiritual practice intersect in my life.

Ardhanārīśvara is a potentially empowering symbol of queer liberation for spiritual seekers, as it, in a profound sense, reveals that if god is “them-self” non-binary (or trans-binary), then here is an approach to god that includes us – indeed that illustrates the divine character of queer experience. For many cultures where god is monopolized as a markedly male, cisgender deity, Ardhanārīśvara is a radical subversion of the theological status quo. It is thus an important symbol for a constructive queer theology, a theology in which god is, in a significant sense, queer – insofar as god is the source of all binaries and is therefore non-binary in its very nature.