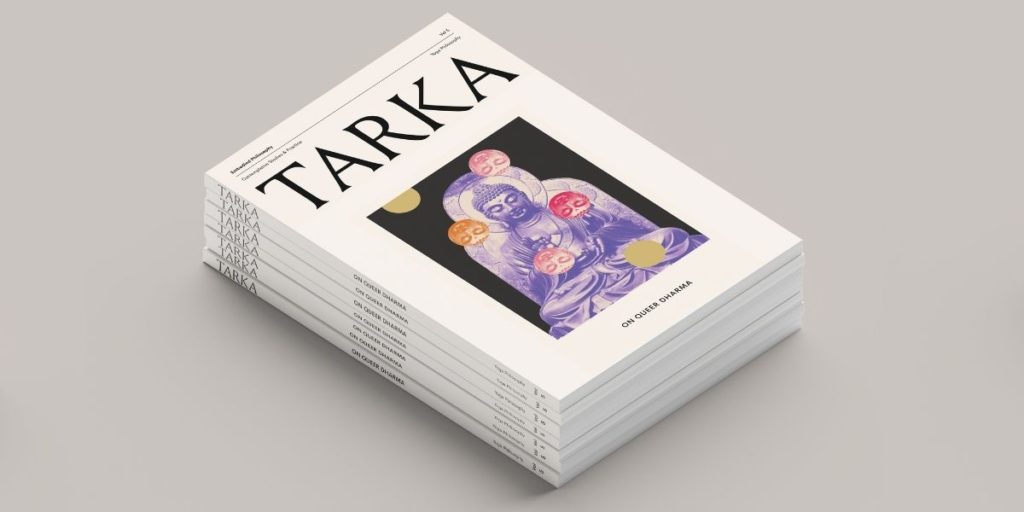 Embodied Philosophy, as an organization that was founded and is primarily run by individuals who variably identify as members of the LGBTQ+ community, might be considered an experiment in “Queer Dharma.” Queer thinking, practice, art, and devotion has always been a part of the dharmic paths, even while queer individuals have often been marginalized. Today, queer spiritual leaders and their allies have been forging new intersections of ancient teachings with contemporary theories and in turn paving the way for more inclusive spiritual communities.

Religious belonging and queer identity are uneasy bedfellows. What does it mean to have a “queer dharma”? The two terms each signify aspects of identity, belonging, or of not belonging. To be queer, historically, is to be different, even strange. The use of the term was more often pejorative, and, in embracing the term – and in celebrating that difference – the term queer has evolved. It denotes a sense of belonging, alongside others who were historically made to be outsiders. It also presents a necessary and welcome challenge for all binary thinking. A number of short articles within this issue directly define the term “queer” and “queer theory” including work by Jesse Jagtiani, Jacob Kyle, and Marie Cartier. Adam Zmith provides a more visionary, personal narrative with his article “Queer Utopia,” and, in our Practice section, Rae Johnson proposes a method for “Queering/Querying the Body,” that challenges normative assumptions about diverse bodies from a lived, somatic approach. Jeff Hood alternatively looks at Christian concepts of God in a provocative piece titled, “Queer God and a Stiff Peter.” Naming a path “queer dharma implies a kind of agency, confidence, even pride. Yet, as the narratives within this issue reveal, it is a constructive and tenuous path–potent, troubled, and rich with history.

“Queer Dharma” is, in a sense, not new because dharma extends to all of creation, and queer people have always existed. Several articles feature ways that queerness and gender fluidity have appeared in traditional contexts, like the articles on Ardhanārīśvara (a version of Śiva who is half male, half female) by Jacob Kyle and Zoe Slatoff, the article on Harijans (India’s community of transgender people) by Katy Jane, the article “Embracing the Trans Bodhisattva, Kuan Yin,” by Cathryn Bailey, and the visual essay on the annual transgender festival that takes place in Koovagam, India by Jess Kohl. In “The Perils of Becoming a Gopi,” Phil Hine examines the history of the cowherd girl/man who blissfully dances with Krishna in an act of rebellious devotion and the limits that exist for the transgender or cross-dressing men who reinact this role. Iconography and representation, especially in religious contexts, can carry a tremendous impact, even instilling hope and a sense of home despite the heteronormative confines of much of religious doctrine and monastic communities. Examples of this can be found in the articles by Christopher Rzigalinski, Ryan LeMere, and Chris Walling. Each relay aspects of the spiritual, queer journey and the various ways that their individual searches have aligned with contemplative practice and the dharmic traditions.

While a number of the articles already mentioned take up aspects of the dharmic traditions in detail, the broader meaning of the term dharma merits some further consideration here. Dharma is an intercultural concept that connects the various traditions of India and South Asia, including Hinduism, Buddhism, Jainism, and Sikhism. Increasingly, it is also a term embraced by those who regularly practice meditation and/or yoga and who have come to explore the narrative and philosophical underpinnings of these practice traditions. In using the phrase “Queer Dharma,” this issue points to both the history of queer people within dharmic traditions and to the contemporary intersection between queer identity/theory and contemplative traditions.

In Buddhism, dharma, or dhamma, points to “reliable teachings.” It is the fundamental precepts within Buddhism including the Four Noble Truths and the Eightfold Path. In the Sikh tradition the term expresses a path and an ideal. Jagbir Jhutti-Johal explains, “According to Sikh teachings, the term dharam refers to spiritual wisdom, righteous living, and responsibility towards God and creation. It is a term that expresses the sense of “duty” and “way of life” that a Sikh aspires towards.” For Jains, dharma is most often aligned with ahimsa, or a commitment to a life path of non-violence. The Ācārāṅga Sūtra, one of the oldest and most authoritative texts within the Jain tradition states:

All things breathing, all things existing, all things living, all beings whatever, should not be slain or treated with violence, or insulted, or tortured, or driven away. This is the pure, unchanging, eternal law [dharma], which the wise ones who know the world have proclaimed.

In Hinduism, dharma has often been translated as “sacred duty.” Svadharma is then one’s individual duty or path. Yet the dharma (in Hinduism) is far from the straight and narrow. It is, as the great Hindu epic Mahābhārata emphatically demonstrates, subtle, complex, circumstantial, and interconnected. The war between the Pandavas and the Kauravas sets central edicts such as ahimsa, or non-violence, alongside ethics of loyalty, honor, karma, and saṃsāra – the great cycle of birth, death, and re-birth. The juncture of this moral dilemma is the content of the Bhagavad Gītā – to surrender in passivity or to fight?Closer to our current era, Mahatma Gandhi famously embraced the Bhagavad Gītā as a text to support his tireless, nonviolent protests. For Gandhi, dharma, the sacred path, was ultimately non-violent and active. Yet the end of the Gītā (and the beginning of the rest of the Mahābhārata) unfolds as Arjuna resumes the bloody battle.

In a short story titled “The Five Women,” the poet and prose writer Mahasweta Devi gives voice to the subaltern widows of the countless foot soldiers who would have fought and died on the battlefield of Kurukshetra. Reacting to a reference to the war as a “disaster,” one woman retorts,

Disaster? What disaster? Was this some natural calamity? So many great kings join in a war between brothers. Some choose one side, some cross over to the other. It wasn’t just brother slaughtering brother. We know of quarrels – jealousies – rivalries too. But such a war for just a throne? This, a holy war?! A righteous war?! Just call it a war of greed!

Devi brings her readers to the periphery of the famous epic, expanding the sphere of concern beyond the royal lead-actors and into the grief and practical realities of the unnamed who form the greater context and background of the narrative. What happens when we reexamine foundational texts? Do heroes fall? Or might we come nearer to a wider, more encompassing truth that has lived within the text all along?

In this way, sanātana (eternal) dharma, is at once ancient and ever-evolving. Dharma arrives in the present moment with the fullness of the past. Those who engage the dharmic traditions with integrity must attend to history with a measure of zeal, curiosity, and compassion.

These are texts and traditions forged from bygone eras that continue to ring truth into our present moment – yet, the present moment also offers newly revealed truths and the possibility of liberation in ways previously unimagined. Here enters the constructive project of the queer dharma.

The work of a constructive theologian is different from that of a scholar of religious traditions. It means the scholar locates themselves within a tradition, that they engage with the classical tenants of that faith and practice, and that they participate in the ongoing development of the tradition by showing up with their doubts, struggles, and convictions. It is the personal and political reality of the present moment brought into conversation with the past. The community of the faithful, the sangha, or the members of a particular lineage, ultimately determine how their truth is understood and taught to the next generation. The world over has seen a gradual transformation of the role that queer people play within prominent religious traditions. The work there is far from complete, but the fact that queer leaders openly work as pastors in certain Christian communities, or as rabbis in the Jewish tradition, for example, demonstrates the fruit of constructive theological work. In this way, initiating change within a religious or spiritual tradition is an act of faith and commitment to the greater potential of that community.

Queer dharma acknowledges the violence and bigotry that LGBTQ+ people have suffered and continue to suffer. Alongside that trauma, it locates a spiritual and religious path of hope, healing, humor, and transformation. Offering a touch of playfulness that is able to rise above trauma and petty scorn, the acceptance of queer identities, queer spiritualities, and queer love may, in fact, be a path of reform and redemption that is relevent for all.