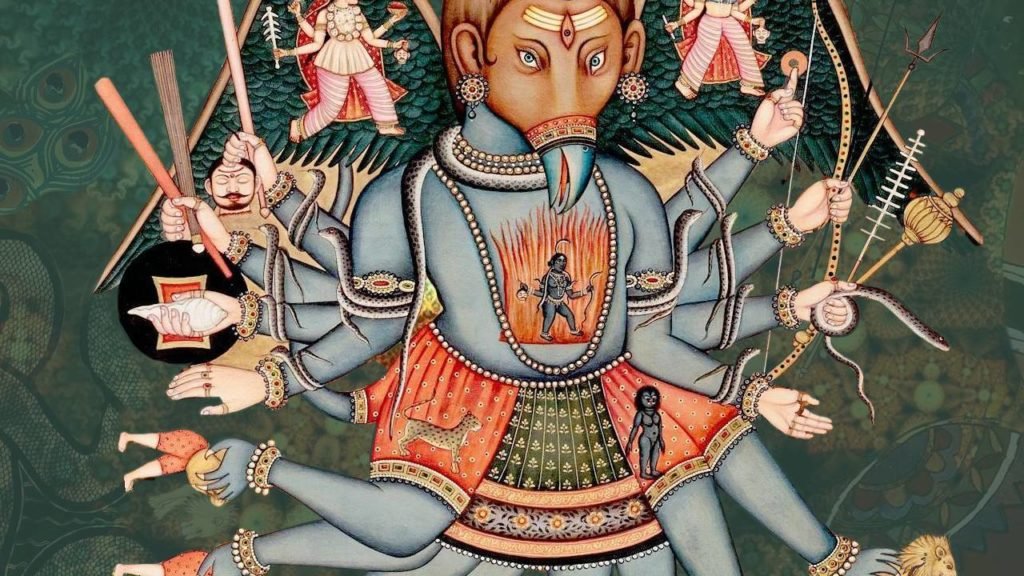 Death plays a pivotal role in the history of yoga—the original objective of practice was ending rebirth. At some point between the earliest Vedas and the time of the Buddha a thousand years later, the doctrine of karma changed people’s priorities. Whatever one did produced karmic results, leaving mental impressions that led to more actions. Since this cycle spanned lifetimes, one was destined to suffer through an infinite process of reincarnation. The ultimate goal was to set oneself free, using spiritual wisdom to sever the chain of karmic consequences.

Yoga developed as one such approach. Practitioners traded ideas, from ascetic extremes of self-mortification to subtler techniques based on meditative insight. Most of these methods yielded shifts in perception. If one ceased to identify oneself as an individual person—and instead saw the self as unfiltered consciousness—one might be liberated. Texts describe this outcome in various ways, but they usually involve transcending time and space.

One popular metaphor for reaching that state is immortality, for which the Sanskrit is amṛta, or “not dead.”1 The Buddha used a similar term, calling liberation “deathless” (in Pāli Mamata).2 More recently, Yogananda’s Autobiography of a Yogi makes frequent reference to a “deathless guru.” Meanwhile, an influential text about physical practice—the fifteenth-century Haṭhapradīpikā (4.107)—spins the same message differently: “The yogi who is completely released from all states and free of all thoughts remains as if dead. He is liberated.”3 Lest there be any doubt about what this means, it adds that he is “healthy, apparently sleeping while in the waking state, without inhalation and exhalation” (Haṭhapradīpikā 4.112).4

The following extracts from my book, The Truth of Yoga, present other examples.5 They range from the earliest Upaniṣads—which talk about the unity of ātman and Brahman, the innermost self and the whole of the cosmos—to Patañjali’s later Yoga Sūtra, which seeks to separate spirit from matter. Whatever the framework behind liberation, it depends on reappraising the meaning of death.

Most systems of yoga distinguish truth from misconceptions. The underlying problem is misunderstanding. We identify ourselves with our thoughts and our likes and dislikes, instead of the awareness that witnesses everything. The solution is knowledge, which in most of the Upaniṣads means oneness with consciousness. However, this is easier said than perceived.

Appearances can be misleading, warns the Śvetāśvatara Upaniṣad (4.9–10). We get confused “by the illusory power” of the material world through a process called māyā, meaning “magic,” or “power.”6 Despite the apparent separateness of things, each of them is Brahman, which is “one, without a second” (Chāndogya Upaniṣad 6.2.1).7 Some later commentators argue that māyā means the world is unreal, but it might just be that Brahman is unique, not that nothing else exists on a relative plane.

In any case, the mind gets entangled in matter, drawn out by the senses to focus on objects. In response to what we see, hear, smell, taste, or touch, we experience desire for the things we enjoy, and an urge to avoid what feels unpleasant. Although this is part of conventional life, it can get in the way of perceiving the truth. Therefore, a wise man “withdraws all his sense-organs into the self,” because “one who behaves thus throughout life reaches the region of Brahman and does not return” (Chāndogya Upaniṣad 8.15.1).8

Withdrawal from the world might sound extreme, but it is said to be the way to avoid rebirth, the primary goal of early yogis. The clearest teacher is Death, who appears as a character in the Kaṭha Upaniṣad (2.18), telling his student Naciketas: “The intelligent self is neither born nor does it die. It did not originate from anything, nor did anything originate from it. It is birthless, eternal, undecaying, and ancient. It is not injured even when the body is killed.”9

This liberating truth can be “difficult to grasp, when it is taught by an inferior man,” Death says. “Yet one cannot gain access to it, unless someone else teaches it. For it is smaller than the size of an atom, a thing beyond the realm of reason” (Kaṭha Upaniṣad 2.8).10 The aim, he tells Naciketas, is to find “the eternal among the ephemeral,” or in other words to focus on presence—not material things that decay, or passing thoughts (Kaṭha Upaniṣad 5.13).11

“One becomes freed from the jaws of death, by knowing that which is,” among other definitions, “without beginning, and without end” (Kaṭha Upaniṣad 3.15).12 The body itself might perish, but life will continue in others, sustained by consciousness. What we think of as “me” is an imagined persona, used to function in the world. As a result, there is no one to die. This message is conveyed in a chant requesting guidance to see through illusions (Bṛhad Āraṇyaka Upaniṣad 1.3.28):

From the unreal to the real, lead me.

From the darkness to the light, lead me.

From death to immortality, lead me.13

The objective of yoga is freedom from suffering, but when is this reached? Early texts are ambiguous, depicting sages who seem to be enlightened, while teaching that death is the point of release from being reborn.

As explained in the Upaniṣads, the karmic process of reincarnation is ended by knowledge. Perceiving oneself as connected to everything else can remove the illusions sustaining desire, which keep people trapped in endless lives. What remains is a timeless awareness, described as the oneness of ātman and Brahman. “When one awakens to know it, one envisions it, for then one gains the immortal state,” says the Kena Upaniṣad (2.4–5). However, “the wise become immortal, when they depart from this world.”14

Others say release happens sooner. “The wise see, by knowledge, the immortal form of bliss shine out,” declares the Muṇḍaka Upaniṣad (2.2.8),15 while both the Bṛhad Āraṇyaka (4.4.7) and the Kaṭha Upaniṣads (6.14) state: “When they are all banished, those desires lurking in one’s heart; then a mortal becomes immortal, and attains Brahman in this world.”

Vedantic commentaries call this condition jīvanmukti, which means “emancipation whilst alive.” However, the term does not appear in the Upaniṣads, or in the Mahābhārata, whose teachings on yoga are almost as old. It is also not found in the Yoga Sūtra a few centuries later, where the liberated state is called “aloneness,” or kaivalya—completely separate from material things, to which the yogi is indifferent.16 Descriptions of “one engaged in yoga” in the Mahābhārata (12.294.14–17) sound just as detached. “He is motionless like a stone,” the epic reports. “He neither hears nor smells nor tastes nor sees; he notices no touch, nor does [his] mind form conceptions. Like a piece of wood, he does not desire anything.”17 Another passage narrates how a king reached celestial heights by effectively starving himself to death: “Eating [only] water for thirty autumns, he kept his speech and mind under restraint [and] performed asceticism in the midst of five fires for a year. And he stood on one foot for six months, eating [only] air. Then, having a reputation for virtue, he went to heaven” (Mahābhārata 1.86.14–16).18

However, dying is not the answer in itself. Liberation arises through insight, so once this is attained, says the Bhagavad Gītā (2.54), one is “steady in wisdom” and able to act, not obliged to do nothing awaiting deliverance in the afterlife.19 “Renunciation and the yoga of action both lead to ultimate bliss,” the Gītā teaches. “But of the two, the yoga of action is better than the renunciation of action” (Bhagavad Gītā 5.2).20

Each of these texts gives a different response to the problem of karma. Some of their solutions may sound unappealing—unless we see the world like an Iron Age ascetic. However, regardless of what we might think about reincarnation, the outcomes of actions are felt in this lifetime. By looking inward to see how this works, we can learn to let go of unhelpful patterns.

Patañjali leaves it unclear whether liberated yogis can live in the world. He describes how to set oneself free, but says matter is “devoid of any purpose [when] the power of consciousness is situated in its own essential nature” (Yoga Sūtra 4.34).21

The emancipated state of kaivalya can mean both “oneness” (in the sense of integration as the witnessing puruṣa) and “aloneness” (in the sense of separation from the world).22 Either way, there is no indication of future activity. Material existence seems part of the problem, so the solution is to shut down the mind and detach from the body. Or as one scholar puts it: “Yoga requires that the person disintegrate.” This gloomy conclusion by Yohanan Grinshpon imagines kaivalya as “the absolute, unfathomable end,” both “infinitely deeper and more final than death.”23

Others dispute this. There is no obligation to sit like a stone for the rest of one’s life. But this is what kaivalya appears to imply, so doing something different suggests stopping short. An alternative reading by Ian Whicher regards kaivalya as “a permanent identity shift,” in which the personal worldview disappears. Consequently, he explains, “our egocentric patterns of attachment, aversion, fear, and so forth have been transformed into unselfish ways of being.”24

Appealing as this might sound, it is not actually discussed in the Yoga Sūtra, whose only objective is to isolate consciousness. It makes no mention of what happens next. Whicher’s appeal to compassion has more in common with the bodhisattva vow of Mahāyāna Buddhists, who postpone liberation to help other beings. “Actions must not only be executed in the spirit of unselfishness (i.e., sacrifice) or detachment, they must also be ethically sound,” Whicher writes.25

This is not quite the same as Patañjali’s message. He aims to change people’s conduct to silence their minds and retreat from society, not to get more involved with it.26 Of course, his methods can still be combined with a different outlook. Whicher highlights a sūtra (1.5) noting that thought can be “either detrimental or nondetrimental.”27 Since mental activity gets in the way of perceiving consciousness, it could only be nondetrimental if free of afflictions. This would make it enlightened, inspiring altruistic action.

However, if Patañjali wished to promote that, he could have done so explicitly. There is only one allusion to anything similar, in the commentary accompanying sūtra 4.30: “On the cessation of those afflictive actions, the enlightened person is liberated even in his lifetime. Erroneous knowledge being the cause of rebirth, no one with attenuated [misunderstanding] is born again.” Regardless, the aim is to leave the world behind, not to live more harmoniously with others.

Patañjali’s sūtras are often presented as versions of therapy, facilitating happiness and greater fulfillment. Many of their insights alleviate suffering, but unless we abandon worldly life, our goal is different. Most modern practitioners live in society, drawing on the sūtras to cut through illusions and act with more skill. From Patañjali’s perspective, this keeps us entangled. Perhaps the discrepancy means his philosophy needs updating, but claiming he says something different creates more confusion.

The Truth of Yoga, by Daniel Simpson, is published on January 5, 2021, by North Point Press. Find out more at http://www.danielsimpson.info.