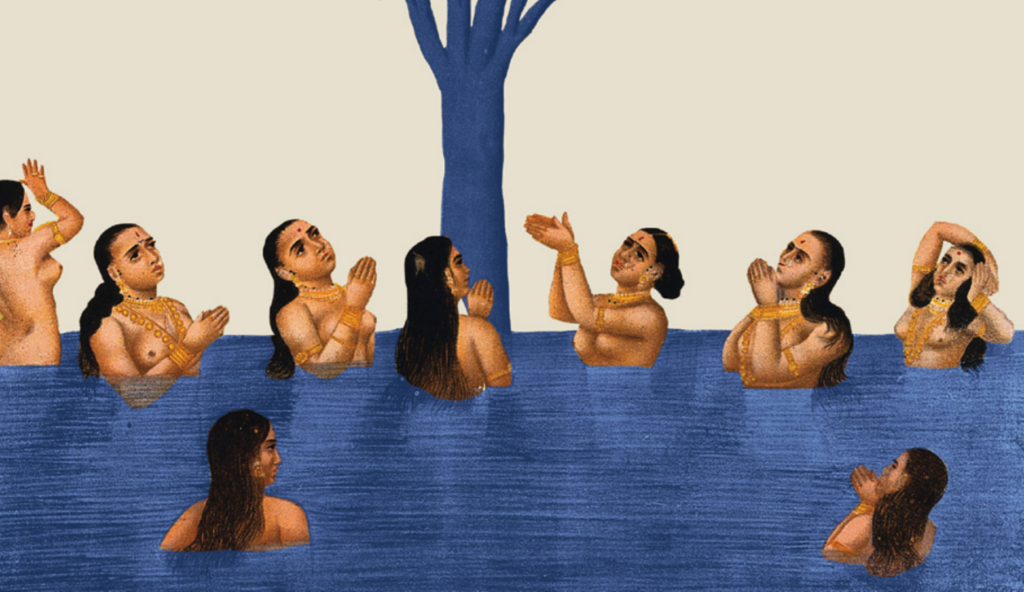 Bhakti Yoga: Tales and Teachings from the Bhāgavata Purāṇa by Edwin F. Bryant.

Edwin Bryant is well known in the realm of modern yoga studies for his translation of the text and commentaries of the Yoga Sūtras (2009).  This 2017 edition, Bhakti Yoga: Tales and Teachings from the Bhāgavata Purāṇa, takes up an approach similar to that of the 2009 volume, offering a comprehensive introduction to the subject of bhakti yoga, including a review of its historical context, a fresh translation of core texts, and a discussion of the classical commentaries that are most relevant to the tradition and texts.  In doing this, one of Bryant’s most significant accomplishments is that he offers a bridge to the intelligent, non-specialist while retaining a level of scholarly integrity that is often bypassed in texts pertaining to yoga.  This bridge exists because Bryant not only offers the raw materials for study, but he also explains and demonstrates a traditional method for study that looks at early commentators within the respective tradition as a primary basis for interpretation.  For academics, this approach is expected, yet much of the literature on yoga that relates to a classical text fails to look at classical commentaries and, as a result, tends to offer more biased and modern interpretations.  To delve into either Bryant’s earlier text on Yoga Sūtras or the current edition on Bhakti Yoga is to directly encounter the earliest authoritative voices within their respective traditions.

Bhakti Yoga is divided into five parts (six if you also count the introduction), each of which could stand alone as a supplemental text for a course or discussion group.  Set together, they provide a broad view of the tradition of bhakti within the Vaiṣṇava school of Hindu theology.  Part 1 is an introduction to bhakti yoga, including a systematic look at the nine vaidhī (prescriptive) practices of bhakti.  Part 2 is a collection of translations from the first nine books of the Bhāgavata Purāṇa with a focus on yogi and sage exemplars.  Part 3 highlights selections from the 10th book of the Bhāgavata Purāṇa, on Krishna and his līlās, or blissful pastimes and the various emotional states that are conducive to Krishna bhakti.  Part 4 is a translation of the śiksāṣṭaka, “The Eight Verses of Instruction,” the only written work composed by Caitanya, the famous poet-saint and inspiration for the Gauḍīya Vaiṣṇava tradition of Hinduism.  Lastly, part 5 is a translation of the eighty-four sūtras of the Nārada Bhakti Sūtras.

In the vast corpus of Hindu teachings, timelines can be elusive and understanding how one tradition relates to another is a particular challenge for beginning students. Bryant’s regular reference to Patañjali’s Yoga Sūtras, especially in the first part of this text, will help readers who are familiar with that earlier text integrate and understand the concepts of the bhakti tradition.  Indeed, the practice of yoga as dhyāna (meditation) found predominantly in the Yoga Sūtras highlights withdrawal of the senses and contrasts the path of bhakti. This contrast between withdrawal and engagement is an important theme in the Bhāgavata Purāṇa and in Bryant’s analysis of the two traditions.  Bryant’s Bhakti Yoga opens up an area of study often overlooked by students of modern yoga in a way that makes it accessible and relevant.