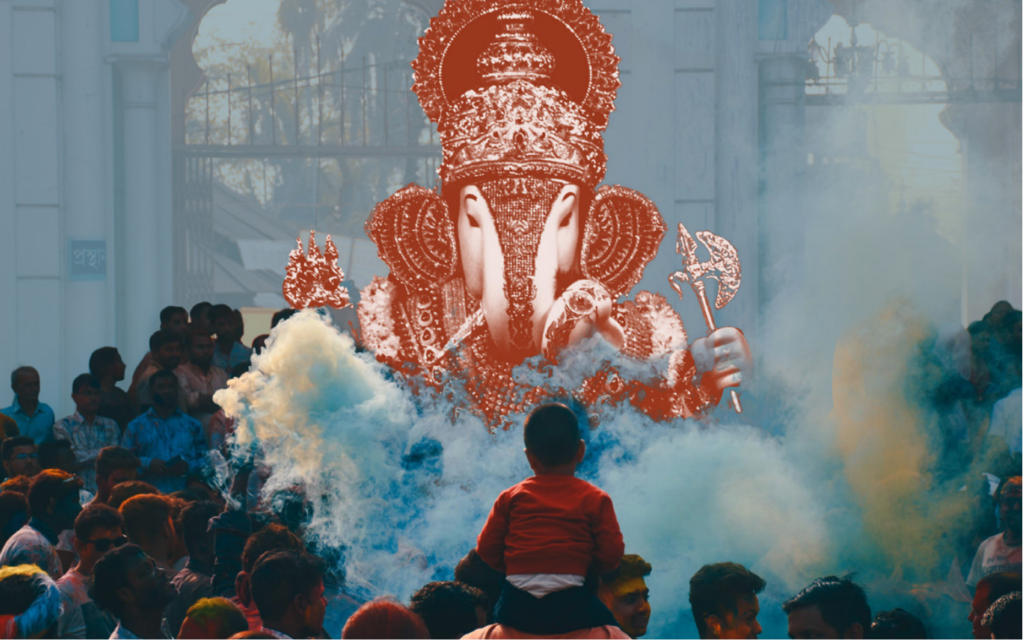 There’s a certain kind of magic in deity yoga, where we develop an intimate relationship with the deity, the object of our adoration. Pūjā is the procedure of developing this deep and sweet intimacy.*

The word “pūjā” is made up of pū, which means to purify or cleanse, and jā, which means birth. Essentially then, pūjā is a ritual of adoration of a deity with the goal of purifying or sanctifying our lives. Importantly, the deity becomes the ideal through which our lives are beheld and in the way we conduct ourselves from moment to moment.

Pūjā is an essential part of life and sādhanā in many paths and traditions – the goal and purpose of ritual will therefore differ according to the path. It can be viewed as a barter system, where the pūjā is performed with the explicit purpose of getting something in return. It can also be rooted in superstition, where the fundamental premise of the procedure is not really understood. This is not to say that we need to understand every aspect of the procedure right off the bat, since the purpose of pūjā is to guide us to a deeper understanding of the ritual.

Bhakti is translated in many ways and commonly understood as devotion. Devotion is something that most of us thrive on and practice routinely – we can be devoted to our work, partner, children, home, community, nature, and so on. In essence, then, bhakti is the sense of love and reverence that an object incites in us, where we are willing to give of ourselves. In parenting, for example, our devotion to our children brings out an entire spectrum of qualities we didn’t even know we had. We are fierce in our protectiveness, forgiving in our actions, loving in our thoughts, and will bend over backward for our children. They become the center of our universe, where we are constantly thinking about their well-being and how we can contribute to their development.

This is not very different from devotion to a deity! We can approach a deity in a relationship that moves us in the human realm – as a beloved, a parent, or a child. Some of the most beautiful examples of such bhakti-rich relationships are seen in the Bhāgavata Puraṇa, especially the story of Lord Kṛṣṇa. He is approached in bhakti as a child, a beloved, a teacher and mentor, and even as an enemy. In each case, the bhakti leads to transcendence; the dualistic relationship with Him lends itself to nonduality, catalyzed by bhakti.

Pūjā is the art of cultivating this kind of catalytic devotion that leads to such refinement of our body, mind, and intellect that the relationship we have with the deity collapses into a shimmering, lived experience of oneness – not just with the deity but with everything!

Moving From Duality to Non-duality in Pūjā

Despite the many definitions of bhakti, for all intents and purposes, it is the fuel for sādhanā  (practice). It is the motivation to take up a practice – any practice – and to stick with it. Without this motivation and love, why would we want to seek out our meditation mats, practice mantra japa (systematic repetition of a mantra), or seek out like-minded people? While bhakti is commonly displayed to be particular outward modes of expression of love for the Divine, it doesn’t actually look any one way. We don’t have to wear a particular garb, beads, sway to kirtan or swoon in ecstasy – these are not the only valid expressions of bhakti! It can be expressed as stillness, quiet reflection or deep contemplation.

In pūjā too, bhakti is the fuel for performing the ritual and the longing for oneness with the deity through it. When we take up a pūjā ritual, it can start off being clunky. The coordination of offerings and mantras can be confusing and feel artificial. With continued practice, the procedure becomes increasingly familiar. At this point, it is crucial to notice what happens in our inner landscape – how does the pattern of the breath shift with particular offerings? Is there an automatic contraction of certain muscle groups with certain movements? What happens to the flow of our attention?

When we start off with pūjā, the deity appears distinct and separate from us, perhaps seated or standing in front of us. The relationship at the outset is dualistic, with the deity “there” receiving prayers and offerings from us “here.” With continued practice and inward focus during pūjā, a fascinating shift begins to happen. The boundary between us and the deity becomes increasingly more transparent and eventually dissolves. At this point, the deity is no longer outside of us. Instead of being restricted to the mūrti or image, the deity becomes a diffuse living and breathing presence. S/he is “in” the picture of idol, but also in the offerings. S/he is in our breath, the sound of the mantras we chant, the mudras our hands make and in the spectrum of feelings and thoughts that come up when we are doing the pūjā. Somewhere along the way, we come to see that the deity is within us as the power of illumination. We now begin to direct our offerings to this illuminating power within. With further deepening of sādhanā, the deity takes over the worship. S/he is now only the receiver of our offerings but the one that offers.

It begins to dawn on us that this has always been the case. The deity – the power of illumination within – has always been both the doer and enjoyer – not only of pūjā but everything we have ever done and will ever do. The deity is all that exists. S/he is the Source – of the universe and of us.

What we had taken to be the “I” was a mere shadow of our true identity, which is not separate from the deity. With this realization, pūjā becomes saturated with joy and love. While bhakti was previously directed toward an entity that seemed distant and separate, it is now a deep love for our own self. In other words, we have fallen in love with our own self. However, this self-love doesn’t arise through affirmation or convincing ourselves about our own worth. It is the result of tapping into the very Source. This is the magic of pūjā.

*I am an initiate and practitioner of Śrīvidyā and Non-dual Śaiva Tantra, and my interpretation of pūjā therefore reflects the philosophy and understanding of these paths. Other interpretations based on other philosophies are certainly possible!