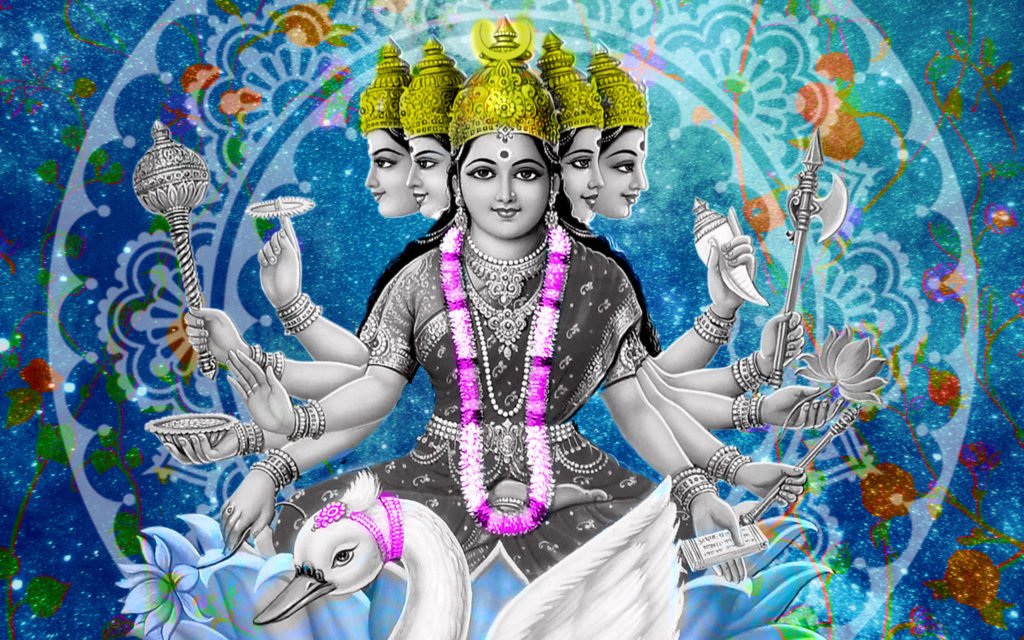 Mandala of the Divine Dance

Rādhā and Kṛṣṇa are depicted at the center of a joyous group of dancing milkmaids (gopis). The figures are portrayed in a circular dance, known as the rās-līlā, which means “sweet act” or “divine dance.” This celebrated event took place during a full-moon nights, when the milkmaids of Vrindavan snuck away from their households to the forest when they heard Kṛṣṇa playing his flute.  There, they danced and engaged in love play throughout the night.  Esoterically, this long “night” is the Night of Brahmā, which lasts approximately four billion years! It is a metaphor for the dance of life and for the romantic nature of Bhakti yoga, wherein a devotee falls in ecstatic spiritual love with the deity.

Viśvarūpa (Vish-vah-roo-pah) is wonder, awe, our most expansive mystical experience, shown in traditional artworks as a composite being representing all living beings considered as a whole.  His name literally means “Universal Form.”  This is the supreme soul manifesting all its forms and attributes simultaneously. It is one of the most popular subjects for sacred artists, one that challenges the imagination and allows for great creative freedom.

Viśvarupa is generally associated with a specific description of Kṛṣṇa in the Bhagavad Gitā, the renowned Hindu text.  The story is set amidst a civil war; it is an allegory for our own inner spiritual battle, the practice of yoga, and the nature of reality.  Bhakti Yoga was described as a distinct spiritual path equal to the other classical yogas for the first time in the scripture.

In this tale, Kṛṣṇa drives a chariot for our hero, Arjuna-a metaphor for allowing god to direct our life when we are in difficult times.  Our physical body is the chariot and our senses are the horses that carry us through the world.  At one point during the discourse, after Kṛṣṇa has revealed many truths, Arjuna asks his friend to reveal his cosmic form: Viśvarūpa.  The awe-inspiring vision is so vast, beautiful, and terrifying that our brave hero is overwhelmed and begs for it to end.  So Kṛṣṇa returns to his familiar handsome self, and the story continues.

Rādhā and Kṛṣṇa, often portrayed as intertwined lovers, exemplify romantic love in Hindu myth.  It is noteworthy that Kṛṣṇa is her lover, not her husband; their affair is charged with the thrill of danger and secrecy.  This could be an allegory for devoting oneself to spiritual practice even when the rest of one’s family does not.  She was a simple milkmaid, but is usually portrayed as an enchanting young girl dressed in scintillating finery, surrounded by flowers and bucolic scenery, symbolizing the passion of her erotic play and zest for life.  Rādhā is considered the supreme goddess by her devotees because Kṛṣṇa enchants the world, but she enchants even him! She exemplifies the compelling power of romantic longing, as well as the bliss of union.  Her love for him was so deep that she came to see him in every person, all objects, becoming the very embodiment of devotion.  She possesses the power to attract the all-attractive personality of godhead, so she is the primordial potency of her beloved.  Far from being a servant or a subdued wife, she is jealous and chastises Kṛṣṇa when he strayed or neglected her for too long.

For the spiritual practitioner, the energy of longing for complete union is itself divine, as this impulse inspires one to seek beyond worldly concerns.  Rādhā embodies the nature of this divine longing, which is irresistible to the object of her devotion, Kṛṣṇa, who embodies the beauty of ultimate truth.

This rangoli for Mīrābai features a pair of peacocks, in honor of her dearest Kṛṣṇa, who always wears a peacock feather in his hair.  The national bird of India, this spectacular bird is significant for many reasons.  One is that its elaborate courtship dance and distinctive matin gcall coincide with the arrival of the monsoon rains.  After months of scorching hot weather, the cool rains are a blessing.  All of nature springs back to vibrant and colorful life.  So peacocks are symbolic of abundance, romance, and fertility-much like the handsome Kṛṣṇa.

During the festivals throughout India, common people make decorative rangolis like this one on the thresholds of their homes or on the ground, to welcome guests, beautify the area, and raise everyone’s spirits.  Although the designs are improvised and the symbols may not b e directly related to a specific deity, producing them is a devotional act.

Kṛṣṇa Gopāla (Krish-nah Go-paah-lah) is romance, beauty, play and pleasure.  He is the divine musician who plays the enchanting song we dance to in this game of life.  As a handsome youth, he participates in the common tasks of daily life, showing that divinity resides even in the most humble of circumstances.  Subject of innumerable works of art, poetry, and music, he is among the most popular of Hindu deities.  The famous Maha Mantra, known in the West as hare Kṛṣṇa, belongs to him.  Most people know only his youthful form, but he grew up to be a warrior, as described in the Bhagavad Gītā.  Many Hindus consider him to be a form of Viṣṇu, but to his devotees, he is supreme.