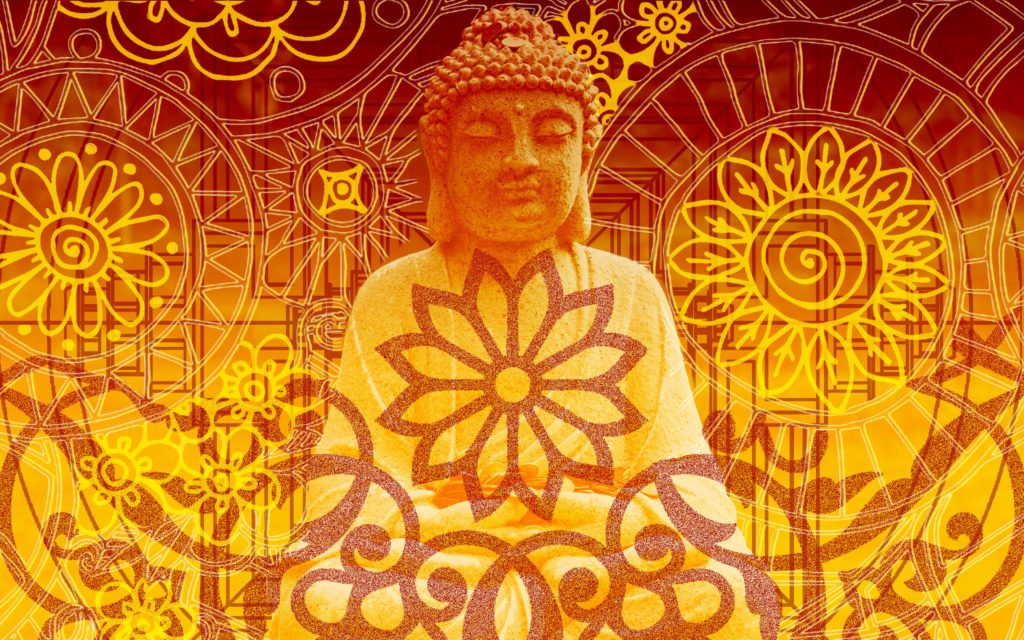 Virtual reality technology is on the cutting edge in our modern culture and will create a whole new way of experiencing the world for future generations; one that will forevermore blur the lines between reality and fantasy. Virtual Reality (VR) and Augmented Reality (AR) are only the latest iteration of humankind’s attempt to use technology to harness the power of creative imagination to shift perception. One might argue that the sophisticated visualization practices of the Kashmiri Shaivite and Tibetan Vajrayana Buddhist traditions, each over two thousand years old, represent our earliest power tools to engineer advantageous virtual reality simulations. Moreover, each system offers safeguards against misuse that are as relevant to spiritual practitioners today as they were centuries ago.

These ancient visualization practices and the contemplative science that underpin them are in remarkable alignment with recent findings in cognitive neuroscience and quantum physics. Yogis and scientists alike assert that the external reality we take for granted as objectively fixed and forced upon us as passive recipients is more accurately conceived of as an active mental construction that is subjectively projected by us, based on unconscious and reified mental images and verbal designations along with tacit social consensus. Literally, the world is like an illusion. The advanced meditative power tools of the Indic tradition and Himalayan region known as the tantras are essentially organic virtual reality inducers – what I call meditative flight simulators – wherein the yogi harnesses the known power of active imagination to generate a highly visceral, multisensory experience which reconditions mind and brain for the expressed purpose of rapidly producing the state of enlightenment.

Such profound power tools, like their modern iterations, are not without potential dangers. Tibet’s famous yogi saint Je Tsongkhapa (1357-1419) advised on the development of three human qualities to help safeguard practitioners from misusing the tantras and effectively benefiting from their liberative potential. In my book Gradual Awakening (2018) I review in detail Tsongkhapa’s pithy text  Three Principles of the Path (to enlightenment) wherein he outlines these provisional qualities, known as transcendent renunciation, altruistic resolve, and the correct view of emptiness. Together they form the quintessence of the Buddha’s public or exoteric teachings and their concomitant realizations, which are prerequisite for subsequent esoteric or secret tantric teachings.

The Buddhist notion of transcendent renunciation is the single-minded determination to be free of self-imposed cycles of stress and trauma. Ordinary consciousness and mundane life are largely oriented towards and conditioned by a hedonic agenda of pleasure seeking and pain avoidance known in Vajrayana Buddhism as the eight worldly winds. Through careful examination of our fruitless and dissatisfying pursuits in an impermanent world, one abandons them and makes the quest for spiritual liberation paramount. Tsongkhapa says, “With practice, your mind won’t entertain even passing fantasies of wealth or fame. But will aim for freedom day and night, then you’ve developed transcendence!”1

But living solely for one’s own liberation remains insufficient, even implausible, when one recognizes the delicate balance of interconnections that comprise the web of life. Interdependence means we cannot exist for even a moment without others, animals, and the biosphere. For better or worse, we are all inextricably bound, and so in order to fulfill our wish for liberation we must fuse it with an altruistic aspiration that includes the welfare of others. Tsongkhapa says, “Endlessly living and reliving the cycle of trauma, constantly suffering in body, speech and mind, such is the state of beings, all dear (and needed) as mothers – so from your natural response built heroic resolve.”2

Finally, the wish to be free fused with altruism is still insufficient, because the root affliction that creates disturbing emotions (kleśa) and reactive activity (karma) – keeping the evolutionary cycles of stress and trauma in spin – remains intact. According to Indic soteriology, what compels the wheel of endless suffering (saṃsāra) is a distorted or erroneous perception, known as delusion (avidyā).  It is this subtle habit of mind that reifies and identifies with self and other, creating the false dichotomy of subject-object dualism, thus initiating life’s chain of conditioned reactivity.  According to Buddhists and Hindus alike, for this root problem there is only one cure – the profound wisdom that intuitively realizes the open, fluid, nondual or empty nature of self and phenomenon. Like awakening from a prolonged nightmare, wisdom clears the doors of misperception and as Tsongkhapa eloquently states, “Correct knowledge (of the nature of reality) breaks the reifying habit, and your search for genuine insight is complete.”3

Taken together, these three principles – renunciation, altruism, and correct view – are more than principles; they are actual realizations required by each yogi for ethical and effective use of the power tools of the tantras. Each principle acts as a protection to safeguard consciousness from misusing virtual reality technology.

Without renunciation the yogi is in danger of being motivated by hedonic aims, gratification of the senses, and fleeting pleasures. Just do a Google search for the word tantra and note what comes up high in the rankings as an indication of how easily human beings allow themselves to be misled by their instincts and impulses. On the other hand, if ethically restrained and motivated by transcendent renunciation, even the power of desire and aggression can be harnessed, sublimated and purposefully directed.

Without altruistic resolve, the yogi is in danger of remaining insulated, myopic or self-interested even whilst cultivating a high spiritual ideal. One’s practice can’t be solely about oneself in isolation from a world of eight billion people, countless species and a very delicate biosphere. Since every living being is equally dear and crucial for survival as one’s own organs and limbs, the generation of altruism not only represents a high spiritual ideal but an exceedingly practical one essential to our own evolution. As the Dalia Lama often says, if you’re going to be selfish, at least be ‘wise selfish,’ by recognizing how your long-term interests are inextricably dependent on the welfare and happiness of others.

Without correct worldview – the wisdom realizing emptiness – the yogi is in danger of continuing to reify and falsely apprehend subjective identities and perceivable objects as discrete, enduring, pure and capable of providing lasting happiness. For example, there is a risk of transferring and superimposing the reification habit upon the virtual reality simulation of oneself as a deity and the world as a divine abode potentially increases the threat of narcissistic inflation, psychopathy or psychosis. On the other hand with correct view actualized the yogi creatively designs life just as a performance art, skillful means (upāya) or play (līlā).

Tibet’s ancient virtual reality power tools were taught to rapidly produce enlightenment by generating a compelling multisensory experience, which harnesses the nervous system’s innate capacity for higher consciousness, euphoric openness, and transformational insight. These advanced tantric methodologies were not dispensed wildly to the public but were taught in private to highly trained yogis strictly adhering to behavioral, motivational, and perceptual safeguards – framed by Je Tsongkhapa as renunciation, altruism, and correct worldview. The caveat of learning to put out the fire (of one’s desire and aggression) before learning to play with it, is a caution that is as relevant to yogis using the tantras as it is modern users of advanced technologies. In a world where we are now riding the waves of revolutionary breakthroughs in medicine, science and technology, we stand to learn so much from these ancient wisdom traditions about how to proceed cautiously and with greater, meaning, purpose, ethics and skill. Where there is great power, even greater responsibility must follow.