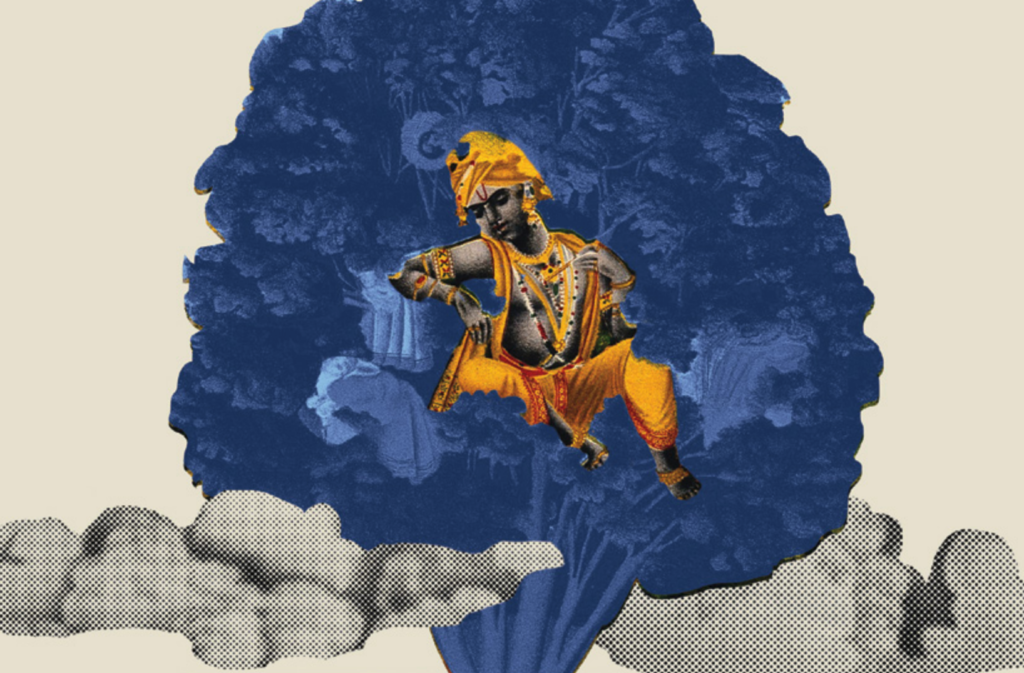 Young Kṛṣṇa among the cowherds is an iconic image central to North Indian Vaiṣṇava traditions of bhakti. Although Tamil South Indian literature and traditions developed and changed some of the elements, the basic characteristics of the narratives remained. For example, stories concerning Kṛṣṇa’s love-play with the gopīs (cowherd maidens) are paramount for understanding Southern Kṛṣṇa bhakti, where the union and separation of the gopīs with and from Kṛṣṇa become the primary material for understanding the devotees’ own union and separation with the divine.

The ancient Tamil worldview can be seen in classical Tamil poetry (called caṅkam), which spans nine hundred years (from the third century B.C.E. to the sixth century C.E.) The poetry is divided into two categories, akam (poetry of the “inside,” dealing with the inner world of emotions) and puṟam (poetry of the “outside,” dealing with the outer world of war, politics, the socius, and even religion).1 These literary sources portray ancient Tamil culture and religion as earthly and humanistic. The ideal Tamil man (cāṉṟōn) is very much of this world, a fleshly human, pursuing earthly goals, such as love and marriage. The personal divine, Murukaṉ, exemplifies the ideal: he is beautiful for love and heroic for war (master of both worlds of the akam and puṟam poems).2 The divine, in its various forms, resides immanently in this world. As a result, the fundamental character of ancient Tamil worship of the immanent divine was ecstatic and sensual. Communication with the divine was possible through the mediumship of a vēlaṉ (“he who [holds] the spear”). Dance, music, drums, garlands, and songs were all important features of Tamil worship.3

A variety of Southern Kṛṣṇa traditions emerged. Up to the fourth century C.E., Kṛṣṇa is associated in Tamil poetry with the king, folk religion, and love poetry.4 In the fifth century C.E., however, Kṛṣṇa’s function seems more emotional, tied to the literary setting of the “jasmine landscape” (the poetic setting of the wife waiting patiently for her husband to return from abroad).5 Other traditions ignore the theme of separation and instead integrate Kṛṣṇa into Tamil religion.6 Finally, the Kṛṣṇaite material in the sixth to seventh centuries C.E. takes the perspective of the Vaiṣṇava temple, viewing Kṛṣṇa as the transcendent Absolute.7

It is within this fluid, diverse, and creative context that the twelve Āḻvārs (“one immersed [in God]”) composed their devotional songs to Viṣṇu.8 For later Śrīvaiṣṇava communities,9 the Āḻvārs would become authoritative and have a special place in devotion as secondary incarnations (amśa) of Viṣṇu’s companions and attributes. In their own time, they brought together the humanistic cāṉṟōn anthropology; the classical Tamil poetic theory of landscapes; ecstatic, sensual folk religion; bhakti for the absolute Kṛṣṇa; and Northern narratives concerning the young Kṛṣṇa (with more and more emphasis on the gopīs, cowherd lovers of Kṛṣṇa). Profoundly Tamil in their literary constructions, earthly and humanistic images, and religious sensibilities, the Āḻvārs creatively transformed Northern Kṛṣṇa bhakti into the desire for ecstatic union with the lord.

The gopīs and themes related to the gopīs are important for a number of Āḻvārs. For example, in addition to explicit gopī songs framed within the “jasmine landscape,” Nammāḻvār (or Caṭakōpaṉ) composed many songs depicting a girl love-sick for Kaṇṇan (Kṛṣṇa).10 The emotions of the gopīs, particularly in the agony of their separation from Kṛṣṇa, serve as a focal point for bhakti practice; in identifying with the gopīs and the love-sick girl separated from her cowherd love, the bhakta is caught up into the divine drama of separation and union themselves.  In a different approach, Periyāḻvār (or Viṣṇucittaṉ) focuses on folk stories about Kṛṣṇa.11 The gopī rarely speaks;12 we see her largely through the perspective of her worried mother.13 Another cowherd mother is important for Periyāḻvār–Yaśodā, Kṛṣṇa’s foster mother.14 Her own joys and worries also stimulate the bhakta. Through the spectrum of a mother’s love, the bhakta is moved by Periyāḻvār outward and into the world of Kṛṣṇa. But the Tamil Kṛṣṇa bhakti cultivated through the Āḻvār use of the gopīs is not simply about emotion; it is a deeply embodied, holistic path. This is best seen in the song-poems of Āṇṭāḷ.

If–for most of the Āḻvārs–the gopīs serve as one (albeit important) inspiration for cultivating the human relationship with Kṛṣṇa, they are almost of exclusive importance to Āṇṭāḷ (or Kōtai, “flower garland”). The only female Āḻvār, Āṇṭāḷ’s two works are composed in the voices of the gopīs (Tiruppāvai) and the voice of the love-sick girl (Nācciyār Tirumoḻi). The Tiruppāvai follows a group of girls as they go to perform the pāvai, a Tamil ritual in the month of Mārkaḻi (mid-December to mid-January), where unmarried girls bath every morning in cold river or pond water to obtain blessings for a happy marriage. Over the course of the song, the gopīs prepare for the ritual (bathing, ascetical practices, singing, meditation, recitation, and almsgiving), wake up sleeping maidens, and go to Kṛṣṇa’s house for the ritual drum. They seek the aid of the gate guard, his cowherd wife Piṉṉai, and Kṛṣṇa.15 They declare that they do not actually want the ritual drum but instead seek Kṛṣṇa himself (the symbolic drum). They seek to serve Kṛṣṇa alone and ask him to change all their other desires to him. Āṇṭāḷ takes a humanistic Tamil ritual for marriage and transposes it into a ritual for divine-human marriage. The end of the Tiruppāvai confirms that the gopīs indeed receive the “drum,” and anyone who recites the Tiruppāvai similarly will receive the grace of Tirumāl (Viṣṇu).

The Nācciyār Tirumoḻi, the second of the two works authored by Āṇṭāḷ, focuses less on the imaginal world of the gopīs and more on the agony of the girl in separation.16 Fleeting experiences of union have ruined the girl: “Entering my heart/mind, he spoils me all day…scattering my life” (5.2).17 She is lovesick, suffering, and desperate. The first thirteen songs express this agony, culminating in a heated declaration: “I will pluck out my fruitless breasts at the root, and casting them on his chest, I will quench my fire” (13.8). Echoing the Cilappatikāram, a Tamil epic where the heroine manifests her righteous ritual power by tearing out her own breasts, Āṇṭāḷ calls forth the great bodily power the (female) bhakta has in her devotional practice. Abruptly, the fourteenth and final song of the Nācciyār Tirumoḻi shifts back to the plural voice and imaginal world of the gopīs. They sing with joy of seeing their cowherd lord in Vṛndāvan. The final verse confirms that “Those who live, putting these words in their mind as medicine, will abide at the excellent feed of the Lord without ever being parted” (14.10). Although thirteen of the songs cultivate the agony of separation from the lord, the fourteenth song assures the bhakta that union is to come.

In singing these songs and identifying with these voices, the bhakta enters into the world of the gopīs in their devotional practices, agony of separation, and ecstasy of union. Although both the Tiruppāvai and the Nācciyār Tirumoḻi end with an affirmation that those who sing the songs will attain union with Kṛṣṇa, the sensual and bodily language of the songs emphasizes the very physicality of devotion. The agony of separation is not a mere sentiment; it is deeply and bodily experienced. Throughout the songs, meditational, bodily, and ethical practices are all prescribed. Tamil Kṛṣṇa bhakti is not a path of disembodied spiritual union; it is an imaginative, holistic, and embodied bhakti. Thus, bhaktas are not called simply to recall the gopīs, but to be drawn into their world and follow them. Whether it is their controlled yogic practices, their single-minded pursuit of Kṛṣṇa, their ecstatic-suffering emotions, or their erotic relationships with Kṛṣṇa, the gopīs model the embodied path to union with the divine in the Tamil Kṛṣṇa bhakti of the Āḻvārs.