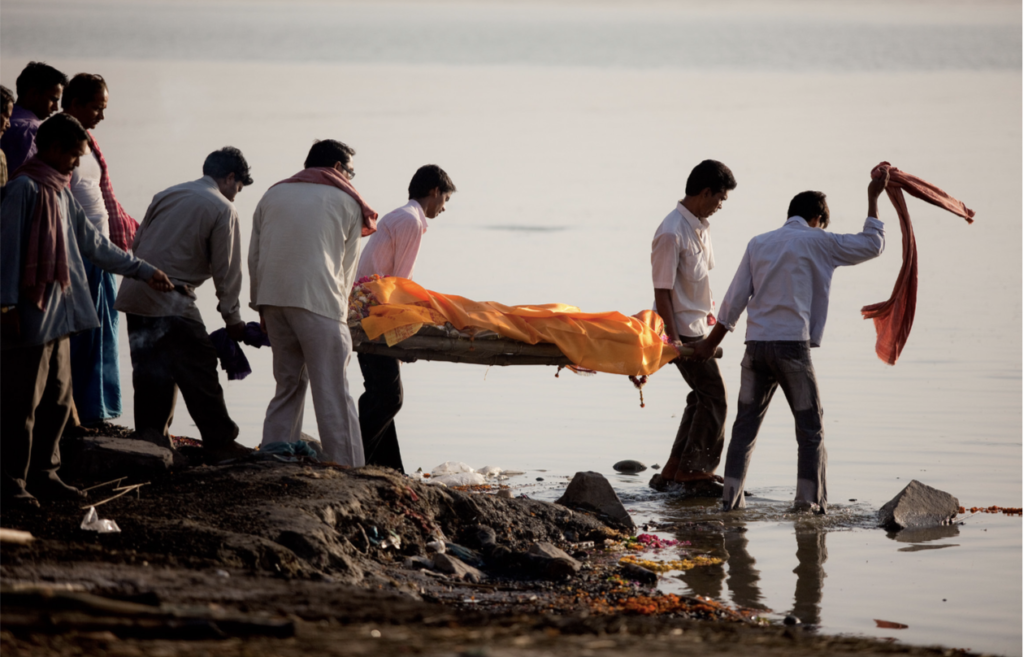 “Burn him not up, nor quite consume him, Agni.
Let not his body nor his skin be scattered.
O All-Possessing Fire!
When you have fully cooked him, send him on his way to the Ancestors.”

King Parikshit had blundered—as arrogant royals are wont to do. He’d come upon Rishi Shamika absorbed in samādhi during one of his hunting sojourns in the forest. Seeing the sage motionless and still, he thought it would be fun to mock him. How could he know, so deep was he in his meditation?

Just near the sage happened to lie a dead and decaying snake. King Parikshit lifted it with his goad stick and slung it around the rishi’s neck. “Now he really looks like Shiva!” taunted the fool.

And just then the rishi’s son, Sringin, happened to witness the disrespectful and inappropriate act. To defend his father’s honor, he administered a curse on the king, who graciously accepted his punishment.

King Parikshit would die in seven days from a fatal snake bite. A snake was procured who administered the death sentence and the king awaited his fate.

I often wonder if I were in the same situation how would I pass the seven days? Would I frantically seek a cure? Would I flail and throw a fit? Or would I just give up and cry?

King Parikshit decided he wanted to spend his remaining days listening to the life of Śrī Krishna retold in the Bhāgavata Pūrāṇa. Sage Suka was called to narrate the deep cosmological message within the tales of the cowherd from Vrindavan and his ascension to the Dwarka throne.

The Pūrāṇas in general (and the Bhāgavata specifically) are designed to couch deep philosophical and scientific observations about the universe in the language of myth and symbol. In the stories of Krishna’s life, the Bhāgavata Pūrāṇa outlines the Vedic theory of evolution—which takes place over lifetimes through a prescribed course of life, death, and rebirth. And it outlines most importantly what a soul should do to prepare for death.

Through listening, the king was imprinting the pathway to positive, evolutionary rebirth in his consciousness upon his death. He was using his time wisely, from a Vedic perspective.

There’s a Sanskrit expression that summarizes the soul’s journey, its positive ascension up the Vedic evolutionary ladder, and its future birth upon death: yaḥ matiḥ, saḥ gatiḥ. Yaḥ matiḥ means “as is the thought one cherishes in the heart” and saḥ gatiḥ means “there goes the soul.”

In the Vedic universe, evolution depends upon the habit of our thought. It means that our consciousness can be impressed. It means we construct our reality both present and future by how we routinely think.

Upon death, the senses fall off one after another. The final sense to depart is “I am.” From the Vedic view, the way in which that “I-sense” has been impressed in the deepest and most heartfelt way will define its next birth. “This is why we recite the name of god,” my Sanskrit teacher once told me. “So we can win a favorable re-birth.”

“What constitutes a favorable rebirth?” I wondered. As if reading my thoughts, Panditji answered, “The soul follows a path upon death based on what he holds dearest and thinks about the most. This is called his gatiḥ. A gatiḥ can lead you toward four types of rebirths—either you’ll be reborn a demon, an animal, a human or a god.”

By listening to the re-telling of when Divinity walked on earth (and all the hidden secrets of the universe), King Parikshit was preparing his mind positively. He wasn’t filling his head with fear and worry, knowing those thoughts as his last would lead him toward hell. He was aligning himself with a higher evolutionary course.

When a child is born, she’s given an opportunity to evolve or devolve. It’s the parents’ duty to culture that opportunity toward a higher evolutionary goal. They’re responsible for imprinting the consciousness of the child with evolutionary-positive impressions. These are the saṁskāras (rites of passage) performed through distinct moments in the lifecycle.

Skāra means “to scar” and saṁ means “positively” or “in alignment.” Human birth presents us with a choice. We can either align with demonic tendencies and fall down the evolutionary ladder or we can become gods. It all depends on what we choose to reinforce in thought, speech, and action—by either repetitive thought or ritual.

The first scar is one we’re born with—the time of our death. It’s fixed. Every saṁskāra—from the naming ceremony to the eating of first rice to the cutting of hair to marriage—has this time and its destiny as its ultimate goal. These saṁskāras are meant to keep the soul in alignment with the universal dharma, of which it is a perfect replica. Then the soul at death naturally follows the right gatiḥ that leads to a more favorable rebirth.

The final saṁskāra—the last rites of the soul—is structured around the idea that the microcosm of a living being is the same as the macrocosmic universe. This is dharma, which is the goal of the Vedas. The body returns to the five elements and the soul finds its way through a myriad of possible stations upon death within the one united field. To attain a more favorable “post” within the field of Being requires a lifetime of positive “scarring” of the consciousness.

The most important scarring of death is its time. Just like the exact moment of birth defines the life journey of a soul, the exact moment of death defines its fate. Because it’s fixed by the soul’s karma carried into this birth, the path in some ways is already determined. The best we can do is to not make it worse by our misdeeds and thoughts.

Afterward it’s the responsibility of the living descendants to positively “scar” the departing soul toward the best station possible—despite his good or misdeeds. These are the antyeṣṭi saṁskāras. Anta means “final” and iṣṭa means “desires.”

Through ritual observance, the innermost and deepest desires of the soul are directed toward Brahma Loka—the highest and most blissful of heavens. This is the intent of the mourners. But the soul may not have earned that merit. It may end up in Indra’s heaven, which isn’t so shabby, since therein no pain or duality is suffered. Or, more commonly, the soul will enter the realm of the ancestors, Pitra Loka, and come back around again the next birth in the same family.

“These rituals are absolutely necessary,” my Panditji assured me. “If you don’t have any children or you don’t want to burden them, you can even perform them yourself—substituting your body for one made of clay.”

“What if I don’t perform these end of life rituals?” I inquired. He looked at me blankly, astonished that I didn’t know what is obvious. “You’ll be reborn a bhūta! A ghost!”

The final “scarring” of the soul takes place over 10 days upon the “attainment of fullness,” (pūrṇa tithi), the moment of death. The body is washed, shrouded, anointed, and garlanded. This is done at home, in the presence of the family. Then the deceased is placed on a cot and carried out the door head first, mimicking how we entered the world—head first, feet last.

Traditionally, a procession of mourners accompany the body led by the eldest or youngest son to the bank of a river. You can’t miss its eerie pronouncement if you live in any Indian neighborhood—“Ram nam satya hai! The name of God is truth!” Death isn’t hidden away. It’s here, in your face.

The body is then placed upon a pyre of logs. The son lights the fire. As it catches, the flames consume the flesh and bones as the blood spills over the wood, making a splattering sound. A smoke arises that will forever remind you “I’m next.”

Then comes the final moment in the ceremony that determines the path of the soul—the kapala kriyā. The chief mourner pierces the burning skull with a stave. The soul exits the body through the top of the head.

It’s said the bodily location in which the soul exits also determines his evolutionary destination. The body itself has “evolutionary” portals and the soul will follow its habit. The worst is to exit through the anus; the best through the top of the head. The “lower” centers of the stomach, genitals, and anus lead to their corresponding stations—and the soul suffers the fate of his gluttony. The “higher” centers of the heart and the top of the head define a better path—toward the gods—achieved by favoring divine thoughts and actions.

After the cremation comes 10 days of mourning—the first three are spent without food. On the third day a ball of dough is made. It’s invested with life, brought to a river bank and released. This imitates what’s happening now to the soul. It’s finding its way to a new birth.

The ball of dough—the piṇḍa dān— set free in the rushing river waters is like the sperm meeting the egg in the waters of the womb. The soul is rushing toward its new birth. It enters the embryo as its consciousness, just as it does in the third month of pregnancy.

Each of the remaining ritual days follows the monthly development of the baby until it reaches the 10th day—the final month of gestation.

The soul now is ready to reincarnate. A vessel that has contained water for the 10-day duration is smashed, completing its final “scarring.” The womb waters break. The soul is born again.

Featured Image Credit: Recently deceased elderly Indian man is brought to the Ganges river as part of a Hindu funeral ceremony before he is cremated. 2010, Varanasi, India. Getty Images.