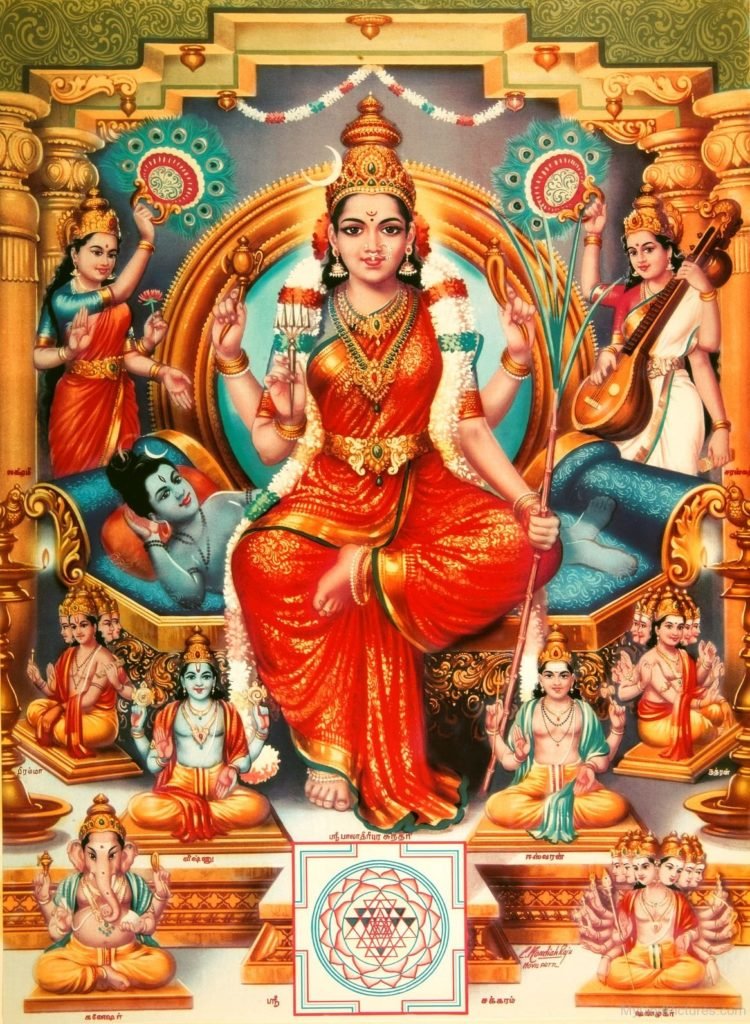 “Deity Yoga” as a phrase is mostly associated with Tāntrik Buddhism such as Vajrāyana, where identification with a chosen deity occurs through various rituals and visualizations. The phrase has been adopted in other traditions to mean numerous things, but here, we’ll explore it from the perspective of Nondual Śākta Tantra. It is an appropriation of sorts since “Deity Yoga” as a phrase doesn’t occur in traditional sampradāyas (streams or lineages).

To understand the basis of Deity Yoga in this particular tradition, let’s start at the beginning. Nondual Śākta Tantra holds that the Divine is the ultimate reality that is both form and formless, immanent and transcendent. The transcendent here refers to the reality that is out of the range of the manifest universe. It is formless, but is the very essence of form. The transcendent Divine is devoid of attributes such as name, form, space, and time. Conversely, the immanent Divine is endowed with attributes. As form, this aspect of the ultimate reality is everything in manifestation.

One way to understand these two aspects of the ultimate reality is to call them Śiva and Śakti. That which remains transcendent and formless is Śiva. That which takes form and becomes immanent is Śakti. In other words, all forms are Śakti, endowed with various attributes such as mass, size, and inherent properties such as sex and genetically – and environmentally – derived factors.

What is important to understand is that the one ultimate reality becomes countless forms. I like to look at this magnificent teaching by way of a simple example – white light passed through a prism separating into its component colors. In the case of Śiva-Śakti, the ultimate reality takes on countless hues and vibrations as the galaxies, planets, stars, atomic, subatomic structures, and you and me.

Deities and the Fabric of Reality

If we were to think of the ultimate reality as containing an inherent and intricate pattern, the countless aspects of it could be personified as deities. They appear hierarchical depending on how the pattern is held together; those that are critical to the pattern are placed higher while others are subordinate to them.

A critical concept to understand in this tradition is the mirroring of the macrocosm in the microcosm. What this means is that we (the microcosm) are a part of the greater cosmos (the macrocosm), and yet reflect all of it and contain all of it. This is much like a floret of broccoli, which is a fractal of the whole head. We have the entire creation within us – it’s just that ordinarily we have no access to it.

Accordingly, a deity in the macrocosm is also present in the microcosm. In other words, who we are is the ultimate reality and within us, we contain the entire fabric of creation along with all the deities of the pattern in its infinite combinations of hues and vibrations. When we zoom in on a particular deity to work with, we engage with that part of the pattern, expanding out into the whole. We access the macrocosm through the microcosm, the whole through the part, the ultimate reality through a particular deity.

Deity yoga then, is quite simply, the realization of this oneness with the chosen deity. However, it doesn’t stop there. A given deity is a portal to the ultimate reality, no matter where they are stationed in the pattern of creation. If we can know this in practice and experience, we are catapulted into the profound realization of the entire pattern.

While we may think that this practice is based entirely on complex mantras and mudras (gestures) to be successful, nothing can be further from the truth. The most important ingredient is devotion. We have to want to love and adore the deity “just because,” without an agenda. While we may come to the practice with the motive of using the deity as a portal, constant refining of devotion does away with all such motives. The deity rules supreme in our consciousness, becoming the focal point of our thoughts, emotions, and actions. We wake up in the morning and fall asleep at night thinking of the deity. Whatever we say, think, feel, consume or purge is for the deity. S/he rules over our waking state, seeping over into the dream and deep sleep states. We gradually start to see the deity in others, as well as in the mirror. Life circumstances begin to flow as the deity’s grace. Nothing is held as “mine,” and all is surrendered to the deity in guileless love.

Mantras are of different kinds, but the ones that are most important in deity practice are known as bīja (or seed) mantras. Think of a bīja mantra as a specific vibration that corresponds with a particular deity. When used to invoke the deity, it is like a key fitting into a lock, or simplistically much like us responding to being called by our name. The caveat, however, is that the bīja is most effective when it is enlivened by long practice, where it comes alive – as in, the key pops the lock open. A mantra is enlivened at various paces, but the fastest way is through initiation, where it is passed on from a teacher for whom it is alive to a student that is open to receiving it. When steadily practiced with devotion, the mantra opens to the next ingredients.

Over time (or suddenly, depending on grace), devotion enables the cultivation of discernment and dispassion, and the entire pattern of reality begins to shimmer in our consciousness. We begin to dip into the fundamental, all-encompassing vibration underlying all of creation. Patterns and pathways begin to arise automatically in our consciousness as novel neural and hormonal pathways are forged. Yantras, mandalas, and other forms of sacred geometry begin to spontaneously arise in our inner vision, connecting all kinds of knowledge, understanding, and circumstances into a magnificent unified whole.

Grace of the Deity:

An important turning point in our devotion is the understanding that although the deity is usually invoked for a particular purpose, this is merely a limitation of the practitioner. Take, for example, the glorious Lakṣmī, who is popularly invoked for abundance and wealth. However, what we fail to see is that our very definitions of abundance or wealth are limited and corrupt. When we remain caught up in a particular idea about wealth or abundance, the results of our practice also remain limited. On the other hand, if we approach Lakṣmī with agenda-less love, our practice is rewarded with her grace by way of ever-deepening discoveries of abundance in ways we couldn’t have previously imagined. She no longer remains in our consciousness as the goddess of abundance; instead, she becomes the face of supreme reality!

The Śrī Cakra is one of the greatest examples of this principle, where any of the deities of its various components can become portals to the ultimate reality in the bindu.*

Although each deity has her/his own attributes usually symbolized in iconography (form, implements, etc), we must be careful to not reduce a deity to psychological or human archetypes. Deities are not archetypes in the conventional sense of the word. We have to understand that even iconographies and archetypes are projections of the human mind, and deities are beyond the grasp of the mind!

While iconographies serve to invite us in to worship and practice, they aren’t set in stone. As any serious practitioner of this practice knows, the deity can change forms and implements suddenly and unpredictably, or gradually and gently.  S/he can show us the entire fabric of reality, shapeshifting, expanding, and contracting into countless forms. It all depends on how open we are to that possibility.