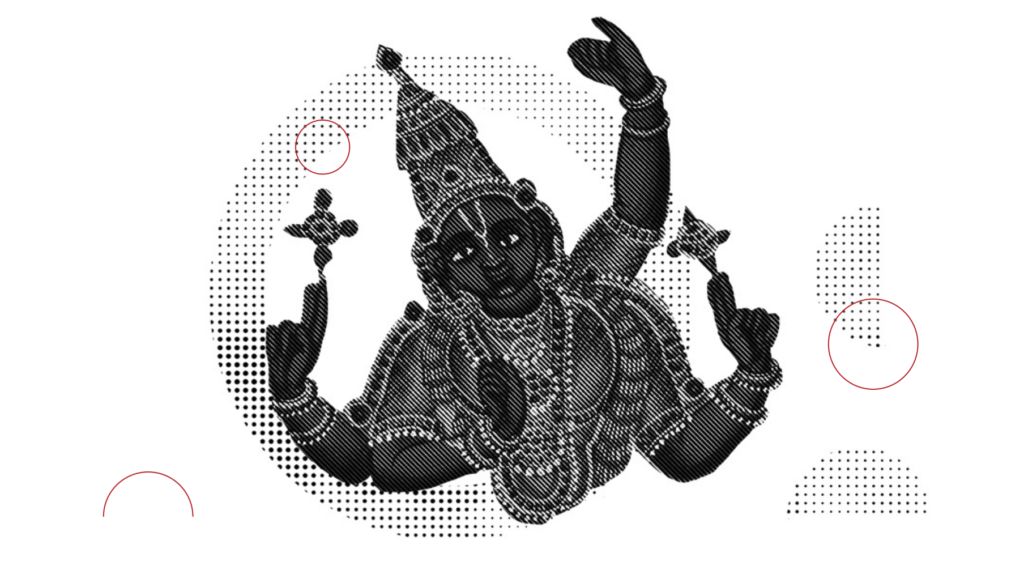 Smaraṇa  directly translates as “remembrance.”  For many schools of bhakti, especially those informed by literature like Bhagavad-Gītā and Śrīmad-Bhāgavatam, (or the “Bhāgavat School”) remembering the Godhead at the time of death is the ultimate fruit of a successful human life:

The highest perfection of human life achieved either by complete knowledge of matter and spirit (sāṃkhya), by practice of aṣṭāṅga-yoga (yogābhyām), or perfect discharge of occupation duty (sva-dharma-pariniṣṭhaya), is remembrance (smṛti) of Nārāyaṇa at the end of life.1

In Bhagavad-Gītā [BG], which is one of the “three foundations” (prasthānatrayī)2 of sacred literature (śāstra) informing traditional Vedāntic thought, Arjuna enquires from Kṛṣṇa, “[How] are disciplined souls to know You at the time of passing [from this world]?”3 In answering this question, Kṛṣṇa first responds by saying that one who remembers Him at the time of death attains a nature like His own (mad-bhāvam) (BG 8.5), a nature which He will later describe as being transcendental to the creation and dissolution of the material worlds (BG14.2).  This echoes an earlier declaration of Kṛṣṇa’s wherein liberation from the death-rebirth cycle (saṁsāra) was said to be the fruit of one who knows the true nature of His appearances and activities (4.9) and that many had attained a nature like his own (mad-bhāvam), by taking shelter of Him and giving up attachment, fear, and anger (BG 4.10).

After establishing how He could be known when passing from this world, Kṛṣṇa, giving the surefire means by which one may actually choose their next destination post-death, declares the following:

Indeed, one surely attains the very state that one remembers while quitting the body, Kaunteya, whatever it may be; for one has always caused that state of being to be.4

The idea here is, “The thought that occupies the mind while dying, is that which determines the state attained after death. The final thought arises only with reference to objects [and experiences] that were previously the most frequently contemplated during one’s life.”5 In light of the idea that our thoughts determine our destiny, Kṛṣṇa then provides the means to end this birth-death cycle and finally attain a purely spiritual destination:

Therefore, at all times remember Me and fight. With reason and mind focused on Me, you will doubtlessly come to Me alone. 6

Thus, this practice of remembrance is not only intended to be static in the literal sense of sitting down motionless in a peaceful place for meditation; it is dynamic, i.e. intended to be practiced incessantly, especially when enduring life’s vicissitudes.

Over and above this, for the Bhāgavata school, smaraṇa is not only a practice intended for liberation, but is itself (in its highest state) the ripened fruit of all attainment, an enlightened state of transphenomenal bliss (or ānanda). This follows a common idea in the Bhāgavata school that bhakti is both the means and the goal, the practice and the attainment, or, in charming words, bhakti is its own reward. This is powerfully indicated by the many prayers of liberated bhāktas in the sacred text who pray only for remembrance even while in the midst of life’s most troubling circumstances. A most profound set of examples in this regard are the prayers of Queen Kunti, the mother of Arjuna and a most elevated saint. She first lists the persecutions she and her family endured throughout their lives:

O Hṛṣīkeśa, master of the senses and Lord of lords, You have released Your mother, Devakī, who was long imprisoned and distressed by the envious King Kaṁsa, and me and my children from a series of constant dangers. My dear Kṛṣṇa, Your Lordship has protected us from a poisoned cake, from a great fire, from cannibals, from the vicious assembly, from sufferings during our exile in the forest and from the battle where great generals fought. And now You have saved us from the weapon of Aśvatthāmā.7

She then prays for a benediction:

I wish that all those calamities would happen again and again so that we could see You again and again, for seeing You means that we will no longer see repeated births and deaths.8

This “seeing” of Kṛṣṇa (darśanam) which stops one from again seeing the cycle of birth and death (apunar bhava-darśanam) is the same as remembrance according to commentators from the Bhāgavata school, such as A.C. Bhaktivedanta:9

For a pious person, if there is some calamity there is no other alternative than to take shelter of the lotus feet of the Lord. Constantly remembering the lotus feet of the Lord means preparing for liberation from birth and death. Therefore, even though there are so-called calamities, they are welcome because they give us an opportunity to remember the Lord, which means liberation.10

Another example is given to clarify that liberation is not the goal of remembrance for the devotee but rather, remembrance is its own reward, being itself a state of transcendental bliss:

O Lord Hari, it is not to be saved from the dualities of material existence or the grim tribulations of the Kumbhīpāka hell that I pray to Your lotus feet. Nor is my purpose to enjoy the soft-skinned beautiful women who reside in the gardens of heaven. I pray to Your lotus feet only so that I may remember You alone in the core of my heart, birth after birth.11

May all souls find refuge in the remembrance of the Godhead!