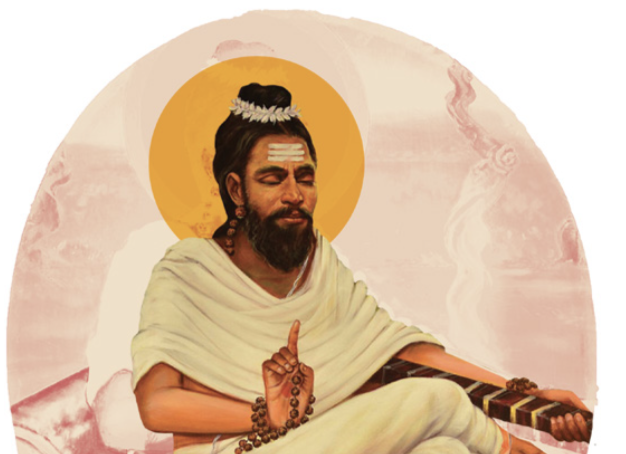 Abhinavagupta (fl. 975-1025) is an enigmatic figure, not because he tells us so little about himself, but because he tells us so much.1 The autobiographical vignettes scattered across his texts are a natural point of departure to introduce Abhinavagupta, especially when we consider their rhetorical power. To understand the latter requires placing Abhinavagupta within the lineaments of the world in which he flourished—the prodigious religious, intellectual, and literary cultures of medieval Kashmir. This is a region of India, Abhinavagupta tells us, where “everyone is either a poet or a scholar, where even the warriors are eloquent, and urbane ladies, whose gait is gentle, possess a moon-like radiance.”2

While the unique context of medieval Kashmir is vital to understanding Abhinavagupta, a tabulation of historical conditions and textual sources that informed his teachings in no way exhausts the significance of his contributions. Even while synthesizing multiple scriptural traditions centered on the deity Śiva or various Goddesses into an inclusive whole (one of his fortés), novel religious visions materialize. Many who have attempted to summit the peaks of his textual corpus, skirted with thickets of esoteric scriptural interpretation, prominent cliffs of theoretical disputations on aesthetics, and jagged spires of philosophical analysis, have arrived at a similar conclusion. Abhinavagupta’s thought, while grounded in a vast array of received traditions, abounds with penetrating insights that are consistently fresh.

At the conclusion of what is arguably one of his earliest works, a commentary on the Bhagavadgītā, Abhinavagupta readily displays two stylistic features that will further develop in subsequent works, boldness and playfulness:3

The divine Śakti is ever-new (abhinava) by nature and the deity Śiva is concealed (gupta) by Her. Therefore, I venerate that auspicious reality that is the union of these two—Abhinavagupta.

Abhinavagupta wrote in a non-dual tantric tradition devoted to the deity Śiva and retinues of divine powers, in which the individual initiate is meant to continually deepen their identity with Śiva (the divine light of consciousness) who discloses the universe through Śakti (Śiva’s creative power of self-awareness). Therefore, this artful identification of his own name with Śakti (abhinava) and Śiva (gupta), who are united in him, is a legitimate move, doctrinally, but striking nonetheless.

Whence such an exalted self-awareness? Abhinavagupta’s autobiographical excerpts reveal a consummate life that unfolded through a stunning concordance of ideal conditions. His patrilineal descent, traced from a distant ancestor Atrigupta to his father Narasiṃhagupta, charts a genealogy of tremendous erudition and devotion to Śiva. One of his signature benedictory verses suggests the extraordinary circumstance of his very conception: the union of his parents in an esoteric sexual rite. In a passage that examines this ritual, Abhinavagupta notes that the “body of one conceived in such a union is the receptacle of enlightenment even before birth.”4 Thus we might say that his calling as an accomplished spiritual master was prenatal. Abhinavagupta also tells us that in his early childhood years his mother was “suddenly torn away from him.” In describing this tragic event, however, he immediately reframes her untimely death: the loss of a mother— one of life’s deepest attachments—created the space to fully pursue his eminent destiny, the realization of embodied liberation.

Abhinavagupta describes the path to that goal, and the training that prepared him to assume the role of a Śaiva guru, as meandering. He details numerous educational detours pursued out of an unbridled passion for learning:

After being initiated into the abyss of grammar by my father, my mind was cleansed of impurity by the spray of waves from the ocean of philosophical reasoning. Then while engaged in the pleasure of intense aesthetic emotion from reading poetry, I was seized by an intoxicating devotion to Śiva that spontaneously caught hold of me.5

Beginning with the study of grammar and rational inquiry, then becoming engrossed in belles-lettres, Abhinavagupta describes himself being suddenly enveloped by a deep devotion to Śiva. In the verses that follow he mentions nurturing this devotion through discipleship to fifteen teachers. The most important of the list is Śambhunātha, the teacher whom Abhinavagutpa credits as the source of his ultimate fulfillment, the full-flowering of awakened insight.

In another string of verses, Abhinavagupta poetically depicts his own mind as a bee intoxicated by the fragrance of countless blossoms, representing the myriad knowledge systems he encountered in Kashmir. In the end, the bee-mind of Abhinavagupta finally alights on the lotus of non-dual Śaiva philosophy, the only flower capable of extinguishing its rapacious desire for novel fragrances. In this case as well, the irruption of devotion to Śiva is presented as the final destination following a phase of literary and intellectual promiscuity. Abhinavagupta’s depiction of his own wide-ranging education offers a tantalizing window into his life. It also serves a didactic purpose by signaling a cosmopolitan educational ideal to be reenacted by future Śaiva aspirants enamored of knowledge. Whatever the historical veracity of this exact order of study, each area of cultivation (scholastic training, poetry, and Śaivism) corresponds to the main genres in which Abhinavagupta authored his texts.

In addition to the references of studying grammar with his father and his foray into the ocean of reasoning, Abhinavagupta’s philosophical writing provides ample evidence of his considerable scholastic prowess. The Sanskrit disciplines of grammar (pada), logic (pramāṇa), and scriptural exegesis (vākya) form something of a classical trivium of Sanskrit scholarship.6 Abhinavagupta depicts his study of these infamously technical text traditions as a matter of blissful enjoyment.7 This particular domain of expertise is vividly on display in his commentaries on the philosophical work of his grand guru Utpaladeva, Stanzas on the Recognition of Śiva. This is a text that rationally establishes the tenets of Śaiva revelatory teachings in the non-sectarian discourse of debate. The main opponent of Utpaladeva’s treatise are the Buddhists. Abhinavagupta’s commentaries not only showcase a masterful command of the details of Buddhist philosophy, but even track the subtle shifts in various Buddhist positions across the texts of Vasubandhu, Diṅnāga, Dharmakīrti, Dharmottara, and others. Demonstrating the sensitivity of an intellectual historian, Abhinavagupta registers how Buddhist philosophical views change through time.8

In the realm of aesthetics, there is no question that Abhinavagupta was a serious student of classical Sanskrit literature and theater. His celebrated and influential works on poetics (Dhvanyālokalocana) and dramatic theory (Abhinavabhāratī)each include references to a tremendous range of poems and dramas in both Sanskrit and Prakrit. Even more compelling than his encyclopedic knowledge of courtly literature and plays—to which we can add a historically-sensitive expertise on past theorists—is his rare gift as a critic. Abhinavagupta’s literary analysis illuminates striking beauty and layers of suggested meanings in each verse or theatrical scene he expounds. And yet another brilliancy deserves mention: “Abhinava’s phenomenological descriptions of the transformation of the viewer’s awareness through the magic of drama as it unfolds step by step offers some of the most penetrating accounts of aesthetic psychology available anywhere.”9 Clearly his immersion in poetry was more than just a fleeting diversion in an ineluctable journey towards Śaiva religious philosophy.

Abhinavagupta was also regarded as a Siddha guru, a perfected master writing in a non-dual Śaiva tradition in which the direct inner intuition of revelatory teachings was an essential criterion for teacherly authority. The goal of this non-dual tradition, with which Abhinavagupta identifies, is as an all-encompassing Self, an awareness of ‘I’ that is not unique or exclusively related to an individual personality fixed within history. This universal Self is the inherent dynamism of a consciousness that generates the theatrical display of the universe and continually relishes each scene in wonder and bliss. Abhinavagupta nudges his audience towards the liberating insight that we too are the unbounded freedom and creative imagination at the heart of all reality, if we can only learn to recognize this ever-present truth, hidden in plain sight.

Taking into account the depth of expertise and knowledge across these three domains, we might characterize Abhinavagupta as a cosmopolitan Siddha; an intellectual giant and visionary whose thought continues to dazzle and intrigue scholars and practitioners more than a millennium after his birth. His corpus of texts leaves us with many generative questions. What is the relationship between art, philosophy, and religion? What is the role of rational deliberation in spiritual liberation? Is there a clear relationship between Abhinavagupta’s non-dual Śaiva view and his theory of aesthetics?10 And there is one aporia, which is particularly vexing, that emerges from this brief and partial resumé of this great polymath of medieval Kashmir: how can we reconcile the many ways Abhinavagupta represents his own self? On the one hand, he is acutely aware of his own place in history and he demonstrates that context matters. He narrates discrete details about his ancestry, childhood, education, liberation, and vocation; he speaks at great length about Kashmir, celebrating his homeland as a region of unparalleled beauty and cultural sophistication; and he views the intellectual landscapes he so robustly engaged with the eyes of an intellectual historian. On the other hand, he saw himself and all other beings as an all-pervasive consciousness that could not be reduced to any of these conditions or contexts: who we are, his teachings reveal, is so much more than the mind can conceive or biology, culture, and society can determine. So if we take this paradoxical self-understanding seriously, the aporia can be stated simply as “who is Abhinavagupta,” really?