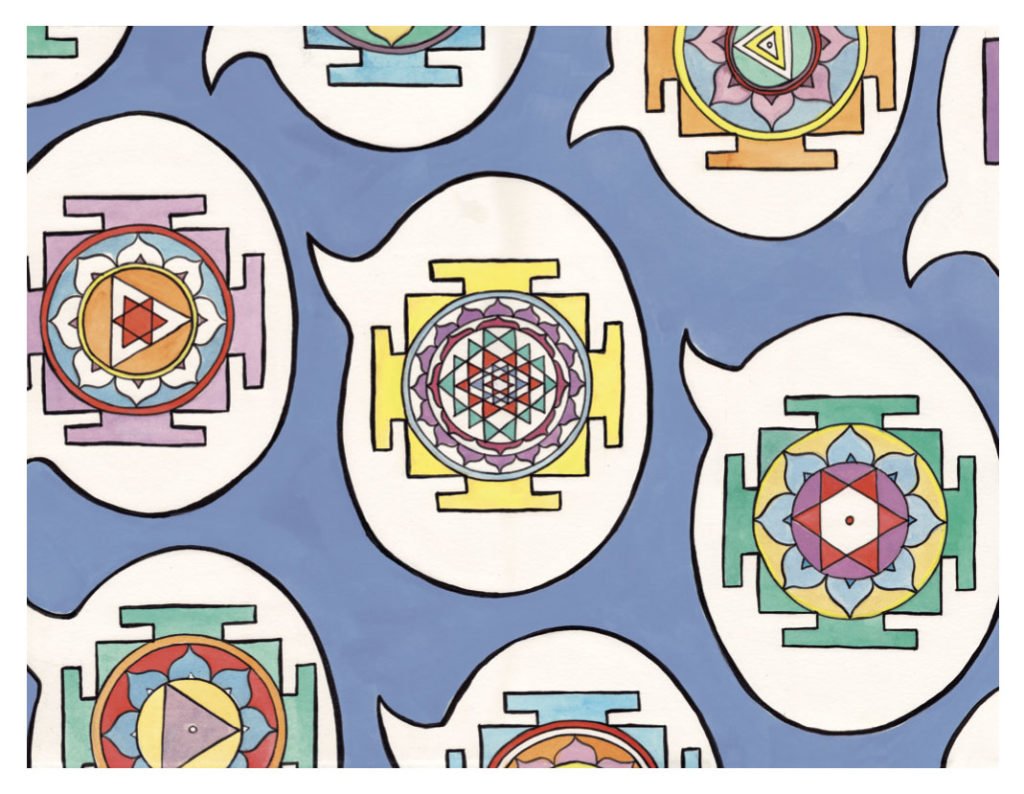 A yantra is a meditative ritual device used in South Asian Tantric traditions. It is a blueprint of energy of a specific field of consciousness. Although yantras are sometimes described as representing a deity, each yantra is more than a symbol.  A yantra is a literal matrix of divine consciousness. Yantras are an expression of consciousness in an abstract form that follows precise mathematical equations and ritual procedures in its design and construction.

Eastern philosophical traditions have ascribed countless names to express absolute consciousness (Brahman, Kali, Paramaśiva, Tripurāsundarī), yet this formless undifferentiated state ultimately cannot be defined outside of our direct experience. Yantras serve as a bridge between relative and absolute planes of reality.  A yantra gives access to the deity on the relative plane.  It is a kind of mesocosm between the microcosmic and macrocosmic planes.  A yantra can represent and express stages of involution, evolution, and preservation on subtle and gross planes. It also displays cycles of creation, maintenance, and destruction. Through visualization, meditation, mantra recitation, and pūjā (ritual), one can access and harness the energies in a yantra.

There are certain features commonly found in yantras although all may not be employed in every yantra. Specific shapes and lines are utilized and constructed into geometric forms made of different colors and materials for various ritual and spiritual purposes. They emit specific frequencies of energy and create distinct energetic patterns that can amplify, transform, or diminish certain powers. Common designs include: the bindu (dot or point), squares, circles, diagonal lines, triangles, lotus petals, crescent moon, pentagram, and other shapes from nature.

Seeing a yantra without knowing what it is or what energies it carries can have profound spiritual and psychological effects. One does not need to consciously focus on the yantra to benefit from its effects. Placing specific yantras in the home or workplace can promote harmony, peace, abundance or any desired effect that is congruent with the properties of that field of consciousness. Some yantras give healing benefits, while others bring protection and ward off negative energies.

In the classical Śrī Vidyā text, The Saundarya Laharī, Swami Satyasangananda Saraswati describes the importance and potency of yantras in traditional practice. He says, “Just as the radio receives sound waves, the yantra and mandala are efficient receptacles to attract and hold the energy that is gathered in the vicinity where mantras are chanted for any length of time.”2

Yantras are made out of different materials depending on their function or ritual purpose.  Yantras that are drawn on the ground are created with colored powders, flowers, herbs, and other natural materials. They are worshiped in a pūjā or for the duration of a specific ritual period then are destroyed at the end of the ritual.

Specific metals are prescribed to hold the energy that is being worshiped for longer periods of time.  Different metals hold certain properties that allow the energies in the yantra to remain active. Gold, silver, and copper are the three most recommended metals for this purpose. Metals like aluminum and iron are generally not recommended as the chemical properties of the metals are not congruent with the energies of the field and can have obstructive effects. Yantras are also drawn or painted on paper and natural materials, such as bark or leaves, used in a ritual and then disposed of, usually by submerging the yantra in water or by burning it.

Tantric Practitioners use different techniques to fulfill various functions in working with yantras. The goals differ depending on lineage and purpose. However, at the highest level, one is to identify fully and thereby merge with consciousness as it presents itself in this geometric form. When meditating on the yantra from the bindu outward, one is co-participating in a process of creation from the formless into form. Focusing from the outer square into the central bindu can express the dissolution of the manifest into the unmanifest. When a practitioner works with yantra, it can arouse certain energetic processes in their own energy field.  It can also help with the awakening and rising of kuṇḍalinī.

Yantras express the world that is created, sustained, and dissolved by the play and relationship of light and sound. As Swami Saraswati points out,

“The focal point of a yantra is always the bindu, which is the nucleus, representing the seed from which creation has sprung and into which it will return. In the scheme of evolution, according to Tantra and Samkhya,the interplay of nada, bindu, and kala gives rise to all creation. Bindu is the point from which a spandan or vibration. In the center of the Yantra, is the bindu, a condensed point of Consciousness out of which the universe evolves and into which it dissolves. Bindu is the point from which a spandan or vibration gives rise to nada, sound, and kala, waves and particles of light. Just as nada gives rise to mantras, kala, which emanates as rays of light, gives rise to yantra.”3