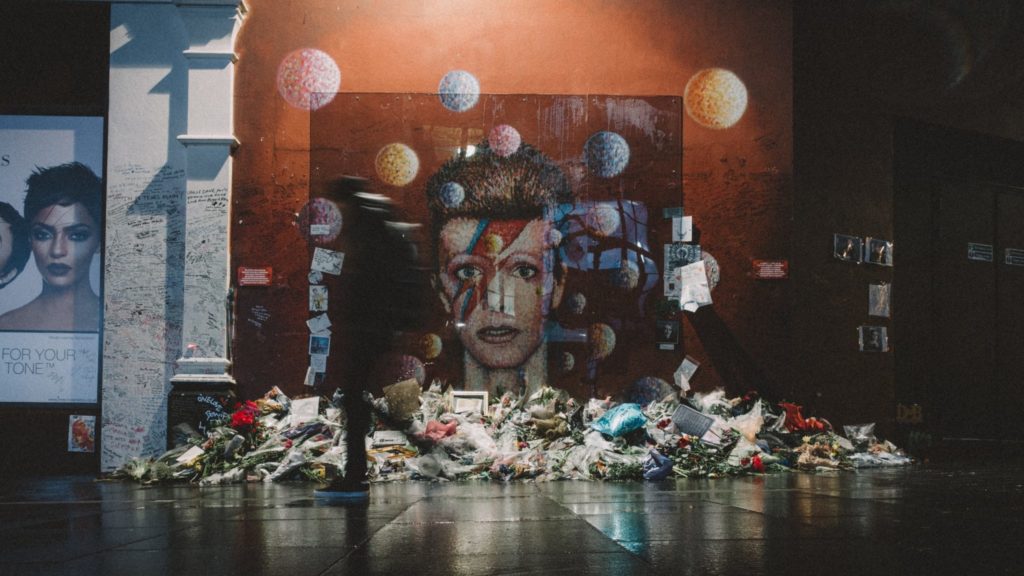 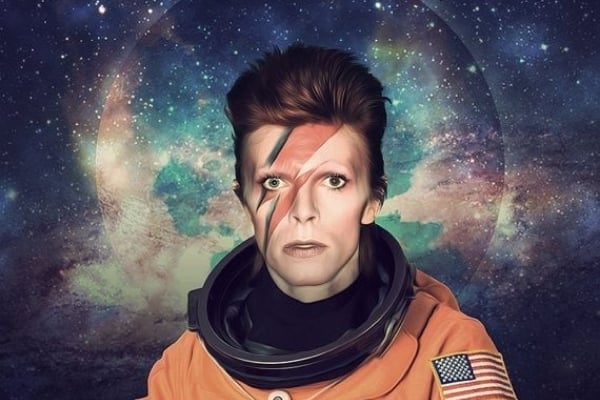 It’s believed yogis knew the time of their death. Their followers would gather around in prayer, devotion, and with ease and grace the last breath would come. People can be sinners or saints; David Bowie lies somewhere outside the fray. A flamboyant performer of boundless creativity, a private family man – it’s the dichotomy of early age decadence and later year maturity that keeps Bowie a captivating and impossible human with an immortal legacy in the music and art world.

Artist ‘til the end, on the deathbed altar of music, arguably some of his most influential work fifty years forward will be the Davie Jones blindfolded, black button-eyed amalgamated visions of dying and transcendence played out like eerie prophecy. Having spanned almost half a century career in music, fashion, film and even Broadway, Bowie embraced beauty in the odd, not the norm. He was fully embodied as an artist unfettered by change, embracing all that’s possible as a stage performer.

He also knew a thing or two about the klesha abhinivesa: fear of death or attachment to life. It would seem in his last working hours and days of life, he both labored to eulogize his own life and at the same time softly surrender to the inevitable end of it.  In his lyrics, the flesh was sloughed away. The body gone, to find him is to simply look up towards Heaven or down at your iPod Shuffle.

“Look up here; I’m in heaven.” he sings and levitates in the music video Lazarus, named after a man who Jesus brings back to life.

Bowie knew his battle with cancer was coming to a close. In spite of the physical pain cancer can cause,  a final album was born and a set of haunting videos document, like a gratifying end of a movie trilogy, all the loose ends of his masterful story telling in a magnum opus BlackStar. Even a flawed spirit can journey to the light, or the dark BlackStar as he identifies himself as he is transported to a blackened sun.

Ziggy Stardust and the Spiders from Mars was released about one year after I was born. I have a parent who remembers seeing David Bowie perform in full sartorial regalia, theatrics, luscious and often head scratching androgyny as Ziggy Stardust co-opting personae like a tight fit leather glove. He defied every stereotype, broke boundaries in his music, and enticed with one steady look of those blue cat eyes. He was not without controversy, or moments of egregious character flaws. He dies imperfect, a fragile little bluebird of which he sings, but that doesn’t mean he doesn’t die leaving an indelible mark.

My father was a musician and Bowie’s evolution as an artist served as road markers, milestones through the awkward transitions in my life. When things were new and emerging and imagination had yet to be squashed and dreams could bloom big, there was Bowie as Hunky Dorey, Ziggy, and Aladdin Sane. My father made me watch The Man Who Fell to Earth and I thought, what/who is this? I had no conceptualization at that age, but I could recognize innovation. In fact, it’s one of my first memories of something fantastically original in that sort of change is scary, what does this mean, sort of way.

When coming into my sexuality, my sense of desire and connection, when men started being less like vinegar and before my eyes sweetened like honey, there was Bowie punctuating clubs with “Let’s Dance” and “Blue Jean”. As I grew up and learned heartbreak and loss, Bowie sullenly nuanced contemplations of loneliness with a gentleness in Hours and “Thursday’s Child”.

In pain, weak in body but invincible in spirit, Bowie electrified the last seventy two hours with a glowing example of what it is like to live comfortably with change, to adapt gracefully, and how to reap abundance in the journey at the time when the dim lit candle of life moves to fade. He didn’t just sense his time of death, he commanded his own curtain call with one last grasp at artistic immortality. In the last hours of his death, he tied up all the loose ends left from personae’s past, he encouraged in his cutting edge final video “Blackstar” for us to signal Major Tom and led us to the holy mound of Golgotha in the grotesqueries of the body ruminating the blunt truth of dying. And in “Lazarus” the closing chapter of the Man Who Fell to Earth finally free.