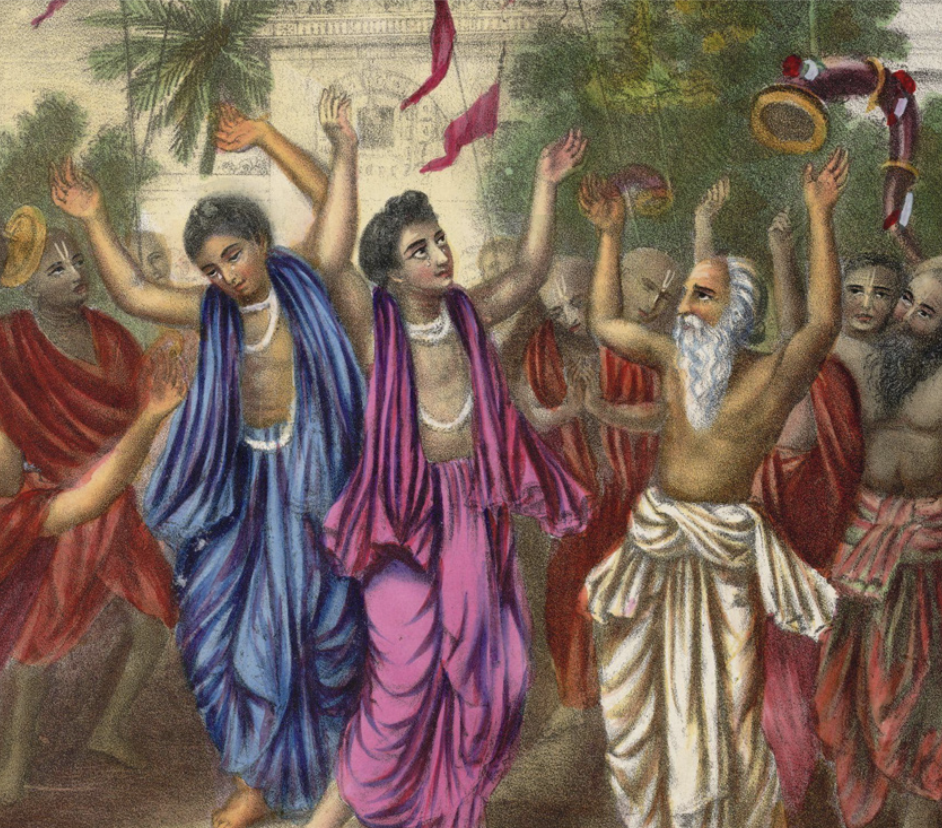 You’ve probably heard that bhakti is devotion or love. Though that’s correct, neither word completely conveys what bhakti is. Consider these questions: If you’re fully devoted to – even obsessed with – your Olympic training, your dance, basketball, or other sport, your music, art, or work, are you engaged in bhakti? If you love and serve your children, partner, community, or nation, do you have bhakti?

How and why bhakti is beyond the ordinary?

Bhakti is a discipline, a yoga, not simply a noun meaning devotion. It is a spiritual path of careful design meant to allow us to control the mind, efface the false ego, gain release from the cycle of birth and death, and realize the self and the Supreme. In short, it’s a serious practice promising freedom from the confines of our suffering and giving us ultimate refuge in the homeland of consciousness.

By studying Bhagavad-gītā and the Bhāgavata Purāṇa it was with interest that I learned that bhakti can manifest only when reposed in the perfect object of affection. I learned that for my selfless giving to become a fully satisfying receiving, the object of my affection must be able to reciprocate all my love. Love, after all, is measured by how it is reciprocated. As my love increases, the other person’s love for me must also increase; otherwise love is thwarted. The only person capable of unfailing love and unmatched reciprocation is the supreme being. Therefore, bhakti is possible only when our beloved is the supreme transcendent person.

The word bhakti comes from the Sanskrit root bhaj, “to give and receive.” The sixteenth-century poet and saint Rūpa Gosvāmī, a disciple of Śrī Caitanya, wrote that the highest category of bhakti is that which exclusively pleases Bhagavan Krishna and is devoid of any desire apart from pleasing him. It is not covered by karma (the action of daily or customary duties), jñāna (the knowledge that searches for the nonpersonal aspect of the Absolute,) or the meditational attempt to become one with the Supreme.

To define the characteristics of pure bhakti, Rūpa Gosvāmī uses words and phrases like “friendly,” “favorable,” “without selfish desires or ulterior motives,” and “perpetual, ardent endeavor.” Love as bhakti is friendly, unselfish, unmotivated, and constant. These sentiments and the actions they give rise to, when expressed in relation to the supreme person, transform into resolute, eternal spiritual emotions and uncover our true nature as a unit of consciousness distinct from matter.

Bhakti–yoga is the primary subject of Bhagavad-gītā and the Bhāgavata Purāṇa, which according to the sage Vyāsa, who compiled the Vedantic corpus, presents the essence of Vedānta philosophy and theology. Corroborating the teachings of the bhakti literature, saints, seers, and mystics have for millennia attested to bhakti as the highest goal of consciousness/self.

Rūpa Gosvāmī wrote the definitive manual on bhakti practice, experience, and ecstasy, called Bhakti-rasāmṛta-sindhu, “the nectar ocean of bhakti-rasa.” Rasa means the agreeable taste or flavor of an emotion. The subject of bhakti-rasa deals with the aesthetics of spiritual feeling. Those who have prema-bhakti, the highest stage of bhakti, where love is a state of being, relish the deepest rasa.

With copious citations from the Vedic literature and authorities in the tradition, Rūpa Gosvāmī reveals a world where all talk is singing, walking is dancing, forms are made of condensed love, and every moment unveils new and fresh intimacy with our source, who is a consummate lover, ever ready to give of himself.

As prema-bhakti is not a worldly love, it is difficult to put into words. But in Bhakti- rasāmṛta-sindhu, Rūpa Gosvāmī, himself a consummate taster of the ecstatic prema-rasa, has done an unmatched job of conveying its essence. His readers will swim in the deep, broad ocean of bhakti, immersed in stunning details of the trans-temporal, trans-spatial realm of consciousness where perfected beings happily reside – and where we too can reside when we learn to give our heart fully to the Supreme.

I think of bhakti as the path of heartfulness, as a practice that harmonizes the head and the heart. While mindfulness grants peace, it cannot fully satisfy us because we’re more than mental, or psychological, beings. At our core, we’re feeling beings. With herculean effort we can try (unsuccessfully) to extinguish feelings by mind control. Alternatively, and more naturally, we can engage our feelings in our spiritual pursuit of happiness. Bhakti employs all our humanness. The difference between a bhakti life and a mundane one is that in bhakti we affectionately place the Supreme, our source and shelter, at the center of our lives.

Bhakti practice engages us at once in perfect and simple actions despite our shortcomings.

The yoga of love guides us in a daily practice that can give rise to the fullest expression of unmatched love, prema. While our Divine Other is the primary object of our affection, our love project will embrace all living beings and the earth. In other words, when bhakti manifests in the heart, we will embody love and compassion for all others. Only bhakti can deliver the coveted genuine universal brotherhood desired by mystics.

The bhakti process is easy, effective, and powerful.

The main aṅga, or limb, of bhakti practice is kirtan. The word derives from the Sanskrit kīrti, which means to “praise, glorify, celebrate.” This loving appreciation can be expressed variously.

One type of kirtan is group call-and-response singing, a practice that has become popular in the yoga community, having been borrowed by other yoga paths, even though kirtan is not a limb of these paths. Such is kirtan’s enjoyable nature.

Another type of kirtan is japa, or individual chanting of the mahā-mantra on a mālā, a string of 108 beads. Reading sacred bhakti texts is also kirtan, as is watching a devotional play or film about Śrī Krishna. In other words, kirtan is a broad category that encompasses singing, private chanting, reading, writing, studying, art, drama, and speaking or hearing about Krishna — all activities that will bring about devotional remembrance (dhyāna) and ultimately samādhi.

Another primary limb of bhakti is sadhu-saṅga, or keeping company with spiritual people, especially one’s guru and co-practitioners. Such saṅga nurture’s our intellect, our practice, and our hearts. We all need community. For success and happiness in any endeavor, we must choose our company wisely to support our ideals and goals. This is especially true in bhakti practice. We need the company of like minded people to withstand the powerful waves of the material energy and clear away the negative habits and inclinations we’ve accumulated over many, many lifetimes.

Bhagavad-gītā teaches us that what is real is spiritual and exists eternally. If our bhakti is truly bhakti, we won’t engage in it today and give it up later. Bhakti begets bhakti and is ever-increasing in joyful intensity. Such is the nature of spirit. Temporary “bhakti” taken up to attain something other than more bhakti is impure and cannot give prema, the goal of bhakti. Genuine lovers can never leave each other.

Love and praise are real when accompanied by action.

Love includes service. A man may bring flowers to his beloved, cook her a special meal, clean her house, weed her garden, take a walk with her, hold her hand, and reveal what’s on his mind. We can serve the supreme transcendence in as many ways as we serve our loved ones now.

Whether it be recreation, work, family responsibilities, social obligations, or community service, we infuse bhakti into our life by doing only things that support our bhakti goal, that aim to please the Supreme, and that help us remember that we are a unit of spirit and are here not for our own gratification but to be of service. Work and relationships can mold us in ways that aren’t accomplished by sitting in kirtan and meditation.

Unfailing love is within our reach.

Chanting the mahā-mantra – Hare Krishna, Hare Krishna, Krishna Krishna, Hare Hare/ Hare Rama, Hare Rama, Rama Rama, Hare Hare – in kirtan and japa reveals that in our natural, perfect state we are lovers because we come into direct contact with our Source. The nature of spirit is that the name and the named are nondifferent. Bhakti practices invoke the love where the melding of hearts is complete, where we experience inseparable supreme union with our Beloved and the highest ecstasy of the self.