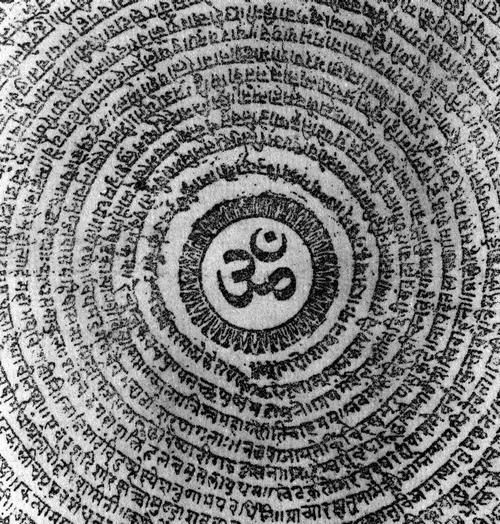 One who chants Om, which is the closest form of Brahman, approaches Brahman. This liberates one from the fear of the material world.
~ Rig Veda, circa 1500 BC

Rare is the yogic text or scripture that does not extoll Om as a method of Self realization. You will find there that Om is sometimes referred to with synonyms, such as “Pranava” – sound of the prana; “Udgita” – uprising song; “Shabda” – primordial word; or “Nada” – subtle sound. These readings indicate that Om itself is a universal teacher of the enlightened state.

In the first chapter of the Yoga Sutras, Patanjali reveals:

“Ishwara is that supreme person untouched by karma, afflictions or desires.
Being unlimited by time, that is the guru of the ancients. The name of That is OM. The repetition of Om leads to realization of its meaning. From that comes the attainment of consciousness and the disappearance of the blocks”. (I:24-I:29)

I love how he puts it: “Repetition of Om leads to realization of its meaning.” So, there’s no need to talk or to write about it, to get a tattoo of it on your body, or to wear the symbol around your neck – just do it! Om accomplishes the clarification of “citta” (mind stuff), which is the goal of yoga according to Patanjali. But you’d be surprised how hard it can be to persuade people in a yoga class to open their mouths and sound the sound – it’s as if it’s beneath their dignity. We who happily waste our breath, talking every kind of shite all day long, don’t hesitate to draw the line when it comes to Om.

Chanting Om and listening within for it is a gateway to inner silence. There are ‘white noise’ machines that work on this principle, amalgamating ambient noise so a person can get quietude for a nights sleep. Om works in a similar fashion to blur the specific phonemes arising as inner chatter, deconstructing that stream of verbiage referred to as “discursive thought.” Ask anyone who has attempted to meditate and been disappointed, and you will inevitably hear, “I couldn’t get my mind to be quiet.” Om remedies this universal condition.

It is not only chanting the sound which is encouraged by the sages but also, more subtly, listening for it, hearing it and feeling it. The practice of hatha yoga asana sensitizes the nervous system and brain to perceive this subtle vibration. Just as the balanced construction of a tuning fork, when struck, creates precise resonance with a specific note, the equivalent bilateral symmetry of hatha practice allows a person to tune in to her own distinctive tone, and to sense a harmonious connection to the surrounding ocean of vibration.

Svatmarama’s Hatha Yoga Pradipika, (15C) our most authoritative text on hatha yoga, weighs in on the subject of Om, there called Nada, extensively. To take a small sample:

“One who desires the kingdom of Yoga should abandon all mental activity and, with an attentive mind, concentrate on Nada alone…Concentration on Nada corrals the horse of the yogis mind. Therefore the yogi should attend to it every day… Upon hearing Nada, the snake of the mind quickly forgets everything and doesn’t slither anywhere. Unequaled, unutterable bliss grows in the hearts of yogis experiencing samadhi by concentrating on Nada. Only a great guru knows this.”
(Akers translation)

The 72,000 channels said to be purified by hatha yoga are called “nadis”, implying that our subtle energy body consists of these many currents of Nada flowing more or less freely. The purpose of hatha yoga is to dispel obstructions within these channels so that we may resonate with our “svarupa” – our true nature which is infinite. Om creates a sonogram effect, revealing continuity with the cosmos. It is like relaxing on a bed of eternity, and you understand the true meaning of the term “kaivalya” – supremely alone.

The Vijnana Bhairava Tantra (dharana 15) has this to say:

“One who is deeply bathed or steeped in Nada, which is Brahman vibrating inside in the form of sound (Shabdabrahman), which can only be heard by the ear that becomes competent by yoga, and which goes on sounding uninterruptedly like a rushing river, attains to Brahman.”

The tantric path has a whole school devoted primarily to the apprehension of vibration, calling it “Spanda.” The word tantra comes from the Sanskrit root “tan”meaning “to extend”, and what is extended is the practitioner’s sense of identity to encompass the limitless reality beyond the body. Tantric skills empower us to go beyond egoic dichotomizing thought processes to the awakened cognition of non-dual awareness.

The text known as the Spanda Karika speaks of vibration as a lamp that illuminates the boundlessness of the soul. The masters of the Spanda school, who possibly anticipated the physics of string theory, discerned in deep meditation this most subtle vibration, sometimes described as a tremor, a throb or a sparkling, as the ultimate ground of being. More, they claimed that contemplation of Spanda results in ego annihilation and in visceral recognition of oneness with the universe. It is strange that “oneness with the universe” is such a big deal – after all, what else could we be? But nevertheless, it is an ecstatic intuitive feeling characteristic of samadhi, aka the pearl of great price, liberation, and the nectar of immortality. My Guru used to say: “God is an extraordinary feeling”.

We can easily range beyond yoga into the world’s mystical literature to find the appreciation of sound, simple sonic awareness, as a vehicle to enlightenment. The Shema prayer that is central to Judaism is concise and comprehensive:

“Hear, O Israel, the Lord thy God, the Lord is One”

If you really take that in, it is a command to listen deeply. And if we do, what will we hear? When we meditate and pray, gradually stilling the surface noise of the mind, we are entering more deeply into the etheric body, creating space to receive the Shabdabrahman. Often after a parable describing the state of mind he called “kingdom of heaven”, Jesus would finish with “He who has ears to hear, let him hear,” hinting that not everyone present was capable of being penetrated by the deeper essence of his teachings. We do yoga practices and meditate to make ourselves permeable to the serenely omnipresent light of truth. Chanting Om or listening acutely to it’s delicately pervasive reverberations sends the luminosity of non-dual consciousness, which is the true bread of life, into the cells of the body and brain. How easy is that? How free of charge and accessible!

Guru Nanak, (1469-1539) the spiritual head of the Sikh tradition, when asked who his teacher was, would reply that his Guru was the Shabda. There is a curious corroborating verse (10) in the Guru Gita text from the Skanda Purana:

“Maya, the deluding power of differentiation, is founded in the body. That by which truth arises is known as the Gurushabda.”

This means it is the design of the body itself which propagates dualism, the view of our separate identity also known as the ego. The omnipresent Gurushabda is like the isotropic background radiation found to be the reverberation of the Big Bang. What we pride our scientific selves on calling “Big Bang,” is in Biblical tradition referred to as “the Word” which initiated creation. The sound still ringing from the Big Bang is isotropic, meaning evenly distributed through space/time. Thus this vibration saturates equally both conscious and inert matter, the animate and the inanimate. With yoga we reunite that split. One important way this occurs is through pranayama – breath technique. Acute and reverent focus on the breath can refine perceptual attention sufficiently to intuit the Pranava. The Om chant is simply voiced pranayama.

Like the light in the crown chakra, which although ‘brighter than a thousand suns’ doesn’t hurt the eyes, the inner sound of Om can be so pervasively loud that you know the whole world is hearing it, but it doesn’t hurt the ears. Om can sound like a trumpet blast, resembling the sound of the shofar. Everything in creation from the infinitesimal quanta to the astronomic, is pulsating, and the vibration is making sound we usually don’t hear because of its ubiquity. We are made of it. Composed of it. Or, as Madge the manicurist in the Palmolive commercial put it, “You’re soaking in it now.”

If we posit Om as a distinct and discernible form of Divine consciousness, we should feel when we chant this sound we are sending God through our bodily instrument. When doing spiritual practices, the adjustment of attitude to the focused mood of authentic love is a critical ingredient. The appropriate attitude to assume when chanting Om is that we are touching God, the absolute principle of reality. That understanding instantly elevates your experience, creating a visceral sense of ascent. Then pure unconditional love is easily attained in the equilibrating vibration of Om as it carves cascades of ambrosia through vessel of the heart.

When chanting the Udgita, the champagne-like prana bubbles upward though the central channel, and, as Patanjali says, it removes limiting obstructions, gently dissolving the contracted tension within the 50 alphabetized petals of the chakras, causing them to tremble and shimmer in bliss. Soon you will hear your soul singing and from that listening, you will enter profound and perfect silence.

This article was originally published on Mary’s website, meditationmary.com.