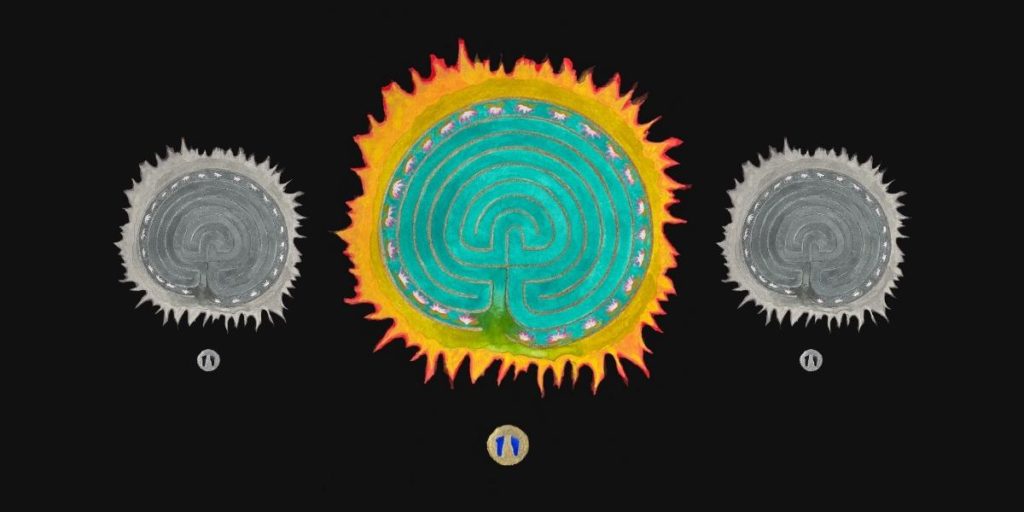 In the spring semester of 2020, I taught a seminar on the Bhagavad Gītā, aimed at a close reading of it with particular focus on its progression of ideas and sentiments, and the (assumed) logic of its progression of chapters and in Kṛṣṇa’s teaching. The instruction of Arjuna by Kṛṣṇa is a compelling yet problematic phenomenon. It is problematic because it is hard at times to figure out why the chapters follow one another in the order they do, or even the ślokas within any given chapter. There is a spectacular climax at Gītā 11, a vision of Kṛṣṇa in his totality; and yet seven more chapters, more than a third of the Gītā. are still to come. Couldn’t the Gītā, short as it is, be a good bit shorter? The course was about detecting the deep logic of it, such as would become clear when it is read closely. The point of the seminar was to draw students into understanding the Gītā — as far as one can in thirteen 2.5 hour classes — in translation (Georg Feuerstein’s, with others recommended; with the Sanskrit encouraged for those who could read it), with some sense of original context (using Gajanana Khair’s Quest for the Original Gītā, and Angelika Malinar’s The Bhagavad Gītā: Doctrines and Contexts) and of how the Gītā has been used over the centuries (recommending Richard Davis’s The Bhagavad Gītā: A Biography).

I was delighted to read the Gītā with a very interesting group of students, including doctoral students with considerable background in the study of Hinduism, Masters level students with various degrees of knowledge of the Gītā, of yoga, and several students with no background on India, but background in other fields of theology, religious studies — plus, remarkably, three Hindu monastics visiting Harvard for the year, and a few very interesting auditors from around the university. As a bonus, my teaching fellow had considerable expertise on Hinduism, but also on philosophical and mystical traditions of Islam.

My hope was that every student would learn from and be challenged by the Gītā in a perfectly respectable academic fashion, yet without replacing study of the text by discussions of larger theoretical issues. We might for instance discuss in general terms the warrior ethic, caste, nonviolence, the self, divine descent (avatāra), and the Hindu understanding of deity, and these are all worthy topics. But it requires some discipline to focus really on just what the Gītā does and does not say on such matters. Moreover, my still greater goal was to make it possible (though students will have the final choice) for students to be engaged by the truth of the Gītā, intellectual clarity leading to transformed ways of looking at the world and at self – and, inevitably, to make possible for those who wished to pursue the possibility – encounter with Kṛṣṇa, the teacher, whose teaching is tied in with his own identity.

The seminar was distinguished particularly by its other element: reading the Gītā with the great commentary, the Guḍhārthadīpikā of Madhusūdana Sarasvati (1540-1647), the Advaita scholar, author of the Advaita Siddhi and Siddhānta Bindu, who was remarkably also the author of works on bhakti, such as a commentary on the opening of the Vaiṣṇava Bhāgavata Purāṇa and the Bhagavad Bhakti Rasāyana, a work seeking out the very essence of bhakti. Madhusūdana was convinced that every chapter, every śloka, and indeed every word has its place, and is part of the necessary teaching of Arjuna – who is neither mired in the world and unteachable nor already possessed of transformative knowledge such as would have already placed him beyond sorrow – that will lead him from his state of grief and confusion to a steadiness of self that will enable him to act without attachment and slowly gain clarity about himself and the world, the Self, and Kṛṣṇa.

Madhusūdana says that he wrote the commentary not to improve on the interpretation of the revered Śaṅkara (800 years before) but for his own benefit, his own pleasure in reading and trying to understand every word. That he was a man with deep affinity for Gauḍiya Vaiṣṇavism is shown in the fact that he afforded Kṛṣṇa a notable centrality in the Gītā, highlighting the thrill and sweetness of devotion even when the verses at hand did not require him to do so; any number of times elaborates on the beauty and sweetness of Kṛṣṇa in lavish detail. He is a scholar of heightened spiritual sensitivity, and a teacher who believes that his writing will draw in his readers, Advaitins to respect the fullness of the Gītā, and devotees to respect the power of Advaita. He has at his fingertips a massive array of literature: Veda and Upaniṣads, Brāhmaṇas, Dharmaśāstra, Mīmāṃsa Sūtras and Yoga Sūtras, small works of Śaṅkara, the Viṣṇu and Bhāgavata Purāṇas, Vaiṣṇava devotional hymns, and even, once at least, a verse from Kalidāsa’s Raghuvaṃśa.

But he was not merely dazzling his readers by scholarly prowess. Again and again, Madhusūdana employed the Gītā’s language of detachment and detached action, sacrificial action, the yogic language of bodily, psychological and spiritual concentration in discovery of self, and very importantly the language of the spiritual path in his own Upaniṣadic and Advaita tradition: listening (śravana, as a form of study), thinking (manana, as the effort to understanding), and meditating (nididhyāsana, as a deep appropriation of what one has learned, that in turn changes one’s self-understanding), all to bring one as far as one can in this life time toward seeing (darśana). Madhusūdana therefore is an exemplary example of the scholar who was a practitioner of Advaita, yet bold enough to widen his circle of understanding and experience to include the very striking devotionalism of his native Bengal’s Gauḍiya Vaiṣṇavism.

An ideal seminar then, but this year it occurred in perilous times. The seminar began before the looming pandemic really caught our attention, but by the middle of March the situation had changed greatly. Like so many other courses in the United States and globally, the seminar’s second half occurred on Zoom, in a time of uncertainty and upset. Here the challenge was in part mundane, figuring out Zoom on the run, but also and more importantly, finding the right language and right sense of what teaching and learning are for, to make clear why reading the Gītā and Madhusūdana have power in a world that is falling apart. Other texts might have posed more troubles in this regard. But the Gītā itself is all about crisis, the impending slaughter of the Mahābhārata war and Arjuna’s internal collapse and paralysis in the face of it, his loss of meaning. It is about finding one’s way in a world that is brutal and bloody, and death as inevitable as birth; and it is about finding that God – for those who dare to see God – is Time, is Death itself. The challenge then was a matter of reading the Gītā in a time of pandemic, to defend the sane tranquility of study but at the same time pushing back, putting Covid19 back in its place as merely one (brutal) reminder that only by going much deeper can we live in a world that keeps coming apart. We talked about this in class, and I have had conversations outside of class with individual students. I cannot say it was all very effective, but the only irresponsible thing would have been to let the class fall apart, or to teach it as if nothing at all was happening. We think, speak, practice only in the world in which we are given in the present moment.

All of this takes the skills of a scholar-teacher-practitioner. You have to know the text, know the commentary, the contexts, the cited sources and secondary sources; you need occasionally to get behind the translations (including Feuerstein’s Gītā, which is quite good, and Swami Gambhirananda’s translation of Madhusūdana, which is very good); you need to be able to deal with the details your very bright students focus on (and make amends the next week for points missed the previous week); and in the end, you want to make sure it all works, opening into the truths of the texts that I have already mentioned, clearing the way for students to go as deep as they wish. There is, in brief, a skillful means in play: doing the needful each week, with all one’s intellectual and spiritual energies on alert for possibilities that no mere weekly class can contain. This kind of teaching is the practice of a scholar who tries to take to heart what she or he has learned in a lifetime, and then share it.

I am a scholar and author of many books. I have taught at the university level for 36 years, and as a scholar I have for even a longer time been committed to the challenges and virtues of simply reading classic texts, ideally with commentaries, allowing those texts’ questions and interests to claim space alongside questions and interests arising in the 21st century. Still, this seminar put me on the spot: make this learning work out in the classroom, with these students, this time around, in a very unsettled world. The challenge was to figure out what to do in the short period of time that is a semester, so as to do (some) justice to every page we read, while also aiming at a grasp of the whole, as text, in context, with the intellectual and spiritual power of the Gītā and Madhusūdana’s reading of it unleashed, just where we are.

A final note: I am a Roman Catholic priest, well-trained in seminary, and as a member of the Society of Jesus (Jesuits) too, heir to a nearly 500 year history of distinguished line of scholar-practitioners, men who sought to be certainly intellectually alive and attentive priests. As such, I am both blessed and burdened with Catholic and Jesuit history, the many instances of pioneering learning, unprecedented interreligious encounters, and amazing scholarship often in adverse situations – and also the many instances of misunderstanding, rude ignorance of the other, disrespect for venerable traditions, and convenient interpretations suited to our purposes. To teach a seminar on the Gītā with Madhusūdana at Harvard, as a Jesuit, for a group of students largely not Catholic, thus demands much of me, as Catholic scholar and as Catholic practitioner, neither concealing those facets of my identity — as if a neutral scholar — or letting them crowd out or obscure the truth of the Gītā and the truth of Madhusūdana’s reading of it. It would be easy to be a scholar immunized against both the Gītā and Christian faith. It is harder, and more life-giving, to try to be a scholar-practitioner, taking seriously both the Gītā and the Gospel, Kṛṣṇa and Christ, devotion and nondualism, all in the spring of 2020.