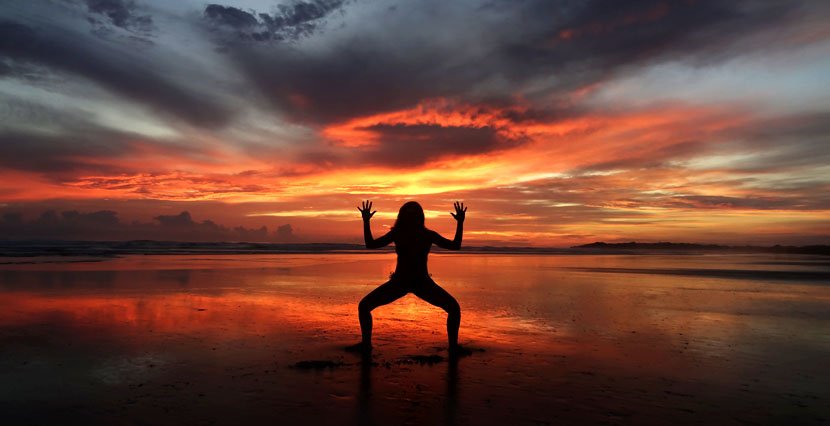 In her latest book, The Goddess Pose: The Audacious Life of Indra Devi, the Woman Who Helped Bring Yoga to the West, Michelle Goldberg, author and journalist, draws a complex picture of Indra Devi, a bold figure on the yoga landscape. Devi was woman who reinvented herself numerous times over the course of her life, who was present at many of history’s most important moments and who studied with some of the spiritual world’s most important teachers. Yet until now, no book has told her full story objectively. Five years in the making, including an FBI file and a field trip to Panama, this book has it all – yoga, history and intrigue.

Ms. Goldberg, a yoga practitioner herself, became fascinated with Devi after coming across her obituary. She went to buy a book about her – assuming that someone had written one – but couldn’t find one. She said to her agent, “Somebody should write this book,” and now she’s the one who has.

On a bright summer morning, I met up with Ms. Goldberg at a cool café in Brooklyn, to talk about her experience writing such a thorough, enlightening and often times harrowing story of the first lady of modern yoga.

Lisa Dawn Angerame: How did you approach the telling of this story?

Michelle Goldberg: It really started with a question. It seemed like something wasn’t adding up, like there was some piece to the yoga story that was missing. Because I love yoga, and also because I am a fundamentally skeptical, rationally-minded person, I just wanted to know about this thing that is so important to me – where does it really come from?

LDA: And you uncovered more than just Devi’s life story in your research.

MG: Yes, yoga is constantly reinventing itself. In fact, much of modern yoga was actually born from ideas garnered in the United States and brought back to India where other disciplines were incorporated. The Indians believed that in order to gain their independence they needed to be physically strong – think about Krishnamacharya.

LDA: Okay, Krishnmacharya. It has always been interesting to me that such different styles of yoga emerged out of his teachings.

MG: Well, he taught Devi differently than he taught his other students like Iyengar and Pattabhi Jois. And then she always said that what she was teaching was what she learned from her teacher.

LDA: Why doesn’t she have a worldwide community like Ashtanga or Iyengar?

MG: Devi had a lot of opportunities to develop her own brand or empire, but I think she was too free-spirited for that, ultimately never letting anything build up around her. But she did teach a lot of people and her influence really is far and wide – from Australia to Argentina. She simply saw herself as a conduit. She would always say, “I’m just a person.  I don’t pretend to be – .”

In the case of Ashtanga, my sense is that it is seen as genuine and therefore everything else is a derivation. People can say, “This is yoga as it is practiced in Mysore.” It is a system that doesn’t change – there are no new poses like rock star pose. It appears to go back further than the teacher in the studio in Brooklyn or wherever. It can be traced back, maybe not back 2,000 years, but for three generations, right?

And many people don’t go further than that because Pattabhi Jois and his guru, Krishnamacharya, said the style came from an ancient text. People took their word on that. Isn’t that how religion works in general? There is usually an unwillingness to dig into the historical claims surrounding the statements of the leader.

LDA: Thank you for being so objective in your analysis. It is one of the reasons why I loved the book.

MG: Oh, good. I’m so thrilled to hear that because at times I was afraid that even though I love yoga, my sensibility is not really the sensibility of the yoga community.

LDA: Did you feel kind of heretical?

LDA: And that is where Indra Devi comes in. How did she go about her teaching career?

MG: There was no clear trajectory. Devi was very, very adaptable. She had to be – it was the secret to survival. She was a child of war and forced to take care of herself at a young age. From Russia to India to Shanghai, she was always in the middle of instability.

By the 1950’s she was in Hollywood teaching some of the most famous stars of the time like Greta Garbo and Gloria Swanson. She wrote a book called Forever Young Forever Healthy presenting yoga into Eisenhower’s America. It’s filled with practical, wholesome, physical exercises that are relaxing and that have nothing to do with any weird Eastern religion. A little bit later, when the culture changed and people were open to metaphysical ideas, she adapted by infusing her teachings with more spirituality. By responding to the zeitgeist, she transformed too.

LDA: Her life story is fascinating and her place in yoga history is important which is why anyone interested in yoga should read this book. What else can you say about this woman?

MG: Also, she was very, very charismatic. People were just drawn to her and wanted to do things for her, to take care of her. She had this aristocratic sense of belonging that lingered from her childhood. The world opened up to her.

LDA: And there are some amazing and crazy stories in the book – castles and palaces, affairs and marriages, famous politicians and gurus! Okay, so, what would you say was Devi’s main teaching?

MG: Her central philosophy was love and detachment. My understanding of detachment is that it’s detachment from the fruits of your efforts. You do what you have to do and try to detach yourself from what happens and what’s out of your control. But it certainly doesn’t mean not having responsibilities.

I think the idea can easily be twisted where it just becomes, “I practice detachment, so, sorry about that.” I think that what Devi called detachment might have just been avoidance. It left me with questions about the extent to which you can incorporate that kind of detachment with fierce devotion to and involvement with other people.  It only appears practical if you don’t want to have absolute entanglements like a marriage or children.

LDA: Like the part about how she left her husband while he was dying to go on yet another adventure?

MG: That to me was the saddest part of the story. It made me really question the degree to which love and detachment are compatible. But in the way that Devi conceptualized detachment, it could have easily been an alibi for selfishness. And so, what I had to grapple with is that I feel like she exemplified the efficacy of yoga, that it was this powerful course of her life that allowed her to accomplish everything she wanted to accomplish, that transformed her, but I don’t think her life exemplified the ethics of yoga.

Find The Goddess Pose: The Audacious Life of Indra Devi, the Woman Who Helped Bring Yoga to the West online or in bookstores. For more on Michelle Goldberg, visit her website at www.michellegoldberg.net.