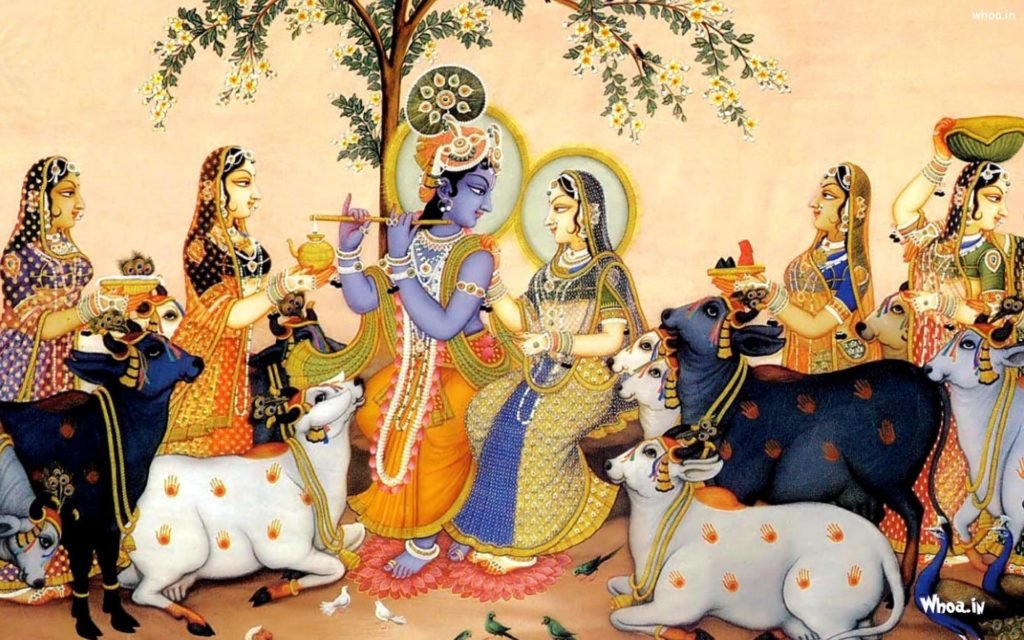 Central to the theme of the beloved Bhagavad Gita is an invitation to a way of living that seemingly contradicts most of what we in the West have thrived on as our most basic human right: free will.  The “Royal Secret”, described in Chapter 9 of the Gita, is this: there is no greater freedom than surrender to the Lord.  Material reality is an illusion; our attachment to form and possessions is the obstacle to happiness, and in order to know the Truth we must participate fully with no expectations or attachments to the all too human process that got us into this situation of suffering (dukha) to begin with.  In order to achieve the highest Yoga, Krishna says, each of us must fulfill our duty of being human. We must engage, participate, honor discipline and responsibility to our household; but ultimately we must give up identification with everything, the pleasant and the unpleasant, by offering it up to God.

It is no secret that the Bhagavad Gita is a theistic text – God, as Krishna, being the central character, focus of prescribed practice, and finally the goal of life.   But what of this “surrender” and “Lord” talk are we to take as literal, and what is metaphorical?  It is one thing to read a list of aphorisms and “tasks” (the Yoga Sutras) compiled and refined by a nameable figure, but it is another to read an account of what might be historical fiction that can be read alongside select Bible verses with ease.  The apex of the Bhagavad Gita, The Royal Secret, begs the question: do I have to be religious/believe in God to practice Yoga?  And by dismissing the theistic nature of the practice, do we, in fact, sacrifice our own ability to be free from suffering, opting instead for a “choose your own adventure” account of Yoga?

This concept of “surrender all to me” is fraught with conflict for many.  It is arguable that many of today’s contemporary Western practitioners of Yoga have found a refuge from their Judeo-Christian, patriarchal upbringing in Yoga; to learn that even Yoga has a God figure may drive some to merely dabble in this newfound wonderland of spiritual free-for-all.  But indulging in the process of “curating the self,” collecting more and more ideas and experiences in order to settle on a self-made self-concept is clearly not the same as stripping away the layers and surrendering all to a divine, timeless, “imperishable” force.  It is this “I” concept that Yoga has always addressed, the ahamkara, the impulse to divide and separate in order to make meaning.

While religious groups are doing a damn fine job dividing and separating in the name of “God,” it is through “surrender to the Lord” that Yoga actually encourages the opposite.  The “Supreme,” the “Imperishable,” the “Lord” is beyond our comprehension when we are consumed by the condition of being human.  It is often from that place of misapprehension that many other practitioners (or hesitant bystanders) of Yoga bristle at the thought of surrendering to what resembles a metaphorical character.  It comes up in most canonical texts, however, as a crucial component of practice, called isvara pranidhana.  But perhaps this notion can be overlooked by the list of austerities to be practiced and non-specification of the deity to be worshiped (“alright, it’s not really “God” I’m supposed to be doing this for…”).  We seem to have taken this thread of grace imparted by the invitation to “do” and “act” (karma/kriya yoga) in the world and run in the opposite direction than previously intended, forgetting that complicated condition from Ch. 2 verse 47:

Your right is to action alone;
Never to its fruits at any time.
Never should the fruits of action be your motive;
Never let there be attachment to inaction in you.

Our quest for answers has yielded false gods and demi-humans, raving hate-aholics and imposters on the political scene, as well as in the Yoga world.  The gurus and “masters” or the current Ted Cruz-ification of the Christian Right is enough to make anyone reject notions of surrender to a higher power.  Famed Atheist, Christopher Hitchens, wrote, “Take the risk of thinking for yourself, much more happiness, truth, beauty, and wisdom will come to you that way.  Beware the irrational, however seductive. Shun the ‘transcendent’ and all who invite you to subordinate or annihilate yourself. Distrust compassion; prefer dignity for yourself and others. Don’t be afraid to be thought arrogant or selfish. Picture all experts as if they were mammals. Never be a spectator of unfairness or stupidity. Seek out argument and disputation for their own sake; the grave will supply plenty of time for silence. Suspect your own motives, and all excuses. Do not live for others any more than you would expect others to live for you.”

Equating subordination with annihilation is compelling, and accurate, in fact, while also expressing an unfortunate linguistic correlation to surrender.  In today’s war-ravaged society, there are too many implications wrapped up in that word.  What a perfect opportunity to read the Bhagavad Gita and sit with Arjuna on his battlefield begging the eternal question, “what can I do?”  Is it so “irrational” to give ourselves fully to the life we’ve been given?  According to the Gita, we can renounce the world, we can restrain the mind from the senses, we can get up every morning and fulfill our duty to the village, but, until we give it all up to that benevolent, supreme force, we will still suffer a cyclical existence of believing that we are in control.  And those who know the Truth, that everything comes from and returns to the Lord, will indeed experience freedom, liberation from the cycle of reacting to life, attempting to control its outcomes.

The Royal Secret, according to Swami Rama, is that, “There is no secret […] anyone who desires that (higher) knowledge can attain it, but one who is engrossed in worldly pleasures and whose mind is dissipated and distracted does not have the power to understand and assimilate the higher knowledge.”  There is the teaching: you are suffering (dukha) that is the embodied reality, and once you get wise to (jnana) your own struggle with this human condition, you will recognize a desire (iccha) to experience freedom from suffering, which will lead to an awareness of the thoughts and behavior which cause suffering.  Once we learn this, we begin to live in a way (dharma) that reduces those pain-inducing thoughts and behaviors, which brings about change (svadharma).  Things fall away (vairagya), and what remains is entirely precious to us.  And when we live in such a state of reverence, we have surrendered (prapatti).

This surrender, prapatti, totally and wholly dedicating your life to that which is precious, leads to that larger understanding that I don’t have to name the object of my adoration “Krishna” for it to be meaningful or valid; rather, I can recognize Krishna as a messenger of that buoyancy I am now living, rather than a patriarchal figure demanding 10% of my earnings and blind obedience.

Perhaps my favorite description of this process comes from Sandra Anderson in her piece, Re-enchantment of the World: Yoga and the Ritual of Life.  She writes, “Sooner or later, authentic spiritual practice brings us to a radical shift in how we see the world—a transformation, a paradigm shift, or a rebirth as religions are fond of describing it. For most of us, it’s not a sudden dramatic shift like Saul on the road to Damascus, or Valmiki overcome by robbers in the forest of ancient India. It is, rather, a slow growth, an ongoing reworking and revision of preconceived notions, programmed actions and beliefs, and a self-centered view of life until, like the ancients, we see the world as enchanted. Yoga is the map for this evolution, but we are in danger of forgetting that as we focus on hot yoga, water yoga, this yoga and that yoga.

An integral part of this transformation is seeing the natural world as imbued with spirit, with consciousness, with divinity. “Earth, water, fire, air, space, mind, intelligence, and ego, this is my primordial nature, divided eight-fold,” says Krishna in the Bhagavad Gita. This means that each and every part of the world, including human beings, are aspects of the Cosmic Being, that all aspects of the world are intrinsically saturated with divinity, and that this natural world, imbued with divinity and sacredness, is an extension of our own self.

The call to surrender is a call to act with reverence, trust and joy in a deep belief that there is beneficent force present at all times, even in the midst of the most trying times.  That deeply held conviction that goodness is always available and in fact the motivating force for all life might just cause someone to rethink their choices.  It is not an invitation to throw in the towel when it seems the choice has been made for us, nor to sacrifice our very real capacity to choose an action to someone else’s wish or whim.

We all make sacrifices daily, with our time, our preferences, our behavior.  But are any of these sacrifices truly a “surrender” of our will to be in control of it all?  As with anything, we can suit the punishment to the crime, (“I ate six donuts over the weekend, I’m definitely getting to class six days this week! Tapas!”)  How often do we really – truly – offer our tender hearts, the first bite of our favorite meal, our “victorious” breath to the Supreme, the Supreme being which is responsible for that rude person who cut in line at the grocery store, as well as the relief provided by a new baby’s smile?  How liberating would it be to adore, to revere, to worship the lila of it all?

Our willingness to believe in an all-powerful benevolence has been shattered in countless ways, and the Bhagavad Gita might be a gentle invitation back to a place of wonder.  Bestowed with the freedom to live exactly the life we’ve been given and the opportunity to fulfill our destiny by showing some respect to the “divine” light in everything, it shouldn’t surprise nor upset anybody that the Americans have gotten their hands on Yoga.  If ever there was a need for a re-enchantment, it’s now.