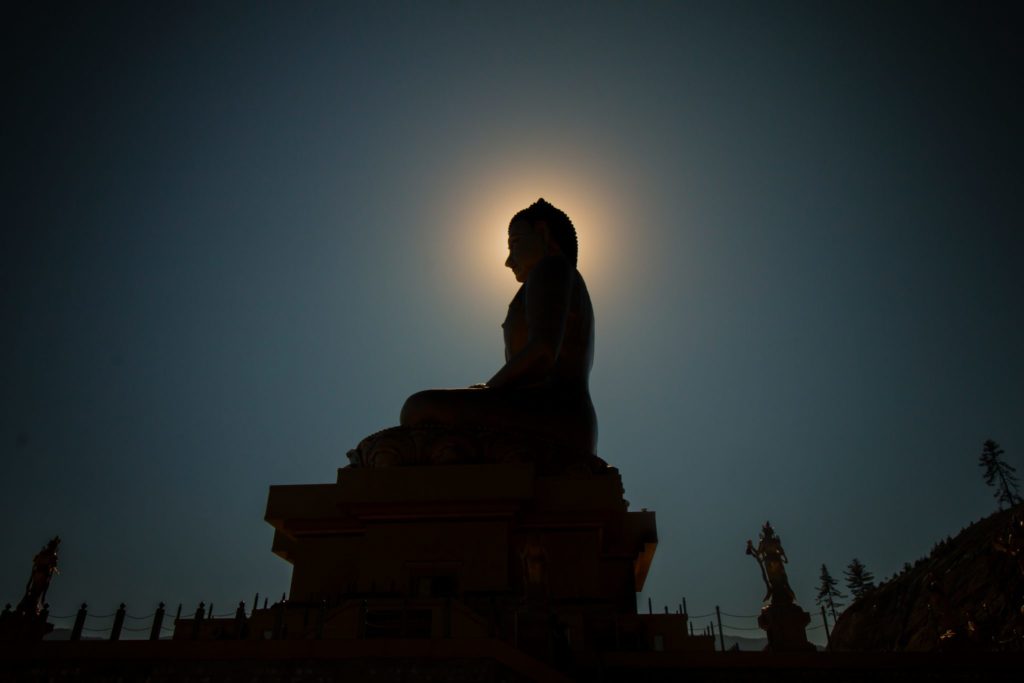 I have a love-hate relationship with the aphorism “happiness is a choice.” On the one hand, the saying has wonderful potential: it can speak to the power we could have (or already do have) to lift ourselves out of emotional quagmires. But on the other, it can completely dismiss the power that anger and pain can have over a person.  Repeating these words to a loved one when they are going through a difficult time can tell our loved one that we think their painful experiences are invalid, regardless of whether they think we might have meant well.

However, if we were to replace the word “happiness” with “kindness,” “love,” or even “anger,” the saying becomes less disposable. Happiness becomes important and relevant when we recognize its relationship to our actions and emotions.  Suddenly, wishing for someone to have happiness, or even to create it themselves, means something.

But we have to understand that happiness is not a component of a good life. It is the result of understanding, patience, and loving kindness.

The metta-bhavana is a meditation many of you may be familiar with. The basic framework is most accessibly (in my opinion) outlined in Chapter 9 of Buddhaghosa’s Visuddhimagga (Pali: Path of Purification), dating back to the 5th century CE. The most well-known definition of “metta” is “loving kindness.” Another meaning, as Bhikkhu Bodhi translated, is “kind friendliness,” as “metta” derives from the Pali word for “friend.” “Bhavana” is usually translated as “meditation,” but it more literally means “cultivation” or “development.” During this process, loving kindness is meant to remove anger, hatred and delusion, and transform things which would normally trigger these emotions into opportunity for creative problem solving.

The metta-bhavana, while originally meant to be a deep work taken on early in the spiritual lives of Buddhist initiates, is now a practice shared by a world community. Many practices list 5 formal stages to this meditation, but as the Visuddhimagga discusses some thoughts and emotions that must be “reviewed” before beginning the practice, I think it is worth considering that review to be a stage in itself.

To reference the immortal words of Kung Fu Panda’s Master Shifu: there is now a level zero. The Visuddhimagga teaches that one cannot simply jump into metta-bhavana without first acknowledging some common affective traps. Wrong thought, greed, and hatred are three cycles which can be escaped by cultivating metta. In Buddhist thought, these three qualities are referred to as “defilements of the mind.” (Gethin 1998, 80) However, in order to truly escape these cycles, it is necessary to do two things:

The dangers of hatred and anger can be countered by exercising patience and tolerance, both of which are necessary to begin understanding metta. (Visuddhimagga 9.1-3) Patience and tolerance are called “advantages,” and this is, from the standpoint of one seeking to cultivate self-discipline, a useful way to think of it. An advantage can be thought of as something that is more useful than another, or something that makes one’s labor (physical, intellectual, emotional, spiritual) easier, or something that is simply more powerful than something else. This is not to say that the defilements of the mind are not powerful: rather, acknowledging this dimension of power helps the practitioner recognize how easy it can be to succumb to hatred, anger, and delusion.

Or to put it more simply: how easy it can be to fail.

Unlike the next 5 stages, this stage doesn’t really have an affirmation (as such) linked to it. This does not mean that the Visuddhimagga dismisses this stage’s importance: rather, it advocates focusing on acknowledgement and understanding of the defilements’ role in our thinking. To attach an affirmation to this step, for Buddhaghosa, might have been either a little too revolutionary, or even a way to invite the defilements in. However, I see having an affirmation at this stage as being an opportunity to sit with difficult affect. Perhaps it might go something like this:

“I recognize. I understand.”

The self is considered to be the easiest place, psychologically speaking, in which to start developing mettā. The Visuddhimagga specifically warns against starting anywhere else but with oneself, as starting elsewhere can awaken strenuous emotions: such as fatigue (if trying to cultivate any kind of feeling toward a neutral party), sadness (if a loved one stumbles in life), and anger (in the case of one’s enemy). These things serve no purpose but to build walls between the practitioner and their goal. If one does not have a base of metta upon which to build, their efforts will not last. (Visuddhimagga 9.3-7)

The Anguttara Nikaya teaches that this inward direction does not mean that developing metta within oneself acknowledges a “self,” per se: rather that, only by building one’s inner intention can one radiate it outward. (Sheth 2006, 817)  Further, Buddhaghosa reminds his students of an affirmation in the Metta Sutta, which reads: “in gladness and in safety, may all beings be at ease.” (Visuddhimagga 9.9) “All beings” includes the self, and this is perhaps the most difficult part of this meditation.

The affirmation for this stage (Visuddhimagga 9.8) can be interpreted in a number of ways, but the essence is: “May I be happy and free from suffering.”

Toward our loved ones

The next stage of the metta-bhavana focuses on a person close to us, whom we love and respect. After we are able to develop loving kindness within and for ourselves, it becomes easier to focus on someone close to us, and not despair when something bad befalls them or when they become angry when they are wronged (either by another person or by ourselves). During this stage, the practitioner focuses on recalling the qualities, kind words, etc., which inspire feelings and thoughts of affection. (Visuddhimagga 9.11) By expanding our metta to a loved one, the practice of patience and tolerance moves outside our own minds, and begins to have a real effect on the world. This stage is where the practitioner begins to understand the universe’s true nature: as an interdependent wholeness which, while made of many, is one.

“May my loved ones be happy and free from suffering.”

At this stage, the development of metta begins to compound exponentially. Now that one has an understanding of the nature and power of the defilements, metta inside and for oneself, and metta for loved ones, it is time to use what one has learned about the mutable, moldable nature of consciousness to expand one’s “mettaspheres.” Not only does the practitioner expand their meditation to include people for whom we don’t feel particular affection or enmity for, but they further expand the metta cultivated for the self to their loved ones. (Visuddhimagga 9.12)  So not only do we have lovingkindness for our loved ones as loved ones, but as ourselves.

This is the stage wherein the metta we first had for loved ones extends to people we are indifferent to (or possibly for whom we actively cultivate indifference?). While not as easy to do as the last two stages, it is still simpler to accomplish this goal than it is with those we regard with hostility, simply because there is little to no affective attachment. Thinking of a neutral person does not trigger us in the way that thinking of loved ones or those who have harmed us can.

“May those around me be happy and free from suffering.”

Toward those with whom we are in conflict

This is the most difficult stage of the metta-bhavana. The Visuddhimagga dedicates more space to discussing this sphere of human relationship than any other as far as cultivating metta is concerned. So much, in fact, that there are mini-stages within this stage. Getting rid of resentment is a necessary part of cultivating metta either for a person for whom we have antipathy, or an enemy. (Note: the Visuddhimagga hints that there is a difference between these two, and it also recognizes the possibility that a person may have no enemies. For the purposes of the metta-bhavana, there is no functional difference between actually having no enemies, and truly/selflessly regarding oneself as having no enemies.)

Banishing resentment is a complex process. There are some thoughts that must be overcome first. Among these are the tendency to delight at an enemy’s failure, abiding anger when thinking about ways this person has wronged you, actively wishing misfortune on the person, and being jealous or angry when recognizing an enemy’s beauty. (Visuddhimagga 9.14-15) If releasing these is not enough to eliminate resentment, the practitioner remembers something good about that person, specifically something that causes good feelings. To hold this image in one’s mind makes it easier to control one’s thoughts, words, and actions toward that person. (Visuddhimagga 9.16-19)

When all of that fails, it is time for the practitioner to essentially induce compassion (karuna). The Vishuddhimagga suggests a bit of an extreme affirmation if this is needed: “Though he is going about in the human world now, nevertheless after a certain number of days he will find himself in [one of] the eight great hells or the sixteen prominent hells.” (Visuddhimagga, 9.20: see Nyànamoli tr. The Path of Purification 3rd edition (Buddhist Publication Society 2011), 295.)    This thought is essentially a way to shock the practitioner into a state of pity for their enemy, and by doing so, let their resentment go.

The Vishuddhimagga goes on to list many more things that must be done if this third method does not work, including recognizing one’s own responsibility for their feelings, all the way to giving a significant gift to the person to try and obtain karmic merit to make up for some that was lost in the process. (Vishuddhimagga 9.21-40) But no matter how long it takes, eventually the metta-bhavana for a hostile person will transform into that for a neutral person. Then a loved one, and eventually, to that of oneself.

“May my enemies be happy and free from suffering.”

“May those I once knew be happy and free from suffering.”

Toward all sentient beings

The ultimate goal of the metta-bhavana is to embrace all sentient beings within the radiant metta cultivated through their practice. This includes human beings whom we have not met, potential life in the rest of the universe, and even some non-human life on Earth. Even though numerous Buddhist sources define a sentient being as a being which has cognitive faculties and the potential to reason, the meaning of “sentience,” and what it applies to, is still evolving. To wit, some Tibetan teachers have questioned at what point artificial intelligences will be considered sentient.

Further, one has to consider the possibility that not all sentience is human. The 2014 case of Tommy the chimpanzee in Fulton County, New York (which was recently reopened) questioned the person-hood of non-human primates. Cases such as these may create an even greater intellectual responsibility for the metta-bhavana practitioner, and further widen the final mettasphere. But even entertaining the possibility may yet be enough to complete one’s journey to conquering the defilement’s of the mind and exercising loving kindness for all.

“May all beings be happy and free from suffering.”