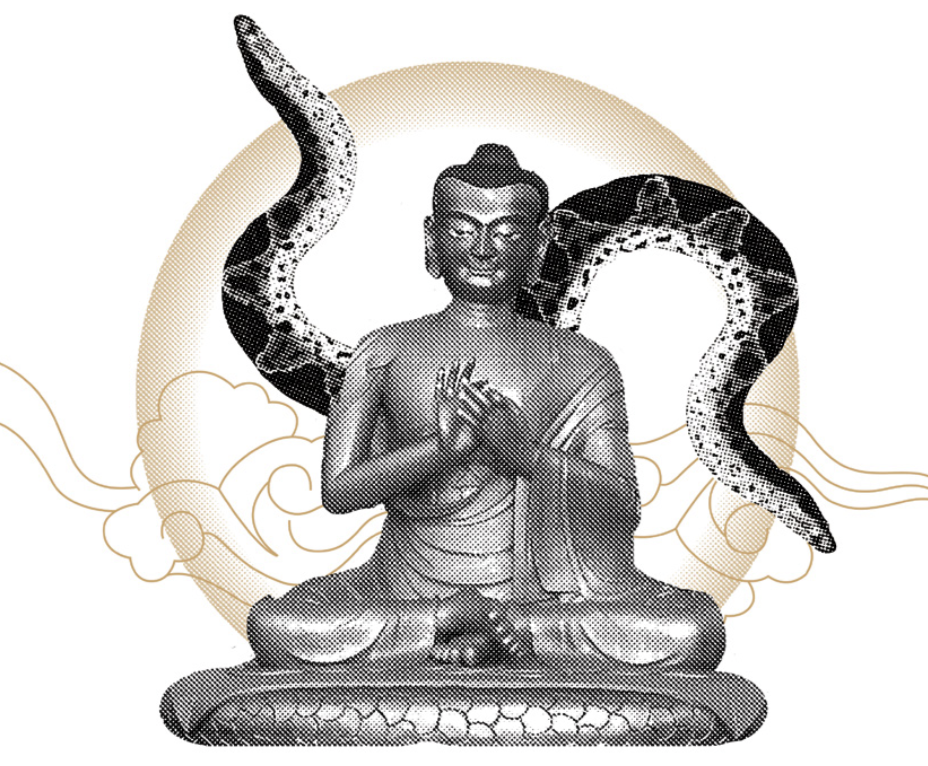 Nāgārjuna is by any account the most influential Mahāyāna philosopher.  He is the founder of the Madhyamaka school of Buddhist philosophy and is immensely influential in subsequent Indian thought (Buddhist and non-Buddhist) as well as in Tibetan and East Asian Buddhist thought. Despite this fact, we know little of his biography.  Canonical biographies are hagiographic, and are of little historical use. It does appear that he flourished during the second century of the Common Era, although some argue for dates in the late first century or in the early third. Joseph Walser has argued persuasively that Nāgārjuna almost certainly lived in the lower Krishna River valley, in what is today the state of Andhra Pradesh in India, and almost certainly lived in a monastery that, like many monasteries of that era, housed both monks who followed the nascent Mahāyāna and those who did not. It is very likely that he was an advisor to one or more local kings, and that he held a leadership position within his monastery.

A large number of texts on various topics are attributed to Nāgārjuna, but the consensus of modern scholars is that this entire corpus was not composed by a single author, or even in the same era. It is possible that there were two or more scholars of that name, or simply that many texts were ascribed to Nāgārjuna in order to give them the authority that that authorship would confer. There is a core set of texts that most scholars conclude were composed by the same individual, and it is to that individual that we take the name Nāgārjuna to refer.  Those are Fundamental Verses on the Middle Way (Mūlamadhyamakakārikā), Replies to Objections (Vigrahavyāvartanī), Sixty Stanzas of Reasoning (Yuktiśaṣtika), Seventy Stanzas on Emptiness (Śūnyatāsaptati), Devastating Critique of Categories (Vaidalyaprakaraṇa), Establishing the Conventional (Vyāvarharasiddhi), Precious Garland of Advice (Ratnāvalī), and Letter to a Friend (Suhṛlekha).  There is also a collection of devotional hymns (stotras) of contested attribution.  All of these texts have been translated into English.

Of these texts, by far the most important (and the most extensive) is Fundamental Verses on the Middle Way.  It is here that Nāgārjuna develops the Madhyamaka account of emptiness, argues that all phenomena are empty of intrinsic nature, and articulates his distinctive account of the two truths, reflecting his thesis that even emptiness itself is empty.  While this text is thematically related to the doctrines developed in the Perfection of Wisdom (Prajñāparamitā) sūtras, the only sūtra actually cited in the text is the Pāli Discourse to Kaccayāna (Kaccayānagotta-sutta).

While neither the idea of emptiness nor the idea of the two truths is original with Nāgārjuna (each is found in some guise even in the early Pāli canon), Nāgārjuna’s own synthesis of these ideas and interpretation of their significance is distinctive, and reflective of the new Mahāyāna tradition inspired by the Perfection of Wisdom literature. In particular, while Nāgārjuna respects the distinction between the two truths (conventional and ultimate, 24.8 ff) he also asserts their ontological identity, through his identification of dependent origination and emptiness (24.18-19).  And his extension of the doctrine of emptiness to cover all phenomena radicalizes that doctrine.

Nāgārjuna also breaks new ground in his deployment of Buddhist four-valuational logic (catuṣkoṭi) according to which any statement may be imagined to be true, false, both, or neither. He articulates it in both a positive sense—suggesting for from a conventional perspective, each of these alternatives may be entertained—and in a negative sense, suggesting that from an ultimate perspective, none of the alternatives make sense. This leads to the idea that ultimate truth is inexpressible and inconceivable, despite its identity with the describable conventional truth. These (at the very least apparent) paradoxes lie at the heart of Nāgārjuna’s project and set considerable exegetical challenges for his commentators.

Fundamental Verses is indeed the subject of many Indian, Tibetan, and Chinese commentaries, developing a diverse set of interpretations of Nāgārjuna’s position. The earliest of these is the terse Akutobhāya, the authorship of which is unknown. Much of this commentary is replicated in the next commentary, the eponymously titled Buddhapālita. That commentary in turn was criticized by Bhāviveka (500-560 CE) in his Lamp of Wisdom (Prajñāpradipa) and its autocommentary Blaze of Argument (Tarkajvālā).   Bhāviveka criticizes Buddhapālita for not recasting Nāgārjuna’s reductio arguments as positive probative arguments in the form then becoming common to Indian philosophy.

Candrakīrti (c. 600-650), replies to Bhāviveka in Clear Words (Prasannapadā), arguing that the reductio argument is essential to Madhyamaka methodology in virtue of its critical, deconstructive nature, and in virtue of the fact that the shared understanding of the meanings of terms necessary for positive probative arguments is impossible between a Mādhyamika and an opponent. This split between Bhāviveka’s and Candrakīrti’s respective interpretations is reflected in subsequent Indian commentaries and Madhyamaka treatises, with scholars such as Jāyananda and Āvalokatavrata taking Bhāviveka’s side and others such as Śāntideva following Candrakīrti. This split was thematized in Tibet as the distinction between two kinds of Madhyamaka — rang rgyud pa and ’thal gyur pa (svātantrika and prāsaṅgika in Sanskrit) — or those who defend their own position and those who use only reductio arguments, respectively. The Tibetan commentator Tsongkhapa is known for having articulated this distinction as philosophically significant, reflecting different understandings of conventional truth.

Replies to Objections deals with a set of objections from the orthodox Indian Nyāya school against the analyses defended in Fundamental Verses.  It is noteworthy for its controversial and variously interpreted claim that a Mādhyamika is not committed to any proposition as well as for its argument that we can make no sense of independent epistemic warrants (pramāṇas), and a defense of a coherentist theory of knowledge according to which epistemic warrants and objects of knowledge are mutually dependent.

Sixty Stanzas, Seventy Stanzas and Devastating Critique round out Nāgārjuna’s metaphysical and epistemological texts with specific analyses of the relationship between conventional and ultimate truth, the nature of emptiness, and a critique of the Nyāyika ontological categories.  Precious Garland and Letter to a Friend stand out in Nāgārjuna’s corpus as his only ethical texts, and Precious Garland is indeed the only text on political philosophy in classical Indian Buddhist literature.  Letter to a Friend shows how to use the Madhyamaka analysis of emptiness as a basis of the cultivation of ethical sensibility, and Precious Garland develops the implications of emptiness both for personal ethical development and for public policy, arguing for an extensive social welfare state, a government grounded in a commitment to care for its citizens, and for the state support of Mahāyāna Buddhist institutions.

Nāgārjuna’s philosophy is widely studied both in Asian Buddhist cultures and increasingly in the West. He is one of the most profound philosophers in human history.