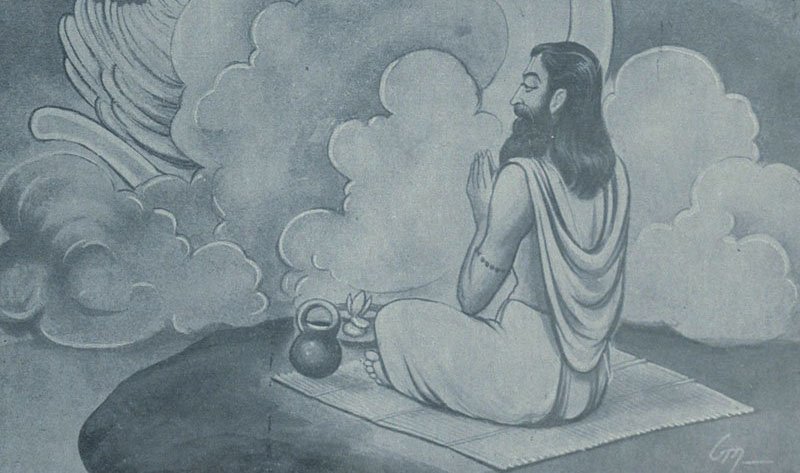 Yājñavalkya is one of the most memorable characters in Vedic literature, known not only for his wit, insolence and intimidation – he nearly purloined one thousand cows from a group of renowned brahmins just before shattering the head of one of them –, but also for the profundity and newness of his thought.

In two Vedic texts, the Śatapatha Brāhmaṇa (ŚB) and the Bŗhadāraņyaka Upaniṣad (BU), Yājñavalkya innovated thinking in a society dominated by complex ritual action as his character introduced new, esoteric ideas like karma and atman. This article will consider where these ideas may have come from, before examining the ways in which Yājñavalkya formulated and legitimized change, contesting established tradition of the time.

In doing so, Yājñavalkya – or, if he was not an actual historical figure1, then at least the author of the ŚB and the BU – subordinated the dominant ritual practice of the time to religious speculation and belief, setting the stage for classical Indian philosophy as we now know it. 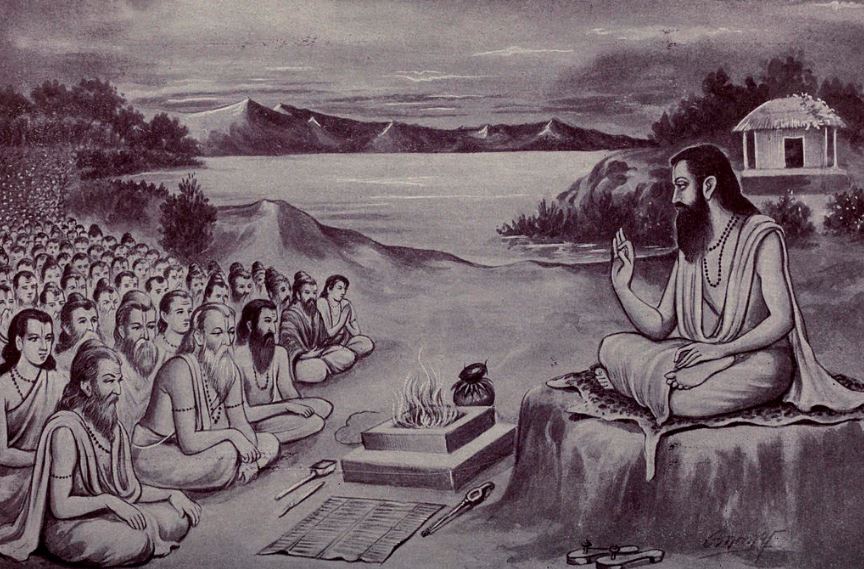 The Vedas are a wide corpus of sacred texts composed orally and produced by Sanskrit-speaking Brahmins in the South Asian subcontinent between approximately 1600 and 600 BCE.2 Their main aim was to present, justify and explain ritual practice (Proferes, 27). What started as a relatively simple set of domestic rituals set around a sacred fire, grew into a much more elaborate series of ritual sacrifices performed around several fires by a number of priests, each with their own expertise, be it sacrificial action, singing, or recitation.3

That is not to say that early Vedic society was devoid of an imperative seeking understanding of human nature and existence; we just have little direct textual or archeological evidence relating to religion outside of ritual practice in the period after the Indus Valley Civilization (that ended around 1900 BCE) up until 500 BCE.4 In the absence of such evidence, one can safely assume at the very least that no premium was placed upon such philosophical consideration.

It’s not until the early Upanișads5 that we have evidence of the kind of religious speculation that begins to supersede ritual practice. But what is the source of these ideas? It is the subject of vigorous debate, and scholars have generally argued one of three theories: First, that Vedic ritual itself served as a catalyst for early Indian intellectual thinking. Second, that an external influence came into play, but probably not from Buddhism or Jainism, as it’s generally agreed that the early Upanișads pre-dated the lives of the founders Buddha and Mahavira. And finally, as Bronkhorst controversially theorized in Greater Magadha, that there was a common third tradition that influenced both the brahmanical and śramaṇic (Buddhist, Jain and Ajivika) traditions.

I would argue that a shared Indo-Aryan language, establishing trade routes and a desire on the part of Brahmin priests to convert populations resulted in a slow cross-pollination of ideas as Brahmins moved eastward from the Central Gangetic region to the Kuru- Pañcāla and Videha (where we see Yājñavalkya become a figure of the East in his debates with priest and dialogues with kings.) Cultures would have unavoidably been exchanged, mixed and absorbed into each other, resulting in these new ideas that the Yājñavalkya of the BU – and to a lesser extent the ŚB, where he is primarily portrayed as a ritualist – deliberated upon. It’s important to remember that these texts were unlikely to have been composed as units at one particular time; rather, they were often compilations of material that blended together over centuries6 so influencing through would have been ongoing. 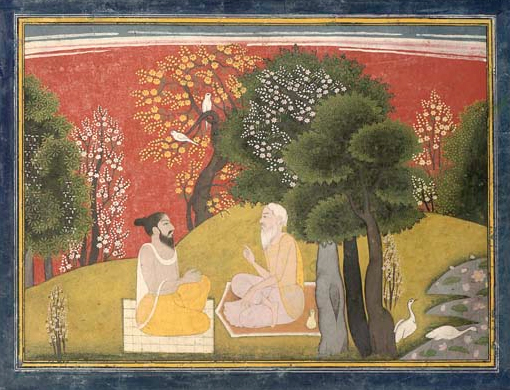 Yājñavalkya’s character, for me, comes most alive in the third chapter of the BU where he outwits eight Kuru-Pañcāla brahmin opponents in a courtly competition sponsored by Yājñavalkya’s patron, King Janaka of Videha7, to determine who is the most learned priest. Yājñavalkya displays contempt for the Kuru-Pañcāla brahmins – and by extension their ritualistic ideology – by declaring himself the winner of the debate before it even begins, as he audaciously instructs his pupil to just go take the prize of a thousand cows with ten pieces of gold tied around their horns (BU 3.1.1-2). By claiming to be the most knowledgeable, Yājñavalkya puts himself in the position of then having to defend himself8 as the priests grill him on the cosmos, the nature of death (BU 3.2.11-13) and the immortality of the Self (BU 3.7.16-23).

It is here (BU 3.2.13) that we first come upon – albeit in a frustratingly vague manner – one of Indian religion’s most famous concepts: Karma. The priest Ārtabhāga asks Yājñavalkya what happens to a man when he dies, and our Upanisadic hero cryptically tells his interrogator that the question cannot be answered in public. Black argues the reluctance to share his knowledge in public is one of Yājñavalkya’s debating tactics (Black, 76), but to what end? To throw him off balance by pulling him to the side? Rather, I would offer that Yājñavalkya might be taking pity on the wider Brahmin community as they might not be ready to understand that the possibility of rebirth as “a man turns into something good by good action, and into something bad by bad action” (BU 3.2.13), especially when they consider that that action (which provides direction after death) might not be ritual action but rather individual action. So I read Ārtabhāga’s falling silent not so much a reflection of his defeat but of astonishment.

Yājñavalkya goes on to outthink even more brahmanical opponents, his last exchange with poor Śākalya, whose head is shattered apart (BU 3.9.26) when he cannot answer the one and only question Yājñavalkya poses in the entire debate.9 Does the resounding victory of Yājñavalkya, a figure of the east, serve as literary device symbolizing the triumph of eastern thinking (newer, Upanishadic ideals) over west (orthodox opinions about ritual)? I believe that is the agenda of the BU authors here.

We even see Yājñavalkya – and by extension his ideas – elevated above the status of a king when in (BU 4.2.1) King Janaka physically steps down from his throne to pay homage to the winner of the philosophical tournament in what could be seen as a metaphor for the abdication of his authority in sublimation of Yājñavalkya’s superiority.

We receive more instruction on karma in the ensuing dialogue between Yājñavalkya and Janaka and learn that man’s actions are what create him, and that man is not who he is until he acts. And how does he act? Out of desire10, Yājñavalkya tells Janaka: “A person here consists simply of desire. A man resolves in accordance with his desire, acts in accordance with his resolve, and turns out to be in accordance with his action” (BU 4.4.5). It is only when man changes his relationship with his desires that he becomes immortal, or escapes rebirth and “attains brahman.” (BU 4.4.7.) And yet, Yājñavalkya tells Janaka, the accumulation of good action does not necessarily make a person better, or indeed worse by bad action (BU 4.4.23). Action falls under the control of the individual, which is not the same as ātman, as the self “passes across” both good action and bad: “(This self) is not burnt by anything that he has done or left undone.” (BU 4.4.23.)

Furthermore when one gives up desire (for sons, for wealth, for conquering land) one is able to see the self, and in the BU this knowledge of identity is framed in terms of power – “he is the lord of all!” (BU 4.4.22). And how to see and know the self? Through the apophatic process neti neti (not this, not that.) Yājñavalkya says, “He is ungraspable, for he cannot be grasped. He is undecaying, for he is not subject to decay. He has nothing sticking to him, for he does not stick to anything. He is not bound; yet he neither trembles in fear nor suffers injury.” (BU 4.4.22)

Yājñavalkya eventually gives up court and household life11, becoming, according to Witzel, one of the very first people in Vedic literature to leave mundane concerns behind him and become a mendicant. So we have Yājñavalkya not just as a Vedic priest, a teacher and a philosopher but also as a mystic, a householder and a saṃnyāsin. But Witzel cautions against seeing him as separate parts, which in effect compartmentalizes our hero: “We … have to treat all available passages as describing the whole person.” (Witzel, 106)

It’s not just the roles he inhabits, but also his personality traits – flashing temper, dry wit and biting sarcasm – that make Yājñavalkya so real. He is uniquely human having ordinary conversations on action, desire and identity with real kings, priests and wives. Such a literary device serves to magnify, aggrandize and legitimize his ideas – a deliberate strategy, I would argue, on the part of the Upanișadic authors to oppose, critique and ultimately move away from the world of gods and celestial beings that we saw in the Brāhmaṅas.

And so Yājñavalkya opens the door to an era of dynamic change in Ancient India, leading to a new orientation toward the self and the process of life and death.