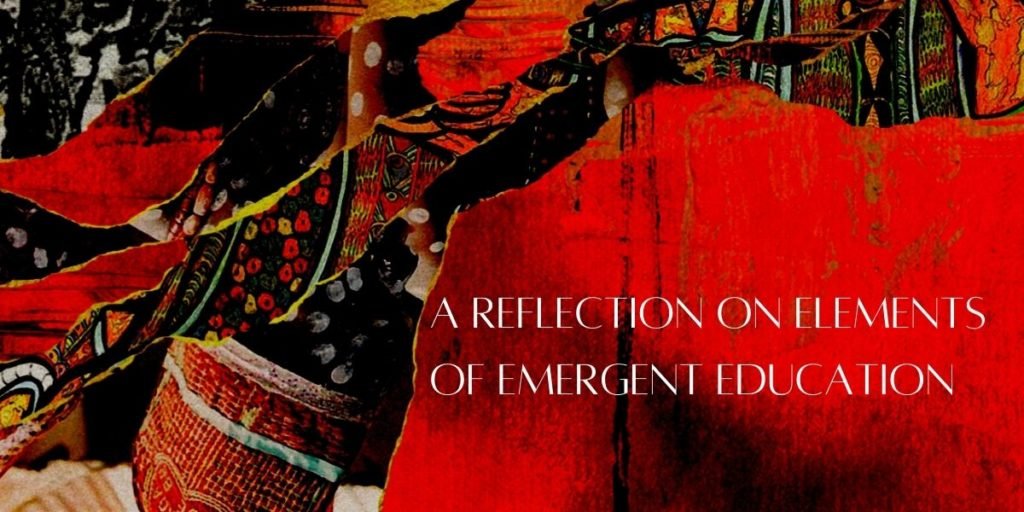 Is the Past Also the Present?

When I was in Australia recently, I became absorbed by the landscape. Away from phones and for the most part WiFi, I was conveniently removed from my customary habits and the draws for my attention. I was able to listen. Not listening to anything in particular or for anything in particular. Just listening. The longer I was there, the more I could sense, hear, feel, as if by listening carefully, I could absorb the landscape into me. The bird calls, their whips, whistles, caws, and bells. The brush of wings. The rustle of dry gum leaves and paperbark. The thump of wallabies and little joeys beside them. Oh, and the cicadas with their endless music. The butcherbirds and gerygones singing the melody and raga of the bush. They grounded the landscape, maintaining it. It wasn’t just sounds I was drawing into me; it was a merging with the lifeblood of the mountain, canyon, and dove white coast.

There were artifacts, some 14,000 years old, in the hills where I was. The presence of the footsteps of these ancestors hung in the air. As I listened, it was as if I could hear them, too. Their remains were part of the humus that softens sound in the wild, their presence still there, still coloring the landscape. My own steps and movements were now also part of the symphony, the echoes of generations past and future, sounding together, all at once. In the dreamtime of the aboriginal people, past, present, and future are all merged into one. In some of the more farout theoretical physics there is a theory of time collapsed into itself, or of time as a process that bends in a three-dimensional motion, more like a sphere or a torus, rather than a line, it moves in a single flow, pouring over and into itself. In some way, this type of seeing does still fit with our dominant paradigm, just interpreted a little differently. Everything is part of a continuum, a whole, a single that cannot be separated into discrete parts. The past sets certain actions in motion, which create certain possible outcomes and eliminates other possible outcomes. Our present reality is influenced and to some extent determined by those outcomes. And our actions similarly shape the future. The past is very much alive in our present, and the future is also directly shaped by every single action now. Is there a way of seeing that takes all this into account viscerally? Not through reasoning or deduction, but through apprehension, through an awakening that illuminates to us a profoundly different sense of time? One that is unitive and filled with the possible.

Realizing there are other valid paradigms and ways to see the world softens the edges of what we take to be possible. It allows for new ways of seeing to emerge. We start to see that our worldview is constructed, agreed upon by the dominant culture, and that it is not the only way of seeing. The way we customarily perceive time, history, causality, or consciousness may not be the deepest, most inclusive way, or the way that gives rise to the highest human potentials.

I am not a romanticist for past worldviews. We cannot go back to an age before technology or literacy. But other cultures were privy to understandings that we cannot discern now. We have indeed forgotten some knowledge. While we can open up to those worldviews, I am not sure that we will be able to authentically intuit that knowledge in its fullness anymore. Times, and our sense of consciousness, have changed too much. But we can become sensitive to alternative and intuitive knowings of life that are more subtle and have different dimensionality than the framework we currently operate in. Our current worldview so bluntly separates me from you, present from past, self from other, human from world. That’s the reality young people today are taught to experience. There are other credible ways to see the world.

In the period after World War I, Alfred North Whitehead moved from Britain to become dean of philosophy at Harvard, having never taught nor taken a philosophy class before then. It was at Harvard that he began to call a more inclusive and relational view “process” and proceeded to articulate a philosophical view of the world that became known as process philosophy. Rather than a series of discrete events, he saw everything as a flow, as experience. Gregory Bateson called this relatedness. Bateson would not see the five fingers on a hand; he would see how they related, the space between them. A worldview that does not harshly divide us in the way the Cartesian worldview does gives us access to very different sensitivities. Individually, when we feel a part of something, part of a whole, we experience safety, release, rest. We feel, intuitively, not so small or alienated as we so often see ourselves in our vast, fast-paced world. With an almost imperceptible shift, where nothing changes, we experience ourselves a non-separate from the newborn, healthy or struggling for her first breaths, or the early humans just learning to spark fire from twigs and tinder, or the technologist plotting trajectories on graphs to program a flight path to Mars.

A process-oriented view has many dimensions and capacities, many ways of looking in. It is different from our own in these ways: First we see that our own worldview is constructed, a set of beliefs that orders reality. Then we see that it is not the only way to see reality. All of a sudden, we find we have allowed ourselves to consider other paradigms and worldviews, to test the waters and let go of our moorings, becoming informed by other ways of perceiving the world around us. Once we consider alternative views, we open the door to creativity, expansion, solutions, and connections.

While it may sound destabilizing to consider alternative worldviews, those individuals who are most able to see the world from various vantage points are able to leave room for emergent understandings and solutions, for open gates around the corner of what seems like a brick wall. They can intuit a punctuated change that has the capacity to avert a linear course of destruction. Youth find adventures in paradigm shifts thrilling. They love the possibilities and find the exploration wild and risky—in a safe way. A teen’s desire to explore and push the boundaries becomes a creative imagining of how the world can be, resulting in inventions in sounds and music, dress, language, relationship. Exercises in paradigm shifts invite students to question authority, the authority of the dominant worldview, and what would teens rather do than that?

What Is a Paradigm Shift?

Right now, students for the most part, are unconsciously being taught—and are adopting—the Cartesian worldview. This view sees “us” and “them,” humans and the rest of the world, mind as separate from body/matter/form. Based on the profound and, at the time, radical insights of René Descartes, this shift in paradigm and worldview, in how we see and relate to everything else revolutionized thinking. Now we can see that that way of interpreting how the world works is but one way, a single way, not the only way. It was a brilliant method and view that replaced earlier thinking, and one that can be replaced as we articulate a worldview that transcends this way of thinking. One that offers a more subtle, more complex, more elastic, and more useful lens through which to view the world around us. Time has shifted. Needs have shifted. And the impact of the Cartesian split has become apparent in our world and in many of the unanticipated issues that arose as a consequence of separating the seer and the seen, human from nature, us from them. It is important as educators—and as students—first to recognize that we have adopted a worldview. And that has been from the choices presented to us, and they influence the way we assimilate fundamental ideas and beliefs from the world around us. When we recognize that we are seeing the world one particular way, and can see the world differently, this has a profound effect on our ability to assimilate new ideas, new ways of being in the world. Seeing the worldview we currently use, even without being able to replace it with a more inclusive one, is a large part of “seeing in context.”

All the great philosophers and social revolutionaries have been able to question the worldview they were submerged in and intuit new possibilities for ordering and structuring reality. Nelson Mandela was able to see a world of white and black equality in apartheid South Africa. Mother Theresa was able to see worth and dignity in the throwaway lives of the dying poor in Calcutta. Galileo was able to see the Earth revolving around the Sun and the social implications of that shift in perspective. Twentieth century philosopher, linguist, and mapmaker of the structures of human consciousness Jean Gebser (1905–1973) saw emergent capacities of consciousness, positing a different relationship to time, space, and presence. Contemporary scientists like David Christian see the world in Deep Time, as a single continuum from the origin of the universe some 13.7 billion years ago. Paleontologist Teilhard de Chardin saw the world in a state of perpetual evolution, reaching towards higher coherence and forms of Love. Newton saw the world with static pieces interacting with each other while Einstein saw relative or related reality influencing the outcomes of what occurs.

As we lean into what it means to educate for emergence, some of the questions that call for reflection include not just how do we change the educational structures, but how best can we create inviting and supportive bridges between the contemporary, dominant paradigm, and a more inclusive way of seeing. How do we invite children to begin to question the paradigm they are assuming without creating instability? How do we start mapping the world in new ways, creating a whole new dimension of stability, not in spite of but rather because we embrace the way our environment is continually in flux?

This is the kind of questioning and the kind of education that will prepare our young people for a future that we cannot imagine. It’s the kind of education that requires partnership between learners and educators on a journey of mutual discovery. It requires courage to embrace the unknown and the unknowable, while questioning deeply and drawing invaluable distinctions. It changes the dynamics of power and authority between educator and learner, without undercutting mentorship and guidance, which our young people so desperately crave in today’s world, which, at times, seems all but devoid of the wisdom of experience. It opens the way for the type of paradigm shifts that can ignite the emotional will as well as the awakened vision that will bring about a future we all would want to live in.