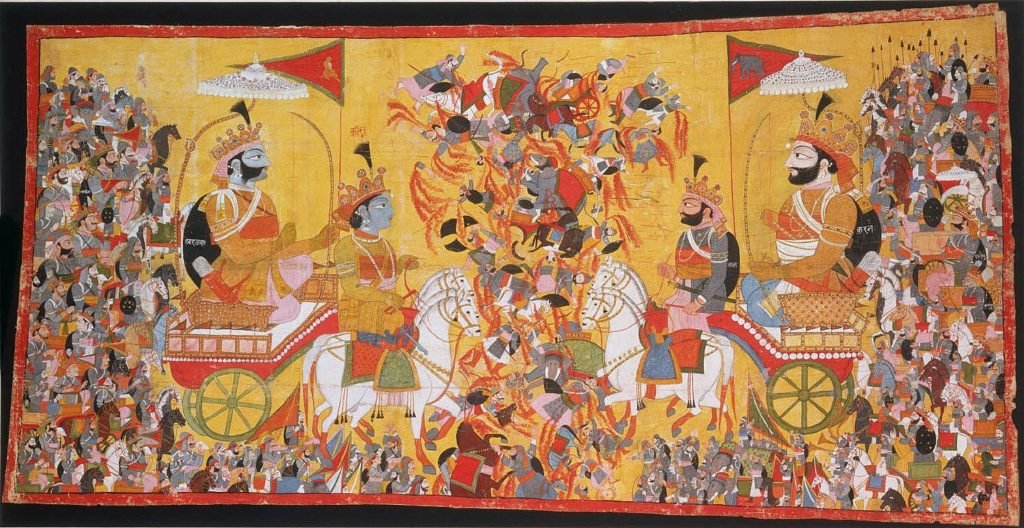 To study the Bhagavad Gita and to understand it culturally and historically, one must begin with the larger context from which we get the Gita – the Hindu epic, the Mahabharata. The Mahabharata and the Ramayana are two famous epic poems from the Hindu tradition, and the Mahabarata, especially, stands apart for being absolutely massive in scale. It is ten times longer than the Iliad and the Odyssey combined, with over 100,000 verses.

In studying the Mahabharata, we are challenged to grapple with whether the poem depicts mythical or historical events. Scholarship won’t help us, as scholars defend both points of view. Some stand by the argument that it depicts historical events with fictional characters. As Sudipta Bhawmik says, “The characters of the Mahabharata might be fictitious, but their dreams, ambitions, and flaws are very real and still exist in us.” Maha means “great” or “extended”; Bharata means “the land of king Bharat” (in fact, India today is still called Bharata); therefore, the Mahabharata is the story of the great Bharat dynasty or the people of India. On a deeper level, we could think of it as the story of ‘everyone’, which may have, hidden in it, gems for our own lives. In reading it, we are offered an opportunity to suspend disbelief to explore the meaning and metaphor that is rich in the text.

This epic tale, written in Sanskrit, is said to have been compiled by the great sage Maharishi Krishna Dwaipayan Vyasa, who is also known as one of its protagonists. In its first book, we learn how Vyasa asks Lord Ganesha, the elephant-headed god, to transcribe the text for him while he dictates. Ganesha says that he will, but under one condition: that Vyasa never pause. Vyasa agrees under his own condition: that Ganesha only write the shlokas (verses) down when he fully understands them. Cleverly, this allows Vyasa to take breaks, giving Ganesha a dense chunk of the story to ponder when he’s feeling winded. And so Ganesha, breaking his right tusk, uses it to transcribe The Mahabharata, all the Upanishads and the eighteen Puranas. In Hindu iconography, you’ll see Ganesha depicted with a missing tusk.

Vyasa, in his own right, is said to be an expression of the god Vishnu (the sustainer), who has come down to Earth to write these stories and make them accessible for everyone. Originally, the Mahabharata was shorter, but over the ages, many contributed more chapters and verses to the text, in turn evolving it into the great epic it is today. Thus, when we consider Vyasa as the original author, we might consider the later contributors as themselves avatars of Vyasa, appealing to the common Hindu theme of an immanent divinity as author working through many beings, and not any one egoic person.

The Mahabarata tells the story of the Kurukshestra War, which was fought between two groups of cousins (the Kauravas and the Pandavas) for the throne of Hastinapura in a kingdom called Kuru, over a span of eighteen days. Many heroes die on both sides. Vyasa is grandfather to both the Kauravas and the Pandavas. Though there is no mention or even evidence of this war in Vedic literature, historians have now concluded that a “great war” did, in fact, take place and that it was a war that marked the end of an era. It is also said by some that this great war marked the transition into the Kaliyuga in 3102 BCE, which is the last of the four stages of the world, the age of Kali, or the age of vice. It is also known as the age of discord and contention. Others date the war to 15 BCE, much later than the yuga, but there is not enough evidence to support any particular set of dates.

Finally, we come to the Bhagavad Gita or “The Song of God”. Comprised of eighteen chapters and seven hundred shlokas, the Gita, as it is often referred to, is the climax of this great epic. It has become a canonical text on its own, and is often mostly considered and read apart from its wider text of the Mahabharata.

The book opens on the famous Kurukshestra battlefield where our hero, Prince Arjuna, is on his chariot, bow in hand, with Krishna, his charioteer. He is on one side of the field and is accompanied by his brother Yudhisthira, the rightful king. Awaiting on the opposing side are Arjuna’s cousins, led by Duryodhana, the evil son of the blind King Dhrtarasta, with intentions to to usurp the kingdom in battle. The conchs go off; the armies call out. Conchs are often associated with spirituality, so we already know that this is no ordinary war; this is a spiritual war.

In the moment of the Gita, Arjuna has the opportunity to right a great wrong in society. However, no matter what action or non-action Arjuna takes, people he cares for, his own blood, will suffer, and many will die. There is no way out of it this impasse. In his despair, Arjuna freezes. Krishna, who happens to be his charioteer and teacher (representing the teacher of all teachers) helps him find his way by discussing the impermanence of all life and his Dharma to proceed with his destiny. So the story begins, as Richard Freeman so eloquently states in his book, The Mirror of Yoga, ”[…] where the fields of dharma, religion, and deep idealism meet the field of action in practical, grounded necessity.”

Fire will always be accompanied by smoke, and Arjuna finds himself temporarily debilitated by the possible smoke from his fire. The nature of action is that it will always leave a residue. Both good and bad actions can have positive or negative effects, and Krishna is there to counsel him to act in accordance with his path, despite the potential effects.

Krishna paradoxically explains that everyone on the battlefield has always been there and will never be there all at the same time. The atma will live on regardless of what happens on the battlefield. That the atma, or the essence of the soul, does not change, is the unwavering philosophical principle of the Gita. This teaching is meant to enliven and enrich every living moment, inspiring you to suck the sweetness out of life, as philosophy or theory meets and tackles the present moment. That meeting place is electric.

In The Gita, Krishna teaches Arjuna how to live out his dharma by moving through karma yoga, jnana yoga, dhyana yoga and bhakti yoga. He is very methodical in his proposal. He shows Arjuna tolerance. If one grows more tolerant, it is harder to take things personally and easier to remain in the space of ease and flow. In the space where you do less, there’s a sense of leaning back and letting the universe do.

Though the generally accepted view of the Gita today is that of a spiritual and peaceful guide book, it has not always been seen this way. In fact, in the Gita, Krishna is encouraging Arjuna to go to war with his family. He says it is his destiny, and he cannot get out of it, even if he wants to. He says it is better to fulfill your own destiny poorly than someone else’s. The book was acknowledged as a full blown call to war, a bellicose treatise, if you will.

That was the dominant  interpretation of the book until 5000 years later, when once again Bharata was being usurped by an invasion, this time by British. And once again there was a ‘great soul’ a Mahatma that lead the troops into battle, only this time, it was Mahatma Gandhi. Ghandi was extremely inspired by the Gita and its teachings, asking his own warriors to fight with ahimsa, or non-violence, through non-cooperation and civil disobedience. Gandhi’s movement was surprising and successful; it contributed to great change, even after his death, and also lent itself to a new appropriation of the meaning of the Bhagavad Gita.

It is interesting and important to note that interpreting texts and studying them will very often mirror an individual’s cultural context – the norms and values shaped and formed by society, education, religion, and history. The translation of the text into a new language can additionally flavor one’s understanding of the text in deep and sometimes not so obvious ways. This is why the best way to learn about something is to go as close to the source as possible. If you fail to get close enough, you run the risk of using your interpretation as a way to justify and peddle your own philosophy and habits.

But, then again, seeking truth is always a bit like this, always acknowledging the shifting tapestry created between what is seen and the one who is looking.