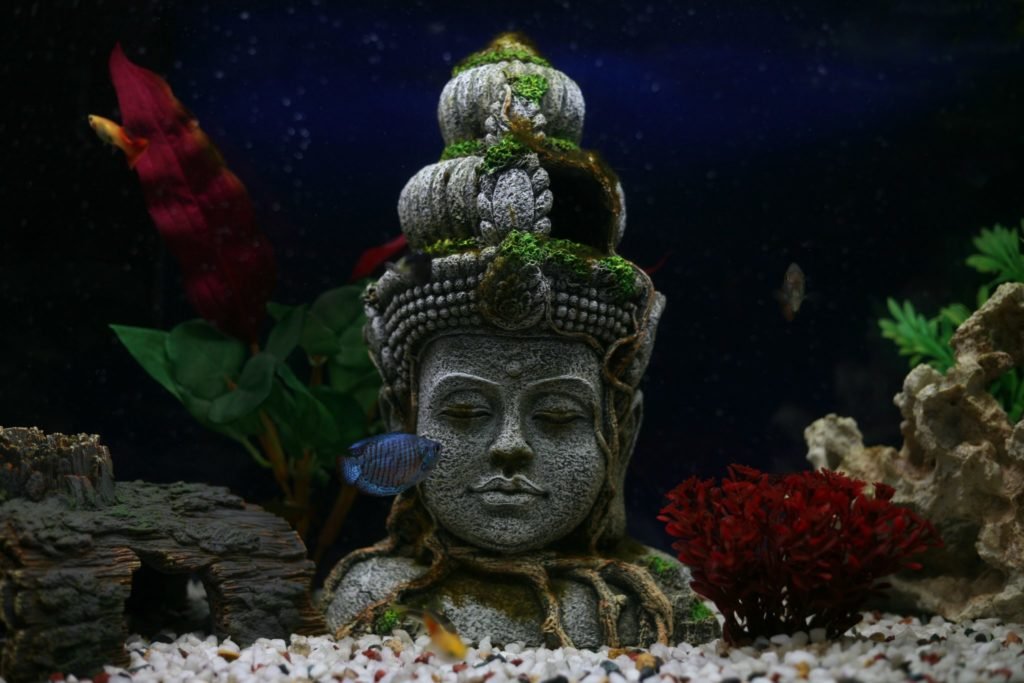 Pārvatī had a singular desire—to win Śiva, the greatest of gods, as her husband.

At first, she attempted to beguile him with her beauty and charm, which he ignored entirely with his eyes firmly shut in samādhi. She then sent Kāmadeva, the Cupid of love, to transform his ascetic’s cave into a pleasure garden replete with spring blossoms, singing birds and celestial dancing nymphs hoping to entice Śiva away from his meditation. Instead, the scene aroused only his anger as he reduced all that beauty to ash with a flare of wrath shot forth from his third eye.

Śiva then returned to his chillum smoking and tapasya, while Pārvatī fumed. Again and again, she tried to attract his attention to no avail. He simply was not interested in giving her what she wanted.

Then she resorted to the most powerful action that has accomplished everything from Bhagīratha bringing down the Ganges River to Mahatma Gandhi winning India’s independence. She refused to eat.

Entering a forest, Pārvatī sat in one place until ants built a mound around her motionless body. She focused all her attention on what she desired most but couldn’t have. And she ate nothing—“not even a leaf”—for a full 10,000 years.

The forest ascetics marveled at her resolve and named her Aparṇā, “the leafless one.” They began to revere her as they would Śiva, Lord of Yogis.

Śiva felt their loyalty shift while seated in his cave and it disturbed him out of his trance. Now awake to the world, Pārvatī’s power pulled him toward her and he became her slave. Her denial of food was the deciding action. Śiva agreed to the marriage.

Similarly, from the Vedas to the Purāṇas, fasting has been the final resort to coerce the gods into granting one’s most cherished desire, which was otherwise denied. From renunciates refusing food to attain the highest liberation, to politicians intent on manipulating the public, to family members getting their way in domestic standoffs, fasting is the most expedient method to accomplish one’s goal.

To not eat is the singular most powerful act an aspirant can undertake. It makes one more powerful than the Creator itself because it deprives creation of its lifeforce. It brings it to a halt.

Ultimate reality itself is made up of food and as the eater of food, a human is mere fodder for the higher power. By refusing to eat, however, one reverses the natural hierarchy. Human and god—relative and Absolute—literally come to a standoff.

In Vedic Sanskrit, the word for “fasting,” is upavasa. It means to “dwell” (vasa) “up close” (upa). Its meaning is distinct from the Puranic, vrata, which is a vow undertaken to attract a god or troublesome planet’s benevolent gaze and which may or may not involve the complete denial of food. A vrata is more of a promise; upavasa is a command.

By “coming up close” to the heart of this very creation (which is food), one will get what one wants—or else—because the intelligent, subjective consciousness underlying creation depends on the feeding cycle for its very existence. When we eat, creation is sustained by our consumption. Because we aren’t separate from the Absolute, our eating allows its sustenance by it literally eating us. The eater eating gets eaten.

This is the principle behind the concept of prasād, which is the food that’s been offered to the gods before taken by the devotee. In traditional Hinduism, any food prepared is always first presented to the Divine before being ingested.  In eating the blessed remains of the offering, the eater herself is consumed by who ate it first. When one refuses to eat, the cycle is broken. And God is coerced to listen to the demand.

Upavasa is a form, therefore, of emotional blackmail wherein the one making the demand attains invincibility over the invincible. It’s a potent yogic technique for transforming a sinner into a saint by disrupting the natural order.

Examples abound in Indian literature and folklore regarding the extraordinary states of consciousness one acquires by the denial of food. The famed “yogini who never eats,” Giri Bala (whose story is recounted in Paramahansa Yogananda’s Autobiography of a Yogi) provides us a glimpse into the spiritual attainment acquired by fasting.

Starting out as a fight with her mother-in-law, Giri Bala undertook a fast to win the upper hand as a disempowered new bride. Her resolve gained momentum and what began as a conflict of wills transformed into a spiritual awakening. Giving up food altogether for fifty years, she nourished her body by drawing in sunlight through the medulla oblongata.

R.K. Narayan’s novel, The Guide, recounts a similar transformation in which the central protagonist, Raju, fools the villagers of Malgudi into believing he’s a genuine saint. Having been just released from jail, he takes up residence in a temple where he’s mistaken for a sādhu.

Enjoying offerings made in exchange for his spiritual counsel, Raju encourages the deceit. But when drought hits and famine threatens the community, he’s expected to use his “yogic powers” to bring upon the rain. He has no choice but to comply lest he be discovered as a fraud.

For twelve days he goes without food and water, desperate for his demands to be heard. In the end, even a liar and a cheat like Raju commands the gods to listen. And they do. It pours down rain. The village is saved. And he’s transformed from conman to enlightened sage.