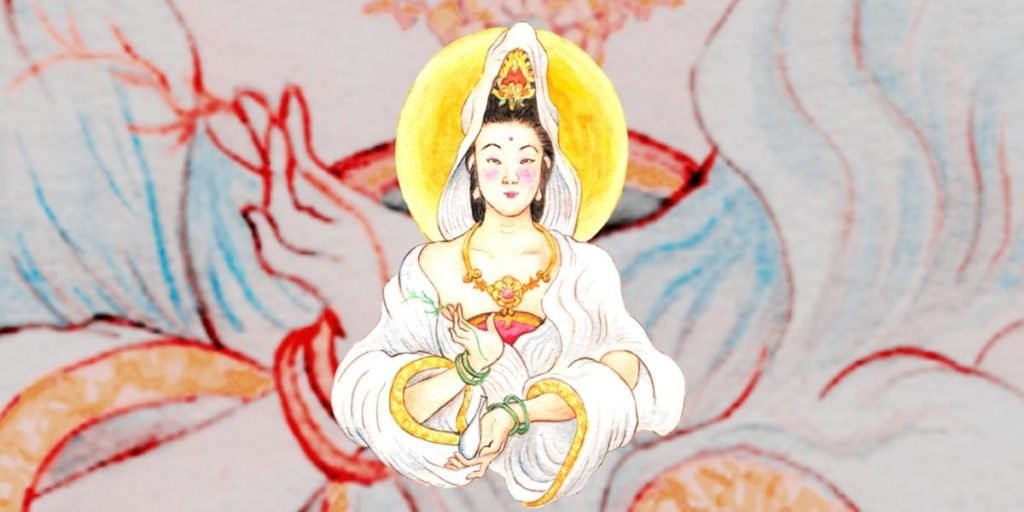 Tranquil and composed, representations of Kuan Yin loom in the shadows of Buddhist temples, museums, and Chinese restaurants. With a name that means “one who hears the cries of the world,’’ Kuan Yin provides solace and inspiration, not unlike the Madonna or Guadalupe. But the legends associated with Kuan Yin are differently complicated than those of her Christian counterparts. She/he — perhaps “they” is best — is sometimes described as having once been a man, but is now a woman, and, other times, as a being with the ability to appear as a man or a woman. There is a fluidity to Kuan Yin’s shifting gender that can startle, intrigue, and comfort. As a figure that transcends maleness and femaleness by embodying both and neither, Kuan Yin illustrates an embrace of embodiment that avoids the usual traps of gender essentialism. As a trans image, then, Kuan Yin is well situated to help us imagine how we might take sex/gender very seriously even as we may always already be transcending it.

Kuan Yin, the most popular of all bodhisattvas, or “Buddhas-to-be,” is the quintessence of compassion. In fact, their very name means ‘‘She Who Hears the Cries of the World,’’ and countless devotees, especially women, continue to seek inspiration in their presence. Kuan Yin seems to have begun their career in India in the first centuries of the Common Era as the male figure Avalokiteśvara. That image reached China as early as the first century, and continued to be depicted as male until some time later. By the twelfth century, female depictions were common in China and Japan. By contrast, the internationally celebrated fourteenth Dalai Lama, Tenzin Gyatso, is regarded by Tibetan Buddhists as the latest in a long line of Avalokiteśvara manifestations, all of which are male.

There are various explanations for Kuan Yin’s gender transformation across time and borders. But while the changeability of Kuan Yin’s gender is no secret, it also has not been emphasized a great deal by traditional Buddhists, even in contemporary settings. But given Kuan Yin’s popularity, and the paucity of historical trans images, it should come as no surprise that Kuan Yin has generated some interest among trans people. In this context, she not only fulfills some of her traditional functions as an icon, but also provides a deeply historical and spiritual sense of tradition and validation to a marginalized group.

That trans individuals have discovered Kuan Yin’s gender transition has been evident for a number of years, for example, from references like this one from blogger Stacie Ku: “Even if I didn’t grow up worshiping her, once I found out she was transgendered, she would have made my list of favorite deities anyway.” A blogger who was writing a novel whose main character is trans said she designated Kuan Yin as one of the character’s ‘‘role models.’’ Another website, ‘‘The Spirit of Transgender,’’ contained an image of Kuan Yin alongside an apparently trans Native American image. The website’s language demonstrates just how seriously this trans connection to spirituality has been taken: ‘‘We are Spirit manifesting in human forms. Let us live that truth, and help everyone see the beauty and strength that lies beyond the constraints of gender. And let us give thanks for the unique opportunity to do so.’’

In addition to her power as a trans icon, Kuan Yin can also help circumvent some pressing theoretical issues in feminism. In short, Kuan Yin can help take us beyond some of the impasses that seem to arise as a result of dichotomous universal versus relativistic, and universal versus particular thinking. First, icons in general, as stylized visual images, can serve to bridge the apparent chasm between universalism and relativism that challenges feminism, and, second, Kuan Yin in particular, as a trans icon, is especially promising for reaching across some of the identity debates that have been especially challenging for feminists.

The Kuan Yin image lends itself to contemporary appropriation, in part, because it is itself the result of a long and tumultuous process of assimilation. As Kuan Yin made the long trek from India, across the Himalaya into Tibet, and then on to China, Japan, and beyond, they have been transformed in countless ways and for countless purposes. Moreover, even Kuan Yin’s shifting gender also seems to have been, in part, a way to make this icon fit within the time and needs of the people. This is not a fact that should be glossed over, for it is one of the powerful features of Mahāyāna Buddhism that one use upaya, or ‘‘skillful means.’’ That is, the dharma should be communicated according to individuals’ own capacities for understanding and their particular situations.

In an interesting way, icons can exude power in the practical landscape as words, perhaps, cannot. One author describes icons as ‘‘a form of ecumenism without words or arguments.’’ They can function with a flexibility and immediacy that words seem to lack, to express something between universality and particularity. Icons are, by definition, stylized images, and to this extent they can be thought of as emphasizing the universal. According to historical practice, moreover, there have been rules for their reproduction, and even up to contemporary times great care is often taken to make sure that there is a resemblance among images of the same sacred figure. The traveler recognizes Kuan Yin or Guadalupe in faraway shrines but also notices the icon’s distinctiveness. Icons can, then, be recognized both as universals and as existential examples at once.

Consequently, one contemplating Kuan Yin might feel themself to be both bonded with similar others, but also in touch with their own uniqueness. In fact, this seems to be expressed in the accounts people give of their experience with Kuan Yin, of the dissolution of individual identity along with the sense that one is being cared about, and in a deeply personal sense. Western feminist Buddhist Sandy Boucher describes such an effect: ‘‘Her spirit and her example help me to stay focused to home and enable me to be intimate with my true nature instead of backing away into rejection or criticism. While sometimes I feel extremely vulnerable, Kwan Yin lets me realize that my only safety lies in the emergence of the tenderest part of myself, to meet the needs of each moment.’’

Feminists have long demanded recognition of personally, socially, and politically significant aspects of identity without consenting to being wholly defined by any one of them. This ambivalence about the importance of gender is also reflected in Buddhism. For example, in the story of the ‘‘dragon girl’’ in the Lotus Sutra, an extraordinary eight-year-old is said to have such wisdom and skill that she can attain enlightenment despite her age and sex. In order to prove her ability to the Buddha, the girl first quickly assumes a male body and then achieves enlightenment. Because Buddhism often claims, in sexist fashion, that females are subject to special obstacles, the girl’s sex change is a necessary step. But this loosening of sex/gender from its standard biological moorings to accommodate the wishes of an audacious little girl is revolutionary nonetheless.

Kuan Yin may be able to express what metaphysically obsessed, essentialist, and anti-essentialist theorizing ultimately cannot, the possibility of being both and neither. With respect to gender, for example, they are not simply an androgynous character, but one who, never having determinately slipped from male to female, might also slip back, or linger tranquilly in between. It is an image that challenges some of the terms of the gender essentialism debate. Even accounts that emphasize gender fluidity, for example, as a kind of story-line, cannot do full justice to them, for the ‘‘story’’ of Kuan Yin breaks off at various points, not only in terms of gender, but with respect to nationality and social class as well. In this sense, Kuan Yin seems remarkably contemporary, capturing the idea that a trans identity need not be limited by the categories of male, female, or much else.

In order to fully appreciate their transgressive potential, we must first recognize that Kuan Yin cannot be said to be a man or a woman in any of the usual senses. She was not ‘‘born’’ a woman, but rather was somehow transformed from the male bodhisattva Avalokiteśvara over a period of centuries. However, as we have seen, it is not even quite correct to conclude simply that Kuan Yin was a male and is now a female, for they continue to be depicted as both. To further complicate things, they are often described as having an androgynous or “asexual’’ appearance. In short, although, for many, Kuan Yin is experienced simply as female, a glimpse at their story quickly explodes our familiar sex/gender categories. In short, they are a quintessentially trans icon in the queerest sense.

But perhaps the deepest lesson we can learn from Kuan Yin is that there is a sense in which we are all much more like them than most of us know. In a world that continues to operate according to simplistic versions of sex and gender even as our philosophical theories challenge them, it may be useful to expand our notion of trans in the momentary company of Kuan Yin. Although this is less true than it used to be, most of us continue to clutch onto the privilege of received, normative sex/gender identities. But sitting on the ground in her pose of ‘‘royal ease,’’ one leg up, bent at the knee, eyes full of equanimity, with a deep, ethereal, knowing peace, Kuan Yin does not grasp or cling. They live out the promise that our ideas and certainties about who and what we are can serve as conceptual and imaginative tools with which we might help one another negotiate a lovely, difficult world.