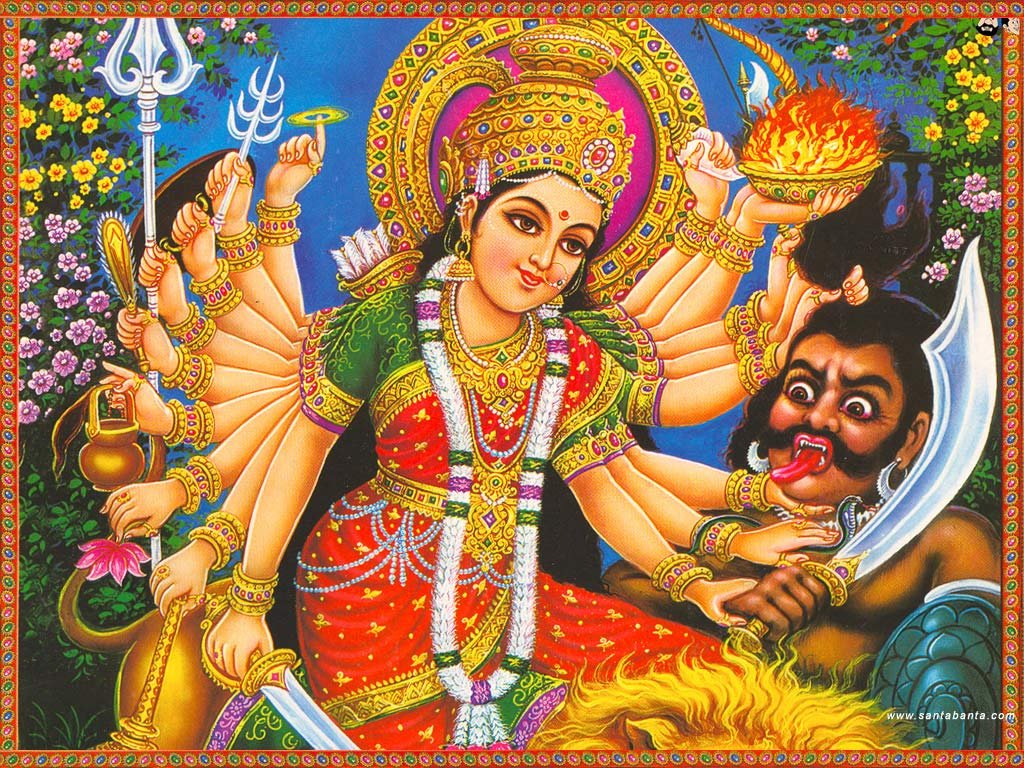 The question of the Hindu goddess’s feminism is embedded within the larger question of the instrumentality of religion in the post-colonial nation – both for a ‘secular’ politics and for women’s struggles in mass movements – and thus, moves far afield of a de-contextualised if more focused consideration of an answer. This article attempts to problematise some of the connections between the Hindu goddess and feminism, between religion and women and the locations, theoretical and political, from where disagreement is articulated.

There are many voices that join this debate, identifiable, broadly, as those of Indologists and south Asia area studies experts in the western academy from different fields (religion, anthropology, philosophy, psychology, language and culture, history), whose disinterested scholarship and academic discussion of the Hindu goddess is given a political edge by being addressed in this pointed fashion, and those of Hindu worshippers, Hindu ‘nationalists’, feminists of varying hues, left secularists and others who are located within contemporary social movements and politics in India, for whom the goddess is, as we might expect, primarily a symbolic resource. Thus, the implications of the ‘is’ in the question: ‘Is the Hindu Goddess a feminist?’ would differ, from the universal present tense indicating a perpetual condition or an indication of abstract potentiality (as it were, can the Hindu goddess be feminist?) in the former instance, to a historical present tense, our contemporary context, local and global, within which the question would resonate with the deployment and role of a majority religion’s idiom in a post-colonial ‘secular democracy’, India, in the latter.

Despite the different locations of these voices, in response to the question they may be allied in and through their common perception of the goddess’s ‘feminism’. One section of respondents would be agreed that the goddess ‘is’, indeed a feminist, that being a feminist is a good thing to be for a goddess, and that this position is enabling, that s, it is in the interests of women, India, Hinduism and Indian women. From the other side, for reasons that I shall be rehearsing shortly, the conclusion will be called into question. I shall bocus on the disagreement centring on the last claim, but shall treat certain other definitions as starting-points and assume certain ideas to be consensual: one, that ‘feminist’ here will man ‘pro-woman’, ’empowering women’; two, that Hinduism is the only contemporary world religion that has a tradition and continuing practice of goddess-worship; three, that Hindu goddess-worship is radical insofar as the goddess is not inscribed in the mainstream of deities and her devotees are drawn largely from lower castes, women and even non-Hindus, thus clearing certain spaces of alternative belief and practice in the monolith of brahminical Hinduism; and finally, that it is not only the existence and worship of the goddess, but also her representations in ‘feminist’ ways – as complementary ‘female principle’ as autonomous female agent, or as powerful cosmic force – that are under discussion here as aspects of her ‘feminist’ recuperation.

To talk of ‘the’ Hindu goddess as if she were a single or composite figure is, of course, already problematic. The debate over the meaning of the goddess would have to take into account the range and diversity of her representation, the sheer numbers of goddesses, major and minor, mainstream and ‘local’, that are to be found in the pantheon. David Kinsley’s Hindu Goddesses provides a useful list, and also a chronological history of the evolution of various goddess-figures, and John Grimes’ essay on Hindu goddesses constructs and taxonomy based on their different functions, provenance and attributes. One direction for the discussion to take would be to examine the distinctive attributes of different goddesses, or the anthropological aspects of their cults and worship, in order to decide upon their greater or smaller potential for feminist appropriation. It would be generally agreed that despite the great symbolic value and veneration bestowed on the consorts of the trinity, the goddesses Lakshmi, Saraswathi and Parvathi, it is the autonomous constructions of female divinity such as Kali, Durga and their numerous spin-offs, who are representative of ‘stri-shakti’ (woman-power), and are therefore of relevance in this discussion. I shall sidestep the more nuanced and elaborate discriminations that this discussion would call for. As I clarified earlier, even if one does not dispute the claim that these goddesses belong to the ‘radical’ rather than mainstream–hence more patriarchal–tradition of Hindu social and religious practice, the implications of such radicalism are open for contestation.

In my view the recuperation of the/an Hindu goddess as feminist is problematic at the present historical juncture both for its assumption of an undifferentiated ‘woman-power’, as well as for its promotion of a certain radicalised Hinduism. Some Indian feminists, among whom I count myself, would be cautious of buying into the constituency of ‘women’ by extending the scope and politics of contemporary Hinduism. I shall however first rehearse, briefly, both sides of the debate over the question, though the arguments are likely to be familiar ones. I shall push them further by interrogating their politics: Who is saying this? Who is opposing it? What is at stake here? What investments can we discern in the investment in the goddess? What are the grounds of scepticism? These will lead to the elucidation of my argumetn in the concluding section of the paper.

To read the rest of the article, and to access the Notes and References, download the Issue PDF.