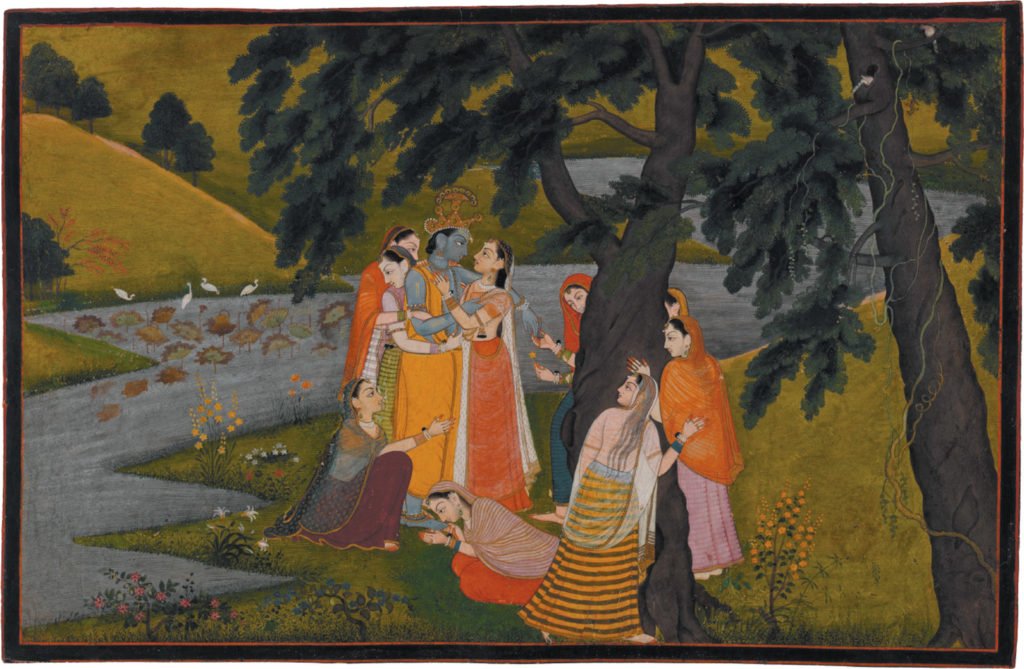 Whenever there is a decline in dharma…
I create myself.
I come into being from age to age with the purpose of fixing dharma. 1

With these words near the beginning of the Bhagavad Gītā , Kṛṣṇa explains to Arjuna the fundamental reason for his incarnation on earth at the time of the Mahābhārata war between the Pāṇḍavas and the Kauravas; a cataclysmic war in which almost all of the combatants perished.

Dharma is a term that defies translation. It encompasses notions of law, duty, ethics, justice and religion, and is reflected in the norms of duty or conduct allotted to each individual, usually by reference to his or her status within society, sex and/or stage of life. The idea of “fixing” dharma suggests a triumph of good over evil, a restoration of righteous behaviour and public order, brought about through Kṛṣṇa’s divine intervention. Yet, in order to achieve that fix, the apparently divine Kṛṣṇa not only allows a “horrific, genocidal bloodletting,”2 he actively encourages the war to begin; even when the extent of the carnage and its outcome are apparent, he allows the war to continue to its bitter end. Moreover, on numerous occasions during the war, he intervenes to ensure a positive outcome for the Pāṇḍavas, not by resorting to “divine powers,” but by resorting to tricks and stratagems that broke the rules of engagement and clearly went beyond the idea of dharma as understood by the war’s protagonists. How does this seemingly non-dharmic action square with the divine “fixing” of dharma? Is this really the behaviour of a supreme deity? Is Kṛṣṇa’s divinity called into question by these episodes, or do we need to examine his method of fixing dharma more closely? In other words, is Kṛṣṇa ambiguously divine or are his actions divinely ambiguous?

The drawn out war between the Pāṇḍavas and Kauravas was not a free-for-all without any rules of engagement. Rather, the Mahābhārata tells us that the parties agreed detailed rules governing their combat, which, for example, forbade the attacking of those with a broken weapon. It is fair to assume that these rules were not devised specifically for this war, but represented common principles of kṣatriya-dharma, the rules and standards of the warrior class. There are several instances where Kṛṣṇa intervenes in the war in underhanded, non-dharmic ways that go against this warrior code in:

– He persuades Arjuna to hide behind Śikhaṇḍin, who in a previous life had been female, in order to kill the Kaurava general Bhīṣma, who had taken the rather curious vow never to fight someone formerly a woman.

– After five days of suffering at the hands of Droṇa’s armies, Kṛṣṇa exhorts the Pāṇḍavas to “cast… aside virtue [and] adopt now some contrivance for gaining the victory” (7.191), which, at Kṛṣṇa’s suggestion, they do by killing an elephant with the same name as Droṇa’s son, then reporting the death to Droṇa, who inconsolably lays down his weapons.

– When the Kaurava general Karṇa’s chariot sinks into the earth, Kṛṣṇa violates the rules of engagement on broken weapons agreed at the outset of hostilities by persuading Arjuna to take advantage of Karṇa’s situation and decapitate him. Even after the final battle, he encourages Bhīṣma to strike Duryodhana on the thighs (literally ‘below the belt’) and mortally wound him, again contrary to  kṣatriya-dharma.

What is going on here? Why does the self-proclaimed “fixer” of dharma blatantly ignore his non-combatant status and encourage others to break accepted rules of engagement when he might have stopped the whole thing through more benign divine intervention? Was he simply unable to influence events any other way, or did he choose not to? And if the latter was the case, what was his motivation?

It has been argued that omnipotence was not a necessary characteristic of Indian divinity, and that, accordingly, the compiler of the MBh chose realism over fantasy in his portrayal of Kṛṣṇa’s powers, presenting him as not in possession of the divine power to intervene in the war in any other way. However, this argument sits uneasily with the portrayal of Kṛṣṇa in the BhG, where Kṛṣṇa describes himself as “the origin of all” (BhG 10:8) and explains that “whatever powerful being there is… comes to be from only a small part of my brilliance” (BhG 10:41). There is no suggestion here that Kṛṣṇa’s divine powers are at all limited. If we take the BhG at face value3, any suggestion that Kṛṣṇa is not omnipotently divine seems untenable.

We are left then with two possibilities: Either Kṛṣṇa’s powers were intrinsically limited while on earth, or he for some reason chose not to exercise them in certain circumstances. In an episode in the MBh that takes place after the war, the hermit Utaṅka, who knew nothing of the events of the war, asks Kṛṣṇa if he could have prevented it taking place. Kṛṣṇa denies that he had the power to stop a process that had begun long before and was ordained by destiny. In the realm of gods, he explains, he has all the powers of a god; in the realm of humans, he is limited to “the means and methods available to men.”4  Curiously though, he doesn’t explain how this squares with one of his more supernatural interventions in the war, when he magically turns Bhagadatta’s weapon into a garland of flowers, and his answer is ambiguous: Who imposes the limitations on his powers? As the old paradox puts it, is there anything that an omnipotent being cannot do?

If Kṛṣṇa’s powers on earth really are circumscribed, voluntarily or otherwise, then how does he “fix” dharma and what do the apparently non-dharmic episodes tell us about his method and motivation?

One of the most significant themes of the MBh is what happens when dharmas conflict. Arjuna’s dilemma at the beginning of the BhG is the classic example: On the one hand, his dharma as a warrior (kṣatriya-dharma) is clear – he must fight. On the other, his dharma as a member of a family or society (kula-dharma) is equally clear – to harm his teachers and family members on the Kaurava side would be morally wrong and would have appalling karmic consequences. His initial reaction is to seek to escape from both dharmas through renunciation but, as Kṛṣṇa points out, that will not work as even renunciation involves some form of action.

What we see in Arjuna’s famous dilemma is that dharma – in the sense of what is perceived to be right and wrong in any given situation – is not clear-cut. The conflicts of dharma in the MBh find some of their clearest expression in Kṛṣṇa’s actions in the war. On one level, his role as a manipulator in the deaths of Bhīṣma, Droṇa, Karṇa and Duryodhana clearly broke the rules, or encouraged others to do so. What, though, if he had not acted as he did? We are repeatedly told that the Pāṇḍavas could not have won by fair means. It is equally clear that the Pāṇḍavas had been wronged and were entitled to the return of their kingdom, even if their own behaviour was less than blameless. It is too simplistic ever to portray war in terms of absolute right and wrong. But the only way Kṛṣṇa appeared able (or willing) to prevent what was perceived as the greater wrong of allowing a Kaurava victory was by committing other wrongs.

How then does Kṛṣṇa “fix” dharma? I believe that the answer lies in a shift of approach to the concept of dharma itself away from an emphasis on (often idealised or ritualised) action performed in strict compliance with the dharma of one’s sex, class or stage in life (“old dharma”), to a more nuanced approach, with different situations calling for different responses, irrespective of the old ideals (“new dharma.”) My argument is that Kṛṣṇa consciously restrains his divine powers and acts as he does in order to demonstrate to the Pāṇḍavas that strict adherence to “old dharma” would lead not only to their destruction but also to the destruction of dharma in a wider sense through a Kaurava victory. At the same time, by choosing to act as an apparently flawed human, Kṛṣṇa emphasises the individual’s role in shaping his or her own destiny. Even if the outcome of the war was pre-ordained, the precise course was up to its participants, for, if the whole course of the world in every detail were divinely directed, a coach and horses would be driven through the law of karma. And when that course seemed irretrievably to be going against the Pāṇḍavas, who nevertheless wavered from apparently non-dharmic actions that would assist in achieving the pre-ordained outcome, then Kṛṣṇa had to intervene and do whatever was necessary.

Kṛṣṇa’s divinely ambiguous actions then are a way of highlighting the inherent dilemmas within “new dharma.” Had he simply intervened supernaturally, whether in individual situations or to stop the war, the lesson of the “new dharma” – of individual freewill set in the context of a more nuanced approach to action for the overall greater good – would not have been learned. If he had ensured a Pāṇḍava victory simply by exercising supernatural powers, the human participants would be “reduced to controlled puppets.”5

Conversely, if we take Kṛṣṇa’s teachings in the <BhG on acting without regard for the fruits of action in isolation, anarchy might be the outcome. Kṛṣṇa therefore ends up as “a sort of invisible government which operates out of a parallel order of being… [which] impinges on human freedom and destiny at many, but not every, turn; … its actions have an overall sense about them, even if many of the details are not readily comprehensible…”6

And therein lies the fix: No longer is dharma the mechanical performance of rules, however religiously sanctioned, but nor is it a complete free-for-all. Rather, behaving in accordance with one’s dharma leaves room for human choice within a broader behavioural framework, without the need to attach to the fruits of that choice: To borrow some terminology from the Buddhists, perhaps Kṛṣṇa’s divine ambiguity is in fact introducing us to a “middle path” of dharma?

In the Judaeo-Christian world, we are used to the notion of God as “father”: A largely benevolent authority figure, to whom we are subject in matters of morality, and who exercises day-to-day control over our life. There is a tendency to assume the same sort of paternal quality when we consider the attributes of Indian deities. However, might there not be something in the argument that Kṛṣṇa in the MBh is more of an “uncle” than a “father”: less omni-present and a purveyor of advice rather than discipline? And are not uncles often more ambiguous characters than fathers?7 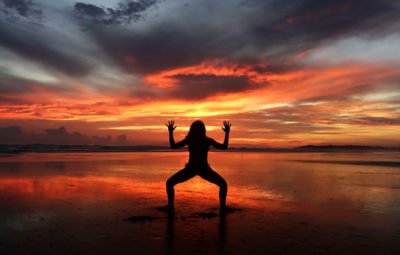 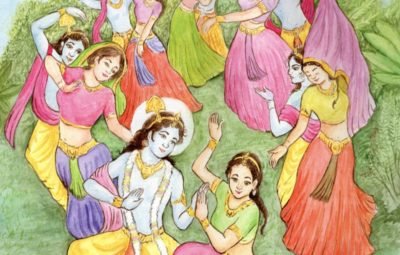