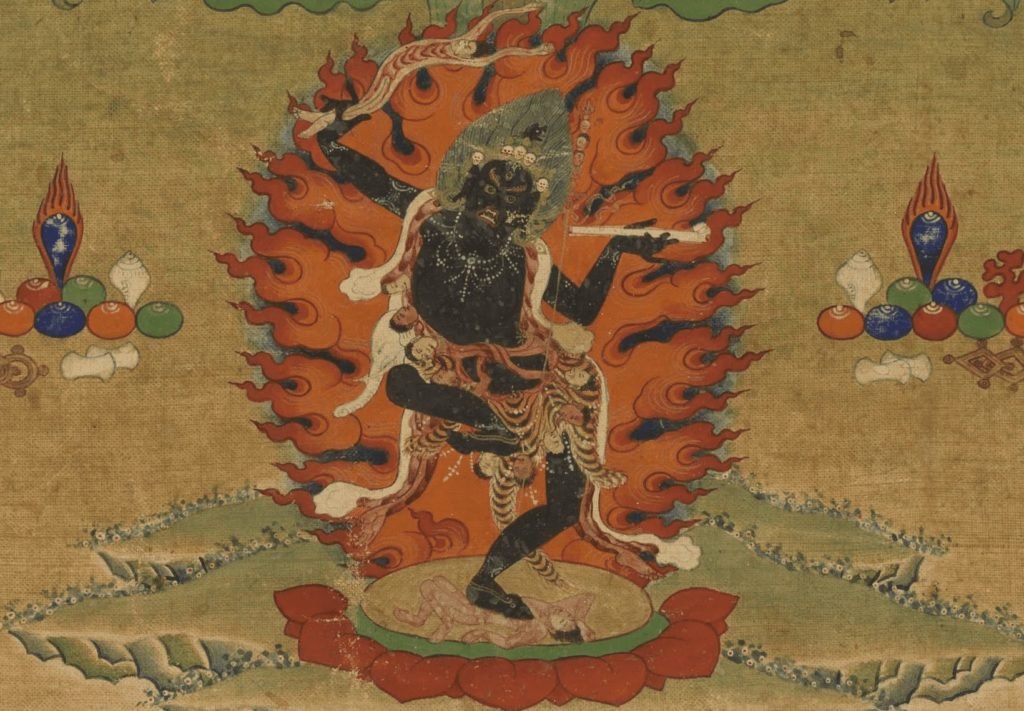 In order to understand the mandala principle, we have to go way back to the beginning, to the basic split. This is the rupture, which created the experience of ”I” and “other” and is at the root of our suffering. There is a Tibetan teaching, the Prayer of Samantabhadra, that explains how this split happened. It states: “One ground, two paths, two results.” Though at first glance this teaching may seem simple, what it describes, in six words, is nothing short of the explanation of our entire human condition.

Let’s start by understanding what “one ground” actually means here. One ground is often referred to as the “ground of being,” or the Great Mother, meaning literally “the ground out of which all beings and all things arise.” Now bear with me; this may be a bit abstract at first, but it’s crucial that we understand the profound meaning of one ground as the very base of our existence: the one ground of being is infinite potentiality from which the whole of the universe comes – the source of all creation.

This infinite potentiality is formless and so vast that it defies any attempts to conceptualize or limit it in time or space. The nature of the ground of being is pure gnostic awareness- it is the intelligence of the universe, or, put another way, the intrinsically intelligent nature of the universe. Radiant light is the expression of the ground of being, as is stated in the famous Buddhist Sutra of Transcendent Wisdom

(Prajnaparamita Sutra): “The mind is not the mind; the mind’s nature is radiant light.”

Now, imagine for a moment that the ground of being is the vast blue sky that has no beginning and no end, no center and no edge, and the nature of this space is pure, infinite awareness. Everything arises from this space; its essence is empty; its nature is radiant; it expresses itself as all-pervading compassion. The “two paths” form when the ground of being expresses itself or self-exteriorizes into appearances by radiating its pure, luminous, rainbow-hued light. Here the mystical ground energies move into exteriorization, manifesting as the five lights: white, blue, yellow, red, and green.

At this point the individual awareness either recognizes that pure rainbow-hued luminosity manifesting as appearances as inseparable from itself, or it sees that luminosity manifesting as a separate world of appearances. In that moment, the split occurs and the two paths are created: the one path of liberation, which recognizes the inseparability, and the second path of confusion, which sees appearances as separate, creating fear and anxiety. This path of confusion forms the dualistic barrier and our ego fixation becomes a way to resolve our separation anxiety, and the result of taking this path is called samsara, the pattern of grasping that propels us through life, death, and rebirth. This is the path that we all took.

Let me use a simple analogy of how our ego fixation and self-clinging mind works. Like a high-security base, our ego, which forms at the moment of the rupture from the ground, sends out agents to explore the outside world and report back. There are three types of reports or reactions: The first is constantly surveying for potential threats, creating aversion, aggression, or hatred. The second report is concerned with making our ego feel safe – desire, grasping, and attachment are born from this. And then the third report is about neither enhancing nor threatening the ego, producing indifference and ignorance.

Aggression, desire, and ignorance – these three reactions or poisons are constantly taking place within us. The plot lines may flip, and what is at first seen as desirable may become threatening or vice versa, or what at first seems irrelevant may later become something to grasp or to reject. The play of these three fundamental poisons creates two more poisons – pride or arrogance, and jealousy or envy. Those are the origins of the five poisons, which I introduced in the last chapter: ignorance, anger, pride, desire, and jealousy. And the way to transform these poisons into wisdom and return to the one ground is through meditation.

All Buddhist practice is about returning to the unified, ground-of-being state, before the formation of the dualistic split between self and other. This split is extremely painful, and so there’s a great longing to overcome it; unfortunately, the way we normally attempt to overcome it- through the five poisons- only increases our suffering.

Meditation practice slows down the reaction patterns of the ego, so that eventually awareness can return to its own source and reunite with the ground from which it has ruptured. When we wake up, we realize there’s never been a separation from the ground of being, although the constant activity of the ego has created the illusion of separation – the clear, blue, spacious sky of our being has been obscured.

As the ego dissolves and our pure potential manifests, it is like the five rays of light that stream out of a crystal when struck by the sun. These five rainbow-hued lights are the basis of the five Buddha family wisdoms.

The key to awakening, then, is recognizing the appearances in the world as the radiance of the essence ground, and our true nature as the vast awaken universe itself. The work with the mandala and the five buddha families returns us to the original luminosity of the ground – we then return home to what is called the Great Mother, the ground of being. The good news is that for all of us who took the second path of confusion, liberation is achievable. All we need to do is stop investing in the dualistic struggle and recognize the true ground of being. The path to liberation is never far from us. We are actually never apart from it. We are simply not recognizing nonduality as our true condition.

This article is an excerpt from Wisdom Rising : Journey into the Mandala of the Empowered Feminine, published by Simon and Schuster, May 2018.